Fall was in the air as carloads of kids enjoyed a drive-through event at the Soboba Sports Complex on Oct. 24. From 6 to 9 p.m., vehicles made their way through a maze of about 30 candy-laden stops during the tribal community’s Halloween Trunk or Treat event.

Most participants were wearing costumes as they sat in the back seats of SUVs or in the beds of pick-up trucks, collecting their candy stash. The need to wear a face covering was taken care of with costumes that included masks and social distancing was achieved by families working with family members at their booths and vehicles containing members of the same family.
Soboba Band of Luiseño Indians entities and Tribal Member families showcased their creative decorating skills with displays that ran the gamut from Charlie Brown to a Clown Carnival. Judges awarded the top three booths with prizes for their efforts.

Third place went to John “Duke” Briones for his display of “Dodgers Nation” with flags, banners, seat covers, posters, jersey, face covering and more that showed off his blue pride and his classic Chevy pick-up truck. He won a Halloween decorated bowl full of treats plus a $25 Visa gift card.

“I’ve always been a Dodgers fan,” Briones said. “When I was little, my dad followed the Brooklyn Dodgers.”

Second place was awarded to Soboba DPS and Public Safety Officer II Thomas Cordova and Administrative Assistant Bernadette Reynolds were happy to interact with everyone that drove past. They also received a bowl of candy as well as a $50 Visa gift card.

“It’s a nice thing that the Parks and Recreation Department was able to do this,” Reynolds said.

The first-place winner was the Arviso family for its Clown Carnival, complete with a Ferris wheel ridden by clowns. The entire family had some sort of clown costume on, ranging from cute to super scary. A skull shaped beverage dispenser filled with candy was their prize along with a $100 Visa gift card.

As cars arrived at the parking lot entrance, Ricardo Macias of Parks and Recreation, made sure each person in the car received a meal ticket to be used at the Carl’s Jr. food truck drive-through as well as a candy collection bag if they didn’t bring one of their own. Members of the Soboba Fire Department assisted with the check-in, when needed, reminding drivers to turn off their headlights before entering the serpentine route that took them past all the booths.
In past years, a trunk or treat event was held during the daytime at the Soboba Tribal Preschool and Parks and Recreation would host a family-friendly Halloween party at the Sports Complex where there would be music, treats and a costume contest.

With the presence of the coronavirus being the scariest thing to happen to everyone this year, it was decided that doing a drive-through event was possible and preferable. Many of Saturday’s attendees said their children were not planning to do any other trick-or-treating or Halloween events this year. But all the fun didn’t end on Saturday as DJ Mike Nevarez, between great songs he played throughout the event, announced that a virtual costume contest was being held for those that send in a photo. Prizes for cutest, most creative and scariest would be awarded in several age groups on Thursday.

After completing the candy collecting, each participant was treated to a pumpkin. Staff from Parks and Recreation carried pumpkins from the pile to each vehicle, making sure all the children got one. C & R Farms in San Jacinto were the growers of 380 pumpkins that were purchased for the event but a few hundred more visitors attended so more have been ordered.

The only exit from the event was down a street that led visitors to a drive-through haunted house, created by the Boniface and Morillo families. Filled with clowns, monsters, zombies and other scary characters, the screams could be heard as cars made their way through more than 70 feet of creepiness to reach the other side.

“We worked for about two weeks on all the props and then came here last night to start setting it up,” Charlotte Boniface said. “The whole family got involved.”

Ray Morillo said her family loves Halloween and growing up she remembers all the parties and haunted houses they hosted.

“We’re big into parties and being together,” she said. “I’m glad Parks and Rec asked us to do this. Everyone is having so much fun.” 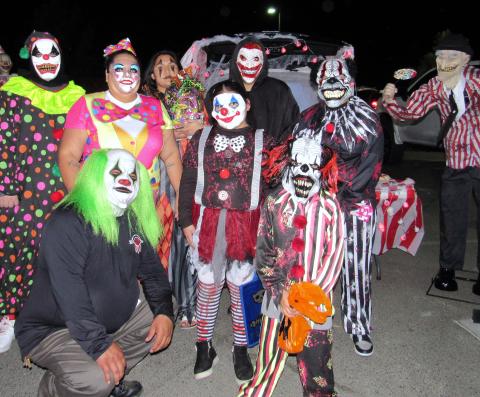 The Arviso family set up a Clown Carnival display at the Soboba Tribal Trunk or Treat event on Oct. 24. They won first prize for their decorating skills 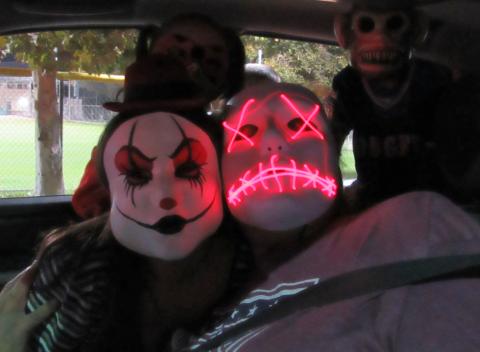 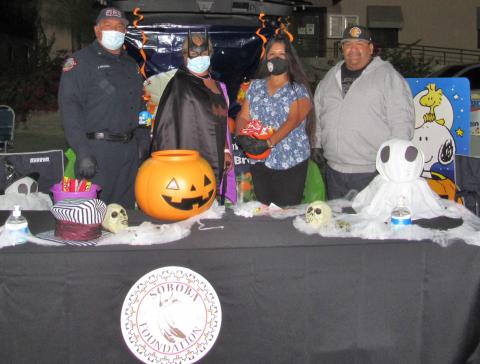 The Soboba Foundation was one of many Soboba tribal entities that were set up to interact with participants in Soboba’s Tribal Trunk or Treat drive-through event on Oct. 24. From left, Soboba Foundation’s Vice President Jacob Briones, President Dondi Silvas and Members at Large Sally Ortiz and Isaiah Vivanco 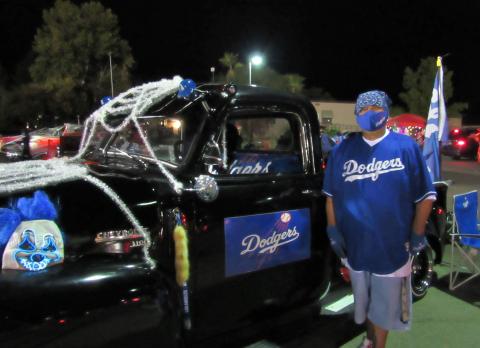 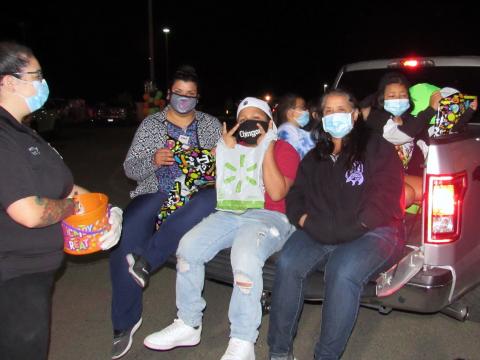 Bernadette Reynolds from Soboba DPS, at left, passed out candy to visitors at Soboba’s Tribal Trunk or Treat event at the Soboba Sports Complex on Saturday 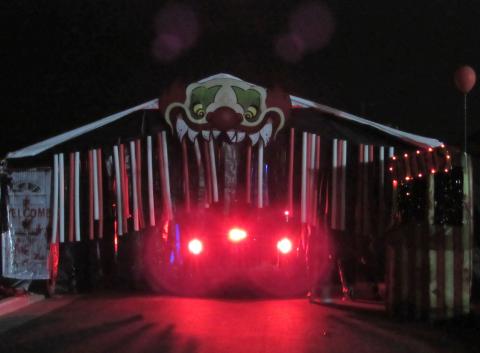 A drive-through haunted house was created by the Boniface and Morillo families as a traditional Halloween end for those that took part in Soboba’s Tribal Trunk or Treat event on Oct. 24