The Soboba Parks and Recreation Department hosted its second annual Light Parade and Tree Lighting Ceremony on Dec. 19. Starting near The Oaks and traveling down Castile Canyon Road to the Sports Complex with a Soboba Fire Truck escort, about 10 vehicles were decked out with bright lights, music and lots of holiday cheer.

“This is my favorite event to put on,” said Jennifer Garcia, the department’s activities director.

RZR off-road vehicles were festively decorated as were pickup trucks and other vehicles. Sweetie Miguel and Christina Torres had an off-roader decorated with items from Tim Burtons’ Nightmare Before Christmas movie.

“This event is just so fun – it’s so awesome to see the kids’ faces when we drive by,” Miguel said. They had bags full of candy to toss to residents who were tailgating along the two-mile parade route that ended at the Sports Complex. Bianca Machado highlighted the Grinch Who Stole Christmas on her vehicle.

“The Grinch kidnapped Christmas so I kidnapped him and tied him up with strings of Christmas lights,” she said with a smile, although the Grinch did not look too happy strapped into the back of her truck. “Everyone loves the Grinch – he’s so underrated.”

Trista Marquez entered the light parade for the first time and her car included an oversized Santa Hat that covered her car’s entire roof, which she made herself.

She was among the top three winners who received a $50 Amazon gift card. Others were Wayne Nelson and Junior Medina. Delbert Briones was one of four riders with Medina.

“We wanted to make it look icy and cold with the blue lights on top but then added other colors on the bottom to make it look more Christmassy,” Briones said. Nelson’s children, who ranged in age from 7 to 14, had pitched in to decorate the truck with strings of lights and an outline of Micky Mouse on its grille.

“We saw the parade last year and thought it looked like fun so we got involved,” he said.

The cars were parked alongside the Sports Complex field where a pine tree was lit up after a countdown by the many families that were at the park for the celebration. Hot cocoa, cookies, entertainment courtesy of The Los Angeles Belles singers, and last-minute gift item vendor booths, gave guests lots to do. There were also raffle drawings for early Christmas gifts, bringing smiles to many faces.

Miniature horse rides and a bonfire to keep hands and feet warm on the chilly night were set up in the sand pits next to the complex.

“Our kids are ready for Christmas,” said Jared Miranda who was with his family that included three children, ages 1, 3 and 5. “We just wanted to take part in this community event and it’s been fun.” 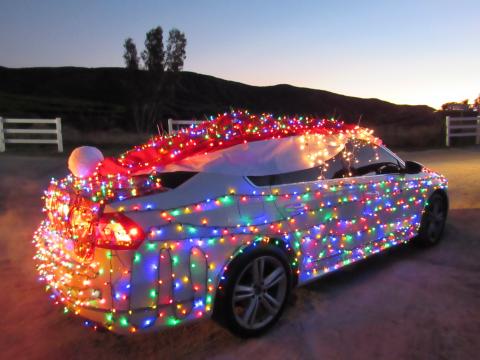 Trista Marquez was one of the winners of the Soboba Light Parade on Dec. 19. Her decorated car included an oversized Santa Hat for the roof, which she made herself 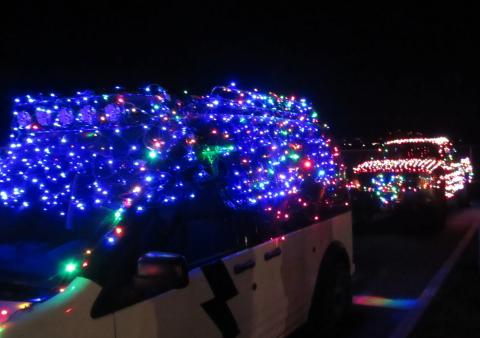 Junior Medina’s vehicle, at left, and Wayne Nelson’s pickup truck were among the top three winners of the Light Parade contest held as part of the second annual Soboba Parks and Recreation Tree Lighting Ceremony and Light Parade on Dec. 19 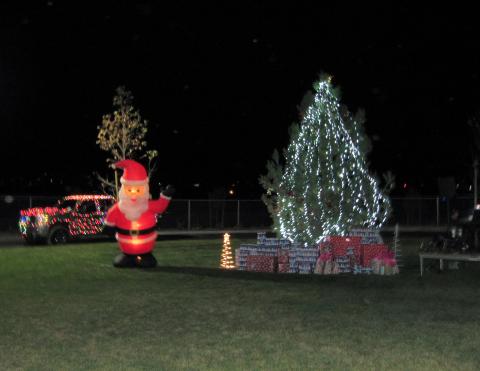 Some of the Light Parade participants kept their cars lit as the decorated pine tree at the Soboba Sports Complex was lit during a ceremony on Dec. 19 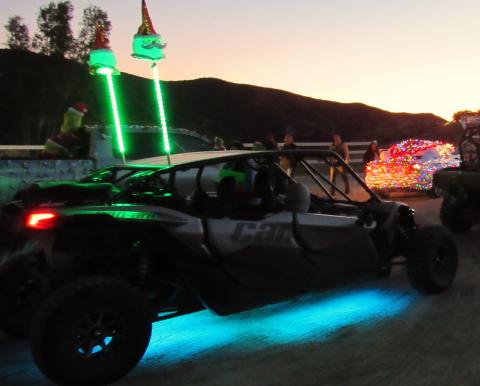 Eric Adame went all out with lights above and below his RZR as one of the entrants in the light parade at the Soboba Reservation on Dec. 19 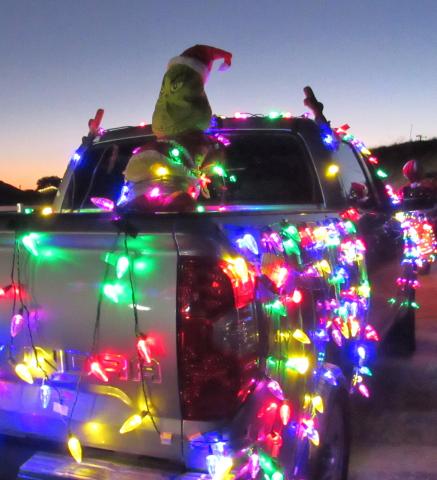 Bianca Machado said everyone loves the Grinch and showed him off with her entry in Dec. 19’s light parade at the Soboba Reservation 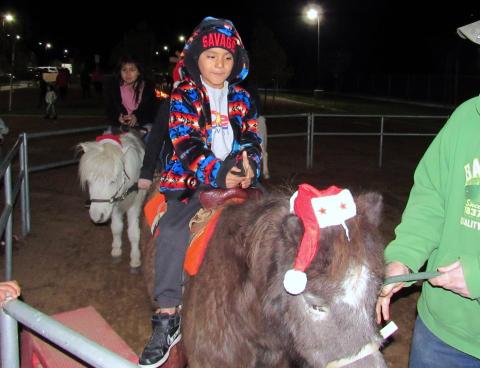 Kids lined up to take miniature horse rides at the second annual Tree Lighting Ceremony and Light Parade hosted by the Soboba Parks and Recreation Department at the sports complex on Dec. 19