The annual event brings communities together ◆ By Mike Hiles

This time of year brings thoughts of falling leaves, turkey with all the trimmings and football. That was the idea behind the organization of an annual flag football game for youth held at the Soboba Reservation on Nov. 21. A group of youngsters and adults from local tribes met at The Oaks’ football field to have a good time playing a favorite sport.

“Back in my day the games were at the original softball fields playing on dirt and it wasn't flag; it was tackle,” she said. “It was always Morongo vs Soboba and the game would rotate reservations each year. Then it went to the old guys vs the young guys, all from Soboba.”

Salgado was happy to see the game return last year after a long hiatus. Steve Lopez, who is sports coordinator at the Soboba Parks and Recreation Department arranged the revived Intertribal Turkey Bowl. He was joined by the department’s recreational aide Ricardo Macias on the field as they guided the group through various plays.

“We used a 60-yard field and each team got four tries to make a touchdown before the other team got the ball,” Lopez said. “We didn’t have any hard and fast rules – we were just winging it and having fun.”

Bradley Guachino brought three youth from the Pala Band of Mission Indians Reservation, near Fallbrook, to be part of the yellow flag team.

“This is what I live for – it gets the kids out of the house and doing something in the community. It gets them active,” said Guachino, 29. “I played football growing up but it was all just messing around, nothing serious.”

Other yellow flag team members were Macias, Steve Lopez, Preston Lopez, Geronimo Trujillo and Cory Reed, who had played organized football in school where he was a linebacker. Preston Lopez and Trujillo, both 14, play on their school’s football team at Valley Center High School.

“I just went out there and did my best with a clear head,” said Reed, 20. “I came out here to play ball, have some fun and represent Rincon.”

“I came out to have fun with the youngsters and show them how to play football – how to catch,” said Martin Valdez, who scored three touchdowns and two conversions during the first half of the game.

Kevin Venegas, 9, was the youngest player on the field.

“I usually play tackle football – flag football is easier to do,” he said.

John Valdez said he had been asking Macias, who coaches a flag football league through the Soboba Sports Complex, about playing more games so he was glad to see the game take place.

Many of the players from Soboba said they really enjoyed the opportunity to play some football with their friends and cousins.

At halftime, the score was 54-48 in favor of the yellow team but the final score was 91-86 with the victorious red team taking home bragging rights. The participants seemed to enjoy themselves and even offered some suggestions on how to make it a bigger event in the future.

“What stood out most to me was the fun that the kids were having,” Steve Lopez said. “There was a competitive atmosphere to the game, yet everyone was having fun and not taking it too seriously.” 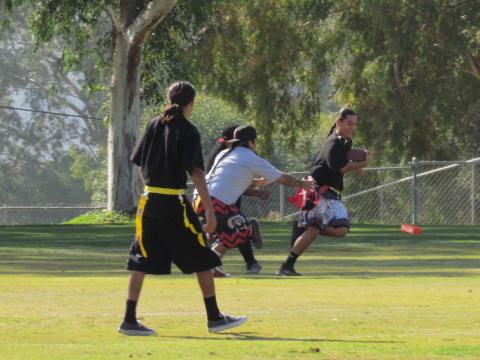 Flag football players have a good time during the Intertribal Turkey Bowl at the Soboba Reservation on Nov. 21 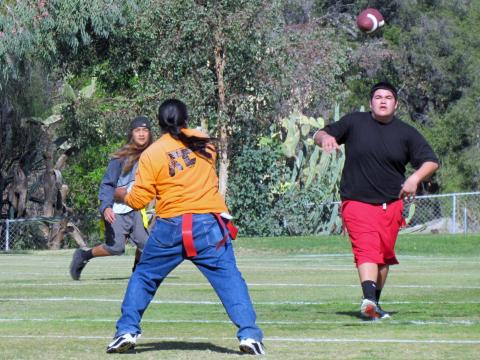 Joshua Lara, right, gets ready to receive a pass thrown by Martin Valdez during Soboba’s Intertribal Turkey Bowl on Nov. 21 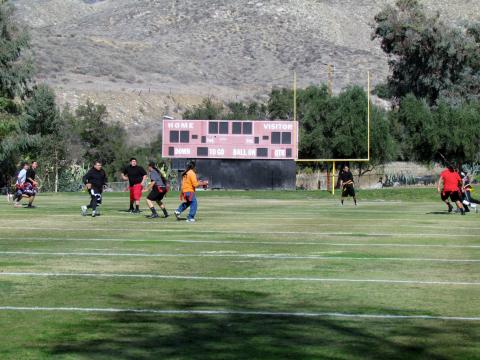 Martin Valdez, center, gets ready to throw a pass during the annual Intertribal Turkey Bowl at the Soboba Reservation on Nov. 21 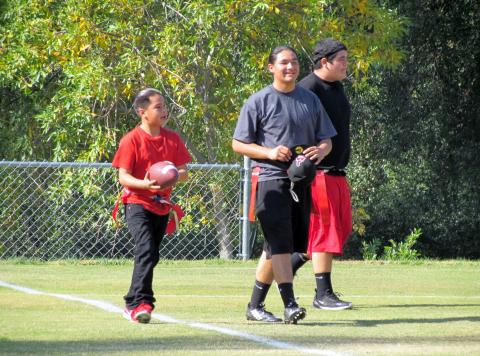 Kevin Venegas, 9, at left with football, was the youngest member of the football players that participated in the annual Intertribal Turkey Bowl at the Soboba Reservation on Nov. 21 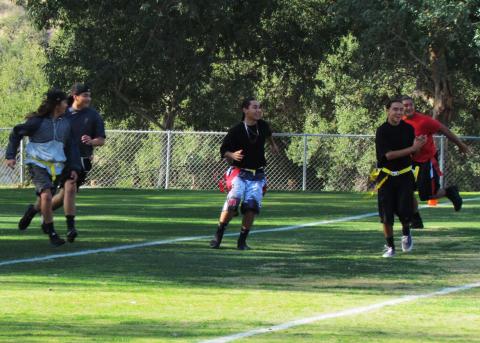 Flag football players have a good time during the Intertribal Turkey Bowl at the Soboba Reservation on Nov. 21

John Valdez, at right, prepares to throw a pass during the Intertribal Turkey Bowl on Nov. 21 at the Soboba Reservation