To provide opportunities for Native American youth, the NFL, USA Football and Los Angeles Rams teamed up to host a Play Football Clinic and Heads Up Football certification program, advancing player and coach development at the Soboba Indian Reservation on April 1.

Johnathan Franklin from the Rams organization, who also helped coach the skills clinics, said it was the first time a youth clinic has been held on a Native American reservation.

"The Los Angeles Rams are pleased to work closely with this community to positively impact their coaches and children through football. Teaching and growing the game in a fun and safe way was our main goal," he said. "We want these youth to live a life fulfilled and not limit their potential."

More than 100 youth from Noli Indian School at the Soboba Reservation, Sherman Indian High School in Riverside, Inter Tribal Sports and local youth leagues such as the Hemet Saints and the San Jacinto Valley Eagles participated in a two-hour skills clinic.

Young athletes rotated through six technique-specific stations, coached by NFL Rams legendary players and others, who provided expert instruction on techniques specific to different positions such as quarterback and running back. On-field skills and drills taught them how to improve shoulder tackling, throwing, receiving, speed and agility.

Antonia Briones watched as three of her sons and a nephew made their way through the rotation. Her oldest boys, who range in age from 8 to 13, have been playing with the San Jacinto Valley Eagles league for years and her youngest, Samuel, is ready to begin his first season.

After a pizza lunch, players were invited to an NFL Legends meet and greet and character development panel discussion about the five core football values: commitment, courage, discipline, honor and respect.

"They spoke about the power of being more than an athlete and exposed the youth to growth opportunities beyond just playing on the field, such as, understanding team work, building confidence, overcoming adversity and being an individual of high character," Franklin said.

Rams alumni David Hill, Lucious Smith, Reggie Doss, Robert Delpino and Ron Brown (who is also an Olympic gold medalist) spent time on the field with the players and Hall of Famer Mike Haynes, who played for the New England Patriots and Los Angeles Raiders, interacted with fans before and during the organized talks.

"Good cut," "good read," "great speed" and "great catch" were common encouragements heard across the football field at The Oaks stadium as professional players put the youth through various drills.

Kyle Eversgerd, with the Rams organization, led the quarterback station.

"We want to give everyone the experience to play the game," he said. "More than anything, the opportunity to play football is a great thing to be part of; it's the ultimate team sport."

Tracy Ball's nine-year-old daughter, Sasha, plays quarterback for a league in Los Angeles and she was happy they were invited to the event.

"She said she really loved it," Ball said. Noli's academic counselor and head football coach Clyde Miller served as organizer, event recruiter and participant as he joined about 10 other coaches in a Heads Up Football and player safety clinic certification through USA Football.

"I really enjoyed their scaffolding approach to coaching," Miller said. "They bring a new philosophy to coaching today's game. It is safety first and USA Football and the NFL have a great way of showing why that's so important during the coaching clinic."

He liked learning USA Football's take on tackling, including new terms to be used at the start of learning the game so when players reach high school and college levels it will already be instilled in their vocabulary.

"Coach Rick Jackson from Madison High School in San Diego coordinated our session and did a great job; meeting him and working with him in the field was by far the highlight for me," Miller said. "He's won a few CIF Championships and 11 conference titles, which is something I'd love to be able to say about myself and Noli one day."

Steve Wyche, an analyst from NFL Network in Los Angeles that was filming the day's activities, said the Play Football events are designed to encourage young people and parents to learn about all the opportunities available within the NFL.

"There's a lot more to the NFL than watching guys play on the field," he said. "We are bringing in former players to talk about character and hard work to open up their thought processes. As someone who does TV, I know it's not just what you see in front of the camera. There are millions of opportunities out there and there is no reason you can't be part of it."

Wyche explained why he thought it was important to offer this football event for Native American youth.

"We feel this is a group that has not been included in terms of outreach opportunities," he said.

Miller believes the Play Football event will get players excited for the season and those that attended will be a little further ahead when it starts.

"I think it's important for the game to be taught in a fun and positive way that USA Football and the NFL accomplished this weekend while also promoting a safer game that can still be played at the most physical of levels," he said. "Many of these youth have never met a professional athlete much less been able to ask questions and run around with them. It's not always the game wins and losses that stay with these young men and women – it's the process and experiences like this."

The Play Football Clinic is funded by the NFL Foundation, which supports the development of football at the youth level. The nonprofit organization is dedicated to improving the lives of those touched by the game of football.

Nick Ferguson tosses a football to San Jacinto’s Keith Hunter, 13, during an NFL Play Football skills clinic at the Soboba Reservation on April 1 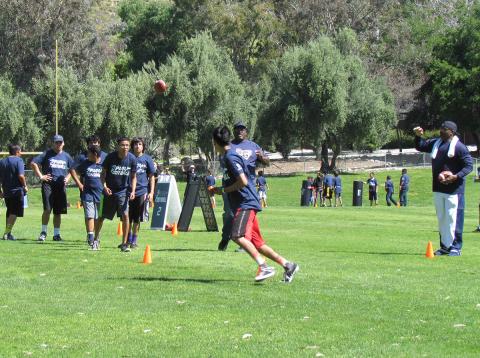 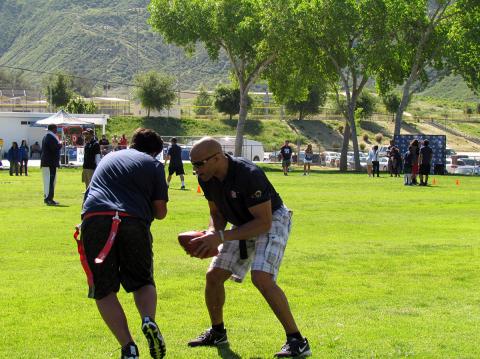 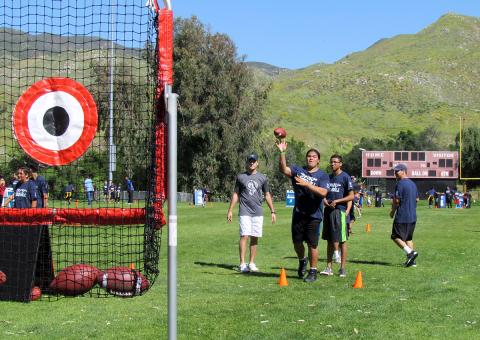 Edwin Muro, 13, works on agility and footwork during an NFL Play Football skills drill at Soboba on Saturday 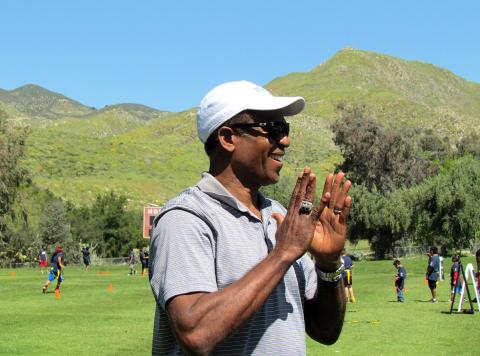