Serving grades six through 12, the Noli Indian School at the Soboba Reservation recently held two ceremonies to promote students. One, on June 1, was for 15 eighth graders who will enter high school next school year and the other, on June 2, saw 13 seniors receive their high school diplomas.

The high schoolers’ ceremony allowed up to three cars per proud family to park and celebrate as their students took these milestone steps. Post welcomed those who gathered outside their vehicle and some who stayed inside, saying he was thankful everyone could come together for this momentous occasion. He said it has been a difficult year and a half for everyone and seeing the students and their families on a regular basis was what was missed most of all.

“Congratulations Class of 2021. It’s great we all get to be out here semi-together in one place to take pictures and be with the ones we love,” Mojado said.

Before turning the microphone over to the two outstanding student speakers, Post said he was proud to announce that this was the first Noli Indian School graduating class that has five students who have completed the AVID program and have been accepted to top-notch four-year universities. Advancement Via Individual Determination (AVID) is an in-school academic support program whose purpose is to prepare students for college eligibility and success.

“This is the class that has been in the AVID program for a minimum of four years and has succeeded the most, strived the most and done the most for the school and we are so proud of them,” he said.

Salutatorian Shania House, a member of the Navajo Nation, thanked staff and her friends and family for helping her achieve her goal of attending college.

“It is with great honor that I announce I will be attending the University of California, Irvine to pursue a degree in psychological science,” House said during her speech. “I plan to become a District Attorney then a federal judge. Without attending Noli, I don’t think I would be on this path to achieve higher education.”

She said her teachers believed in her and constantly reminded her that she was meant for something bigger and better.

“They taught me that hard works pays off and I’m standing up here today, so they were right,” House said. “For all the times I wanted to give up, I say thank you to every one of you that encouraged me and reminded me of my goals. And to the class of 2021: never stop believing in yourself, never stop working towards your dreams; you guys can do anything you put your mind to.”

Valedictorian Vanessa Fernandez spoke next, congratulating her fellow graduates. Also a member of the Navajo Nation, Fernandez announced her acceptance to the University of California, Berkeley where she will major in American Indian Studies and Fire Science.

“Going away to college is a climatic turning point in my life, and it’s been a while since I’ve last encountered something so intimidating, but I will use this opportunity of higher education to advance myself with integrity and dignity, as I continue to honor my Indigenous heritage,” she said. “Noli has been paramount to my academic success and has brought me to this point in my educational journey. The people here and their support of the students is something sentimental and gave off genuine fostering.”

Diplomas were then presented to each high school graduate by members of the Noli School Board. Along with the expected applause, cheers and popping of streamers, car horns honked after each name was announced. As the students accepted their diplomas, a short introduction was read for each one that included some of their accomplishments and their future plans.

Post then said, “Madam Vice Chairwoman, as principal, I do hereby certify that each and every one of these students has met all requirements set forth by the state of California and the Bureau of Indian Education and recommend them to be graduates of Noli Indian School.”

Mojado replied, “As Vice Chairwoman of the Soboba Band of Lusieño Indians, I hereby accept these students as graduates of Noli Indian School, class of 2021.”
Post instructed graduates to move their tassels to the other side of their caps to signify they have officially completed high school. “Return of the Mack” by Mark Morrison, chosen as this year’s class song, was played as family members shared hugs, photos and gifts. 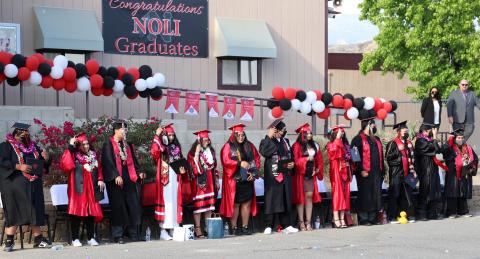 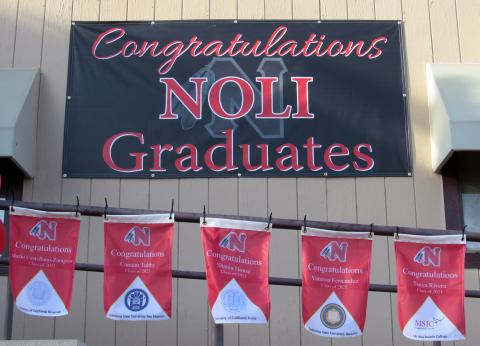 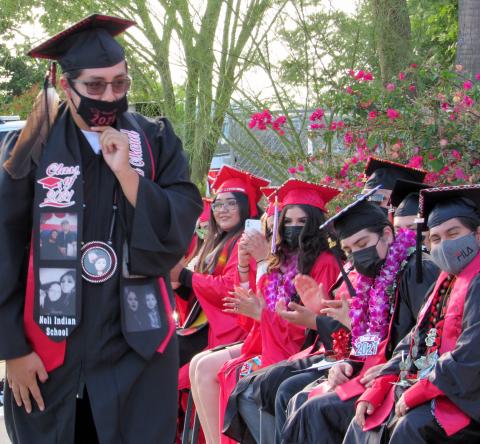 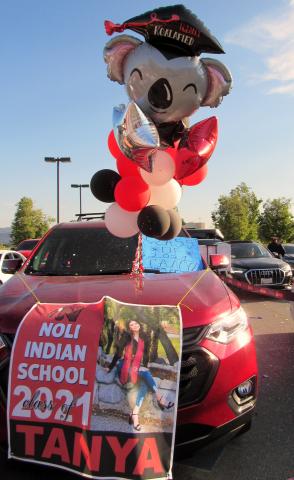 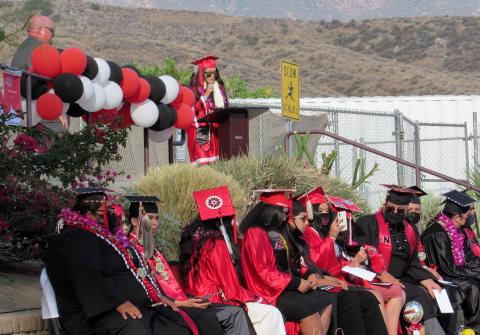 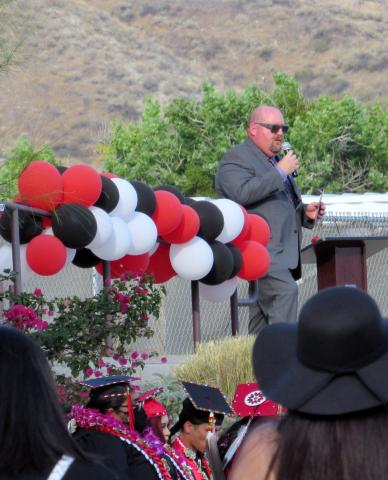