The Noli Indian School on the Soboba Band of Luiseño Indians Reservation has several sports teams but its newest evolved from an after-school running club. Kendra Buck, who teaches Culture and History to middle school students, was able to find a way to share her passion of running with others once in-person learning resumed at the school that serves grades 6-12.

“For me personally, running is cultural,” Buck, who is Navajo, said. “It gets kids moving and it’s one of those sports that almost anyone can be a part of.”

To take the club to the next level of becoming the Noli Track and Field Team, Buck had to seek approval from Noli Principal Donovan Post and Athletic Director Jonathon Ruiz.

“Once they gave us the green light, I had to obtain a Track and Field Coaching Certification to affirm my credentials as a coach,” Buck said.

The next step was to contact Woodcrest Christian School Coach Eric Reynolds to secure a spot at their first track meet, which was on April 19. The team received their track jerseys right before their first competition. Two more meets are scheduled for May 10 and May 17.

Current team members are in sixth and seventh grade, but the meets are open to all middle school ages and grades 6-8 with separate boys’ and girls’ competitions. They were preparing for the 100m, 200m, 400m, 800m, 1600m and shotput events.

“This year we are getting our feet wet,” Buck said. “If I have enough interest and approval from the school, I would gladly run a cross-country program. My personal favorite is long-distance running.”

Buck recently ran in the Los Angeles Marathon, her fourth. While she has clocked five hours in the past, her time for the March 20 race was an impressive 6 hours and 34 minutes.

“I ran my first two marathons in 2015 and 2017 as a charity runner for two Los Angeles nonprofits, American Indian Community Council and Backonmyfeet LA, in order to raise funds,” she explained. “Using this idea, I applied the same logic and opened an online campaign and posted to my social media accounts (to raise funds for the school’s running program). With the support of @native_women_running and @NTVgainz reposting our fundraiser, we were able to raise 114% of our goal within 24 hours. To date we have received $1,170 in donations.”

Each track meet costs $75, and the Noli team was able to make payments on all meets using some of the fundraising money. This year’s campaign is closed, but donations still can be made by check to Noli Indian School with a memo of Noli Track and Field.

Most of the students are involved with other sports but join the sessions, held three times a week, when they are available. The co-ed trainings include warmups, speed drills and running laps.

The runners meet at the Soboba Sports Complex which is adjacent to Noli Indian School. It is the site where the school holds all its physical education classes, so the students are familiar with the paths to take when running.

Buck, of Pomona, explained to the young athletes that every time they do a drill, they are gaining information and data that will help them improve. She said all exercises they do will help with their overall performances.

Maricela Sosa joined the club for the running. She tried softball and didn’t really like it.

Nevaeh Ochoa has been in the club since it began because she wanted to do something after school. She is active in softball, basketball and volleyball.

“I like running on its own, not as part of a different sport,” she said. “You just have to work on your motion and different ways to position yourself so you can go faster.”

Buck said running can help with endurance and physicality for other sports and encourages all students to participate. She was on her high school’s wrestling team and mostly ran for conditioning.

“My interest for running grew after college; I wanted a new physical challenge to support my personal fitness goals,” she said.

Adam Lopez used to run when he attended school in Oklahoma and likes it. Christopher Lagunas said he joined the club to try something new. Now that the club is an official track team, he wants to stick with it.

“I think I’ve gotten a little faster and I like the fun I get out of it,” Christopher said.

Kolókolomay Temanxwanvish said a highlight of being in the club was getting new road running shoes and being treated to healthy snacks at each session.

Buck was able to purchase shoes for the team with funds received from her family, friends, Native Women Running and other kind people she did not even know.

She said she wanted to provide shoes that would be versatile and because the track team competitions are held on dirt tracks, they didn’t need shoes with spikes.

“It makes such a difference when you have the right shoe compared to an everyday shoe,” Buck said.

Other students who regularly participate are Anthony Pimentel, Alonna Rocha and Jonathan Resvaloso.

“As long as kids are moving, they’re winning,” Buck said. “Running has a long history in Navajo culture; it is part of a womanhood ceremony. It’s an important part of who we are.”

She said looking at physical health, Native Americans have the highest rate of morbidity in preventable health issues compared to other American groups and this led to her motivation to start this program for her students.

“The data is out there, and it has not changed, but I’m a firm believer that the 7th Generation, our children and their children, will have a healthier future,” Buck said. “Whether it is a club or a team, my main goal is to promote health and wellness in our native communities. These activities help us achieve balance in our lives as well as culturally connect us to the tradition of running for medicine.” 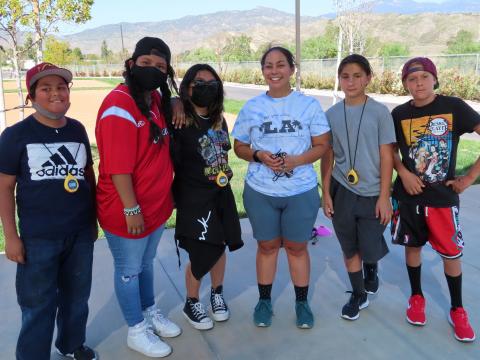 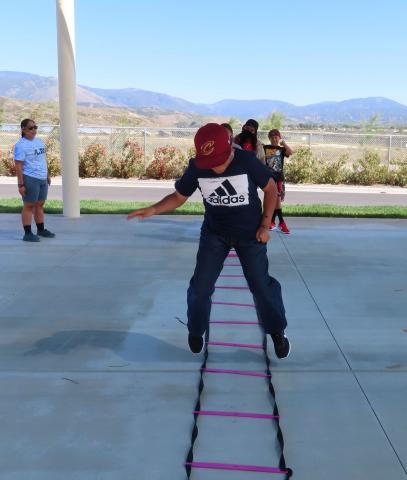 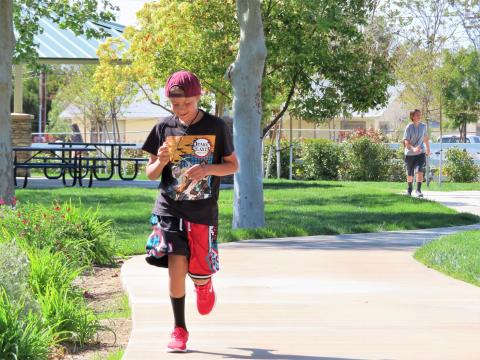 Kolókolomay Temanxwanvish checks his time as he completes a lap around the Sports Complex baseball field during a recent practice. Adam Lopez is ready to round the last curve 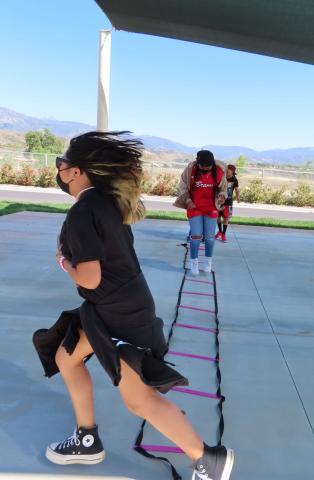 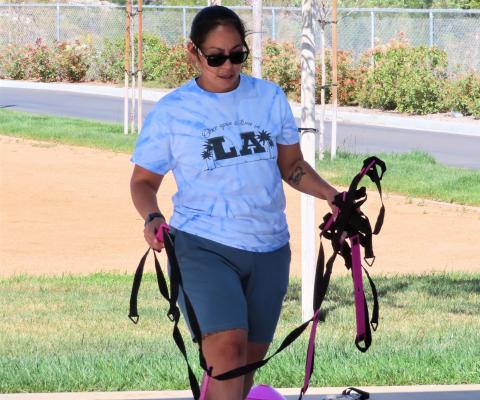 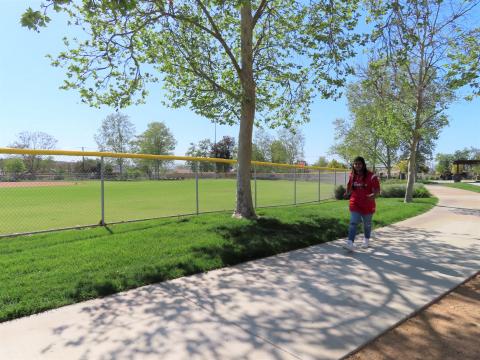