When Dayshawn Townsend became employed by Soboba Casino Resort in San Jacinto he did not know that it would lead to his fulfillment of a decades-long goal he had for himself. As a teenager, living in Massachusetts and Rhode Island, he got off track and ended up dropping out of high school.

He became a father at the age of 16 and felt an obligation to go to work. Finishing school was not an immediate priority for him and he figured he would eventually have an opportunity to return and get his diploma. That did not happen until he started working at Soboba a few months ago.

“This company put me first – and that’s never happened to me before,” Townsend, 51, said. After working in the healthcare field as a Certified Nursing Assistant (CNA), among other service-industry jobs for the past 25 years, he said working at the casino has been more than he could have hoped for.

A few of his colleagues attended his drive-through graduation ceremony at the Hemet Adult School on July 17. The following day, a surprise congratulatory graduation party was held at SCR, prior to the start of his shift for that day.

Several members of SCR’s Marketing Department, led by Chief Marketing Officer Martin Moore, lined the hallway where Townsend entered for work that evening. The applause and well-wishes filled the air as he was given a symbolic cap and gown to wear during the party. He was presented with a medallion from his supervisor, Player Services Manager Priscilla Frank.

“She’s the best boss ever,” Townsend said. “Finding a place like this to work at has been a long time coming for me. It’s the first place where I feel like I’m coming to a home when I come to work.”

When Townsend applied for the position of Player Services Ambassador in March, he did not meet the education requirement of a high school diploma or equivalent, but he impressed staff with his honesty and extensive experience working with people. An offer was made to hire him with the condition he completed his education within one year of his hire date. He did it in three months.

Human Resources Director Gloria Baron said several team members have been hired under conditional employment, especially during the pandemic when it was difficult for some to complete all the requirements right away. At the party, she presented Townsend with a Soboba goodie bag that included a $100 Amazon gift card and a complimentary dinner for two to Canyons, the resort’s fine dining steakhouse.

Townsend, a Hemet resident for the past 10 years, works with fellow Ambassador Ryan Clauson, of Wildomar, who has been on the job for nine months. Formerly, Clauson worked in retail and said he wanted to try something new. He attended the party on his day off to show support for his friend. A third Ambassador has been hired and is starting soon.

“I love it here – it’s a really good place to work,” Clauson said. “Everyone is so friendly, and Priscilla is the best boss ever.”

The position has existed since the casino opened in the spring of 2019 and was created when a need emerged for someone who could assist guests that have questions about being a Players Club member. Working on the gaming floor, the ambassador’s job is to communicate with all guests and ensure all their questions are answered and needs are being met. When special events resume, they will help with contacting members to let them know if and when they are entitled to special discounts.

“We welcome all different personalities for this position; we just need someone who is personable, outgoing and not afraid to approach people,” Frank said. “When I interviewed Dayshawn, I felt his sincerity. He was very humble, and he was dressed to impress.”

Townsend has completed many certificate and licensing programs during his employment in several fields such as social services and working at an adult residential facility for developmentally disabled clients. He is also licensed to work as an armed security officer.

“I love being around people and I think Priscilla saw that in me,” he said. “I applied at Soboba because I wanted to be closer to home and I told my wife it would be nice to go to work, punch in, clock out and come home. I’m never told ‘you can’t leave’ like I was at some of my other jobs.”

With the nature of the jobs he held in the past, there was always the possibility he would need to work an extra shift to cover for someone who didn’t show or have to stay longer to complete paperwork or something else that began during his regular shift.

“Before I came here, no one could understand me as a person – I was just a body, muscle to do the job,” Townsend said. “I wanted to do something different. I wanted to work for someone that understands my needs and wants. When I give 110%, it’s nice to be noticed for doing it.”

He said, “One hand washes the other, but one hand rewards the other, too. I want to tell everyone to go to Soboba because they’ll make it possible for you to reach your goals, as long as you are willing to do your part. You have got to put in the work, but they give you the tools to do the job and succeed in your regular life, too.”

Townsend said he was “young and dumb” while growing up and even though his parents did the best they could, he did not want to follow the routine set for him and his two older sisters. He married young and had three daughters with his first wife. He worked hard to provide for his family but eventually the couple separated.

“Regardless of my struggles, it was important for me to learn how to be a better man,” he said. He met his second wife, Kimberly, and they recently celebrated six years of marriage. He said not finishing high school was always in the back of his mind and no employer was ever willing to work with him to get his diploma. Working 12-hour shifts as a CNA, the hours never lined up with his ability to attend night school.

“Soboba told me to sign up for school and that they would make my work schedule according to my school schedule,” Townsend said. “It turns out I didn’t need a schedule because of COVID; everything was being done online, and I didn’t have to wait. I started as soon as I applied for the job.”

He worked on a few credits in the morning and sometimes before going to bed for the night, working at this own pace, and he kept plugging away at each class until his teacher notified him that he only had one class to go.

“I had the choice of getting my GED but I’m not a good test taker; it was better for me to learn something and then take a test on that before moving on and I wanted to get my diploma,” he said.

John Warkentien is Director of Player Development at SCR and he praised Townsend for his job performance from the day he was hired.

“You cast a really big shadow around here; you put out a good shadow for all our employees and guests,” he said at the celebration.

Guest Services Specialist Brenda Anderson has been with SCR for about five years and said she was proud of Townsend for stepping up to meet the contingency of his employment in such a timely manner.

“Soboba let me finish what I started,” he said. “For Priscilla to see that in me without even knowing me really touched me. I love being on the floor. They will get the best out of me because this is what I love to do.”

His job responsibilities include meeting and greeting guests on the casino floor and explaining the benefits associated with the Rewards Club, offering them the opportunity to enroll or register for any promotions or drawings. Ambassadors are expected to always communicate positively and professionally with guests and co-workers. They are also expected to demonstrate a desire to succeed and a willingness to help others succeed. Townsend likes sharing with guests that the Rewards Club is exactly that – Soboba rewards their guests in appreciation of them spending their time at this casino when they have other options.

“I’m willing to share my story with others about what Soboba has done for me and what a great place it is to work,” Townsend said. “I’d love to talk at some of the high schools to reach the kids who are like I used to be so they know there is a place for them where they can make a career for themselves. Soboba is part of their community, and they should know what it can offer them. The community needs to know that Soboba cares, and I’m willing to be their voice – I am living proof.” 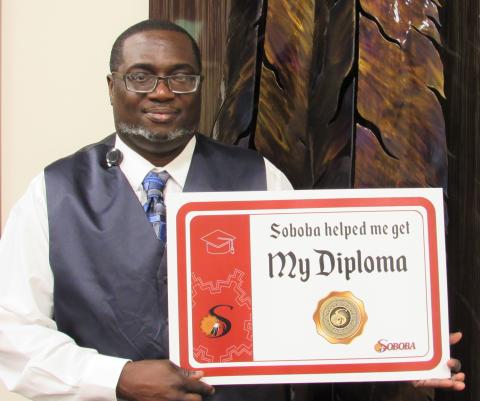 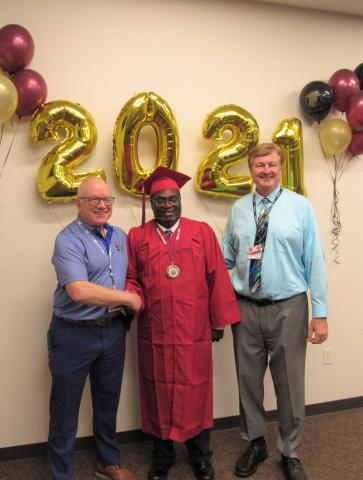 At left, Soboba Casino Resort’s Chief Marketing Officer Martin Moore congratulates employee Dayshawn Townsend, center, as Director of Player Development John Warkentien also joins in the graduation celebration. A video on display, showing Townsend receiving his diploma from Hemet Adult School the day before, also included inspirational quotes such as this one from Eleanor Roosevelt: “The future belongs to those who believe in the beauty of their dreams.” 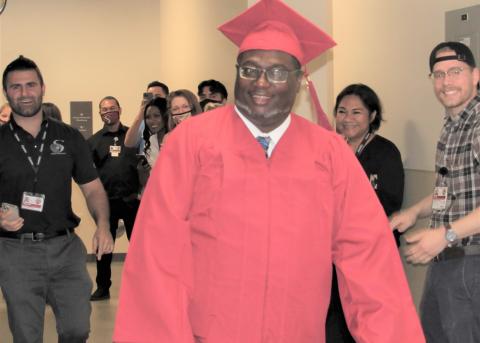 Dayshawn Townsend was given a symbolic cap and gown to wear during a surprise graduation party set up and attended by his colleagues at Soboba Casino Resort, who greeted him with applause when he arrived