Soboba Foundation Gives Back to the Valley

About 300 golfers swarmed The Country Club at Soboba Springs on April 3 and 4 to have fun on the links while helping local nonprofits during the Soboba Foundation & Soboba Casino sixth annual Charity Golf Tournament.

The popular event grows each year, expanding to two days of play this year and providing each of 10 organizations with a $10,000 grant to continue their work, up from seven given out last year. A diverse group was selected to be recipients of this year's tournament, including those who work with and for children, youth sports, students, adults with disabilities, seniors, veterans and Native Americans.

Volunteer coordinator, Dee Cozart, said all the groups were grateful for the opportunity to show their appreciation to Soboba by doing whatever was needed to make the days run smoothly.

"Every charity took it very seriously and were great about pitching in wherever needed," she said. "They all worked together and did everything from soup to nuts. It's all about honoring Soboba and being grateful for the grants that are a lifeline for these charities."

From tee off at 10 a.m. to about 4 p.m. each day, players made their way around the course that offered 10 contest holes with great prizes.

Soboba Tribal Council Vice Chairman, Isaiah Vivanco, has served as Tournament Director the past four years. He said this year 75 foursomes competed compared to last year's 54 teams (and 21 on the first year). The biggest challenge this time was making it a two-day event.

"It was quite an adjustment as it meant doubling everything," he said. "But the vendors and volunteers stepped up and we got it done. It's amazing what you can accomplish with support."

Soboba Tribal Council Secretary Monica Herrera was impressed with the participation of teams from 17 other tribes. There was one team from Canada, one from north of Sacramento and many others from throughout Southern California.

Following their fun on the greens, everyone enjoyed an awards banquet that included raffles with a grand prize package valued at more than $5,000 and a live auction. It also featured the presentation of checks to the nonprofits who spoke of their appreciation to Soboba for helping them continue their important works in the community.

Vivanco is also a member-at-large of the Soboba Foundation. He and his family visited the sites of several of the organizations prior to the tournament.

"I'm usually stuck in an office all the time but I got to go out and see what they do in and for the community – it was very rewarding," he said. "It was awesome to see them in action."

This was the first year that Care-A-Van Transit, whose mission is to "provide transportation with a heart," benefited from the tournament.

"The grant will be used to support the free transportation program provided to seniors, disabled persons, veterans and low-income individuals who do not have access to transportation to meet their basic needs," said Malia Bryant, on behalf of the nonprofit. "Transportation is provided to medical appointments, dialysis centers, banks, grocery stores, senior centers and more."

At last year's event, EXCEED received funds to upgrade the computers at its Hemet facility, that provides "service and advocacy, which creates choices and opportunities, for adults with developmental disabilities to reach their maximum potential." This year they will be making much-needed repairs to their Casa del Valle residential facility which would not be possible without Soboba's help.

"The two air-conditioning units are our greatest concern as many of our clients are negatively affected by temperature extremes because of medical conditions and/or medications," Executive Assistant Sandra Aldridge said. "We really can't thank the Foundation enough for their generosity for this very important project."

A total of 20 helpers from her organization helped over the two-day tournament and Aldridge said the highlight for the group was building a sense of camaraderie and purposefulness among the volunteers.

"We also very much enjoyed meeting the other recipient groups and members of the Soboba Foundation and Tribal Council," Aldridge said. "We had a great time and I love working with the Foundation, especially Andrew Vallejos, and we appreciate all they do in the San Jacinto Valley."

Diane Perez, superintendent of San Jacinto Unified School District, said the two-day tournament was extremely organized with literally hundreds of volunteers supporting, including about 20 from her district who pitched in.

"The highlight for me was greeting and thanking the golfers because their generosity makes the giving in our community possible," she said. "We were pleased to be a small part of giving back to Soboba, who gives so much to SJUSD all year long. Our relationship is one of mutual support and caring. Soboba is committed to improving the lives of our students and our community."

"We are so thankful for the Foundation's support and could not do this project without them," he said.

Vivanco said any funds raised beyond the $100,000 distributed to the 10 local nonprofits will allow the Soboba Foundation to continue to sponsor activities and events throughout the year.

"With the success of this year's tournament, I can't imagine it getting any better but with the new course and resort being built, I'm sure it will be bigger and better next year," Vivanco said. "I've already got some ideas in mind." 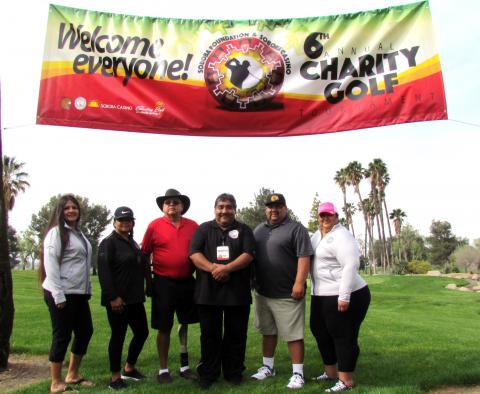 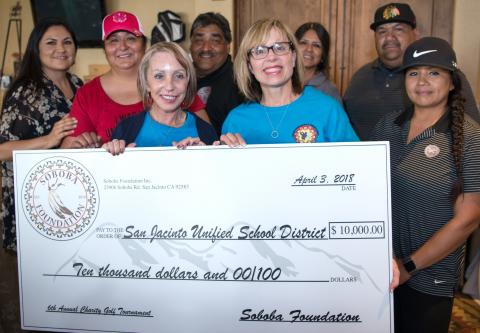 The San Jacinto Unified School District was one of 10 nonprofits that received a $10,000 check from the Soboba Foundation, at its annual charity golf tournament 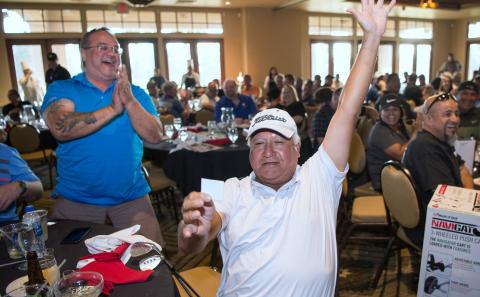 A lucky ticket holder reacts at the banquet, held after the conclusion of a day full of golfing 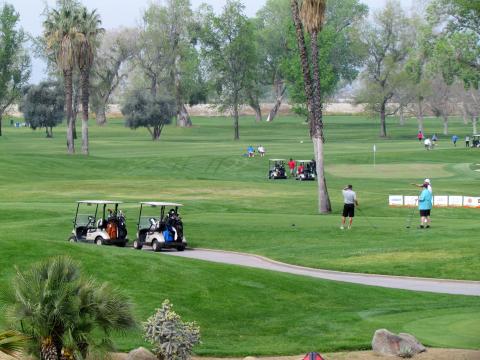