In two different ceremonies, staff at Soboba Band of Luiseño Indians Tribal Preschool congratulated students on completing another school year and moving on to the next level. On June 9, preschoolers got to visit and receive congratulatory high-fives and hugs from teachers and smiles from proud parents who took lots of photos and videos.

June 11 was set aside for an in-person, but socially distanced, promotion ceremony for 21 kindergarten students who completed all the necessary requirements to enter first grade in the upcoming school year. The multi-purpose room was decorated in a combination theme of rainforest sloths and bees. Kindergarten teacher Cindy Lee explained that at the beginning of the school year, due to COVID-19 restrictions allowing distance learning only, the students divided their time between Lee (sloths) and teacher’s aide Antonia Briones-Venegas (bees).

“This year has challenged us as a school, as a community and as families,” guests were told. “We want to thank all of our parents and guardians for embracing the change and working through the many challenges that we have faced. Although it ended differently than a normal school year, we have many memories of the happy times we shared with each other.”

Each graduate was welcomed to the campus with a congratulatory yard sign that had their name and photo. There was a photo booth set up in the hallway and each was given individual attention as they entered the preschool with family members who preceded them into the MPR. The students marched in along a balloon-laden path to the strains of “Pomp and Circumstance” before being greeted by Lee and presented with their diploma. They were then awarded specific certificates for outstanding accomplishments.

Francis Begay, a big fan of Disney’s “The Mandalorian,” received a Perfect Attendance award, only the second time Lee has given that honor to a student in the 13 years she has been at the school. Francis was presented with a special medallion from preschool director Donovan Post.

“He was a star student and earned a Perfect Homework award,” Lee told the audience. “He also gets a Super Reader award as he’s reading at a second-grade level.”

Lee said teachers and staff also considered what each student contributed to the entire class throughout the year and Francis was given an award for “Best all-around student for academics and citizenship.”

Francis, the youngest of seven children, was applauded by about 10 family members and his mom said the past school year had been hard for him because he missed his friends. His dad, Glen, said that when the school day was over, Francis would go back on the computer and re-watch some of the videos because he missed being in class. The six-year-old is headed to Hemet Quest for first grade.

“The school made it as easy as they could and were very flexible, so he was able to adjust to everything,” his mom, Maxine Begay, said. “We worked with him over the summer and prepped him, knowing it would be a virtual setting this year.”

Lee said she had four students who were reading at a first- or second-grade level and about 10 who learned how to read during the school year, which she said was amazing since they had to learn it without in-person teaching in a classroom setting.

“We have some very good parents, that’s for sure,” she said.

Aiden Bentiste, who is also a super reader and had perfect homework completion, was excited to receive some new books from his teachers.

“Distance learning was a process but not too hard; not being able to see his friends was the hardest part,” his dad, Joseph Bentiste, said. “We plan to take him out to eat and spend the whole day with him to celebrate his graduation.”

$uwo$wush Resvaloso, 6, earned a Perfect Homework award and Super Attendance for missing less than 10 days of class “no matter where he was connecting from.” Because of his love for math and Legos, he also was given the STEM Award for his interest in all things that revolved around science, technology, engineering and math. Lee said although he is more of a visual, hands-on learner, he did very well throughout the school year.

“He’s definitely grown a lot,” his dad, Gabriel Salinas, said. “The lack of socialization was definitely the hardest part because he missed his peers. But we just went with the flow online; at first it was a little difficult but then he buckled down and got the hang of it.”

Clementine Swan received an award for being the “Most Enthusiastic” student and when asked how she felt about the ceremony she said, “Happy!” with a big smile. She also earned a Perfect Homework award.

“It was a lot of work getting them up every day, getting them ready and keeping them on task,” her mom, Carrie Garcia, whose other daughter Clover was in the preschool class at the same time. The busy mom also has a younger son, Cygnus.

Each student received a bucket of crafts and games, a packet of projects they had completed from their daily homework packets, a huge balloon arrangement and cupcakes.

And students weren’t the only ones that received accolades during the event. Parents, mostly moms, were presented with a certificate of appreciation and a Starbuck’s gift card to thank them a “latte” for “hanging in there and being there for your kindergartner” and helping their child succeed during this unprecedented year. 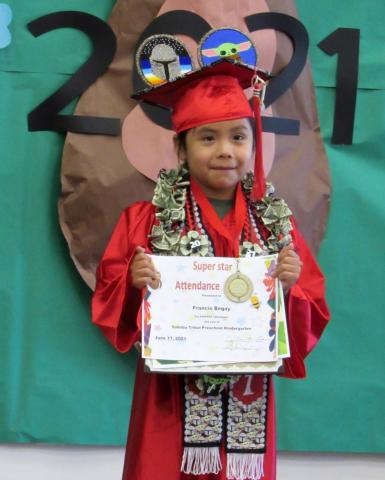 Francis Begay’s interest in Disney’s “The Mandalorian” series was evident in the sash and mortarboard he wore with his kindergarten graduation gown. He was the only student who received a Perfect Attendance award from the Soboba Tribal Preschool 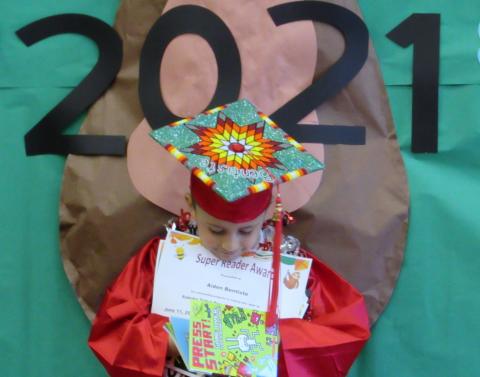 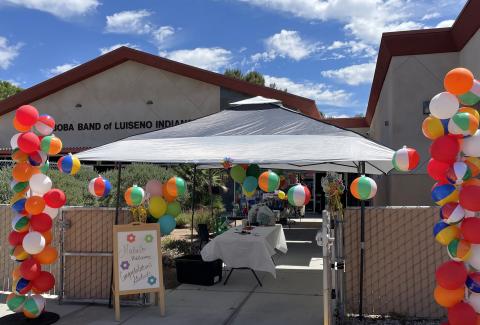 Preschoolers were greeted with balloons, goodies and lots of excitement when they were promoted on June 9 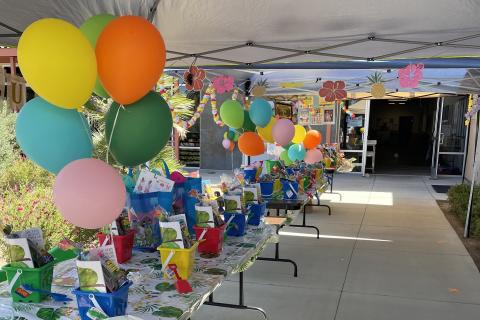 More than 50 Soboba Tribal Preschool students officially promoted to the next level on June 9 when they received their certificates and lots of goodies to keep them busy during the summer. Kindergartners had a separate ceremony on June 11