The national youth conference was well-attended ◆ By Mike Hiles

The message for this year's annual youth UNITY youth conference was "Answering the Call of Our Ancestors" and it drew a record number of attendees who are part of the Soboba Tribal TANF program. Having it held in San Diego was a plus since it was practically in their back yard.

The United National Indian Tribal Youth Inc. (UNITY) is a national nonprofit organization that promotes personal development, citizenship and leadership among American Indian and Alaska Native youth. Established is 1976, UNITY is one of the largest and oldest American Indian youth leadership networks in North America. It has more than 220 affiliated youth councils in 36 states. Youth councils are sponsored by tribes, Alaska Native villages, high schools, colleges and other community organizations.

Keynote speaker Supaman (Christian Takes Gun Parrish, Apsaalooke), is a Native American dancer and innovative hip hop artist who has dedicated his life to empowering and spreading a message of hope and faith through hip hop music.

Matika Wilbur (Swinomish and Tulalip) is one of the nation's leading photographers. Her most recent endeavor, Project 562, has taken her to more than 300 tribal nations throughout 40 states where she has taken thousands of portraits and collected hundreds of contemporary narratives with one goal: to change the way we see Native America. She was also a keynote speaker.

Brooke Simpson (Haliwa-Saponi) is a powerhouse vocalist who is passionate about songwriting and people. Appearing on the NBC reality show, The Voice, she finished third on the show's 13th season. She was a keynote speaker and also gave a standout performance.

Pre-gala entertainment was provided by singer Levi Platero (Navajo) and professional magician Brian Yazzie (Navajo), who is a member of the International Brotherhood of Magicians and showcases a unique style of magic.

"Harold Arres was co-chair of the local planning committee which meant we got to plan all the cultural activities for the conference and we had several local bird singing groups attend," Tucker said.

"I attended the workshop about lacrosse and I learned about the brothers and how their life was," he said.

Willis White, also from the Santa Rosa Band of Cahuilla Indians, attended the conference for the first time and enjoyed all the workshops he attended. His favorite was learning about the Fancy Dance and how to do it and he plans to share what he learned with family and friends.

"I also learned about the trust circle and how to trust other people," he said.

Soboba Band of Luiseño Indians tribal member and president of the Soboba Youth Council, Asona Arres, liked meeting other Native American youth. She has attended several UNITY conferences in the past but liked the fact this one was local so they didn't have to fly. She and her sisters, Abigail and Hattie, took part in the Native Challenge workshop about building trust in a relationship.

"I learned that you need to put your trust in the right people," Asona said.

Hattie, who has attended past conferences, agreed that the best workshop was the one that included the trust circle workshop teaching the youth how to trust others through team building activities.

"What I have told my sisters about UNITY is how it helped me be more social and talk in front of crowds," Hattie said. "I really liked the talent show because everyone got to show their own personality through their talent."

This was Abigail's first UNITY conference and she said she learned about the importance of paying attention to lessons.

"The event allows the kids to network with youth from around the country, hear from Native leaders and participate in cultural activities," Tucker said. "They gain skills they can apply in their communities and life to be successful."

Tucker said everyone agrees that the youth that have the opportunity to experience the conference return motivated to be more active in their communities, do well in school and succeed in life. 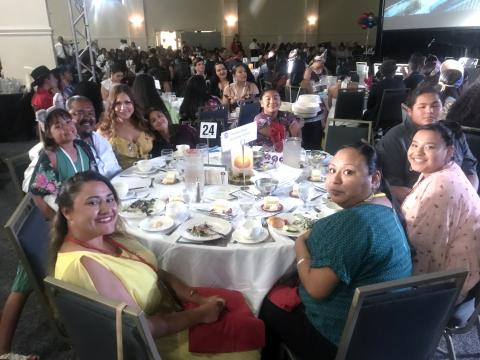