The second Soboba Weight Loss Challenge is already shaping up to be more successful - and competitive - than the first one that was held from September to November. On Jan. 8, 25 participants checked in for a chance to win prize money in the following categories: total weight lost, total body fat percentage lost and/or total mass muscle percent gained.

The eight-week "New Year, New Me" challenge will end on March 8, with winners being announced at the Soboba Sports Complex Community Health Fair.

"This is a way to have fun and help promote living a healthy lifestyle," said Ricardo Macias, a recreational aide for the Soboba Parks and Recreation Department for more than a year, who is overseeing the events. In addition to special programs like these, Macias provides other community events that coincide with health, wellness and leadership. He also coaches youth basketball, softball and flag football.

"I feel health is a major issue within our tribal communities and if I can spark the change with at least a couple of people within our community, I'm hoping they can do the same for others as well," said Macias, from the Cahuilla Band of Indians.

Several incentives are being offered during the two-month challenge including healthy snack options, such as pitaya (smoothie) bowls topped with bananas, strawberries, blueberries, granola and chia seeds available at the sports complex between 10 a.m. and 2 p.m. during the month of January for $5 each.

There is also a twice-weekly boot camp through March 1 in conjunction with the challenge, although it's open to all tribal members and tribal employees trying to get into shape, or maintain their current condition. The one-hour workouts are hosted by personal trainer, Daniel Mazza.

He puts the participants through a series of exercises that will improve upper and lower body strength as well as the core.

"In the same class, we have all ages - from 14 or 15 to 55-plus so I modify the workout, if necessary," said Mazza, who is a Cahuilla tribal member but lives on the Soboba Reservation.

"Conditioning, diet and nutrition has to be part of anyone's exercise plan," he said. "We do a lot of strength and resistance training. There are many different benefits to what we do. Strength training helps with bone density. Working out in general will change your metabolism. We are just trying to get them moving and promote a healthy lifestyle."

Boot camp instructor Mazza said he offers something different with each class to keep it interesting. He has been a personal trainer for about eight years but says he's always been into training and weightlifting.

Alyssa Reina concentrates on lifting weights as her main form of exercise, which is why she was in the complex's weight room during boot camp. She signed up for the challenge in hopes of building her muscle mass.

"I've been lifting weights for about six years and I keep a journal of the weights I lift so I can see my progress," said Reina, 26.

As he puts the participants through different short but intense exercises, Mazza is also their biggest cheerleader encouraging them with every lift, hold and sit-up.

"The main focus is to boost metabolism for life," he said. "I'm not here to kill them; I'm just trying to get them back in shape. It helps when you have a group working together - that's what I like about these boot camps."

Sisters Tekla and Mica Diaz are competitive in many ways and took part in the first challenge, with Tekla placing first with two percent muscle gain and a loss of three percent body fat.

Tekla has been a competitive Fancy Shawl dancer for about 17 years and she also teaches the traditional Native American dance to tribal members during classes at the Soboba Band of Luiseño Indians Reservation's multipurpose center, the Santa Rosa Band of Cahuilla Indians Reservation, near Mountain Center and Sherman Indian High School in Riverside.

She said it's been easy to stay on track because her whole family started taking their health very seriously about six years ago so everyone is mostly vegan. When not dancing or at boot camp workouts, Tekla works out with a group of ladies that includes her mom, sisters, cousins, friends and anyone else who wants to join in.

"We are always changing it up - weight lifting, hiking, running and cycling," she said. "It makes working out so much easier when your family and friends are always there asking about the kind of workout we should do. We are all out here with one goal: to motivate ourselves and each other. I can't stress enough that health is wealth."

She also stresses the importance of staying healthy to her students, who performed at about eight different events in 2017.

"Dancing takes so much out of you; staying active and fueling your body with good foods is a must," said Tekla, 28.

Mica is a professional motocross racer who has been competing in the sport for many years. She has taken a year off from the sport but plans to do some desert racing this summer. She also goes mountain biking and road cycling on a regular basis but said building core, upper and lower body strength is key to being able to be a successful rider.

"I just like being on two wheels but I also enjoy running in the Soboba hills," she said. The first challenge really inspired her to join this one because she did not win but hopes to win one of the categories this time.

"It definitely motivates me to work harder in the gym and to take my diet more seriously when I have a goal, rather than just working out regularly as I usually do," said Mica, 26. "I normally don't compete against my sister but she did beat me in the last challenge so yes, she is definitely one of my main competitors because she works hard in the gym."

She agrees with Mazza that eating right is paramount to maintaining good health.

"Diet accounts for 80 percent of my progress," Mica said. "I have been following a vegan diet for more than four years. The only restricts I have are meat, dairy and eggs. With that, I'm left with vegetables, nuts, grains and fruit. For this challenge, the hardest part for me is avoiding all the vegan junk food!" 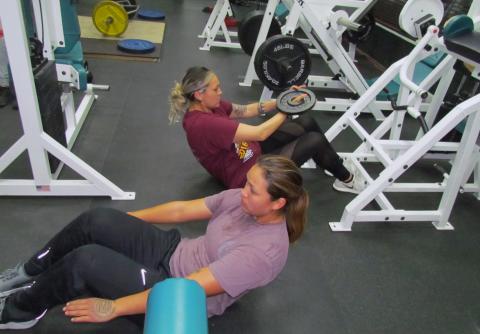 Mica Diaz, bottom and her sister Tekla Diaz are among the 25 participants in the most current Soboba Weight Loss Challenge 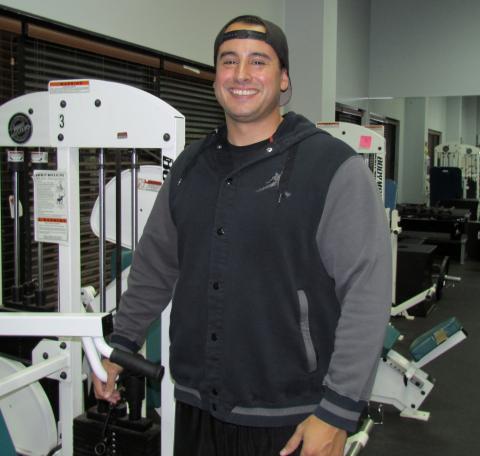 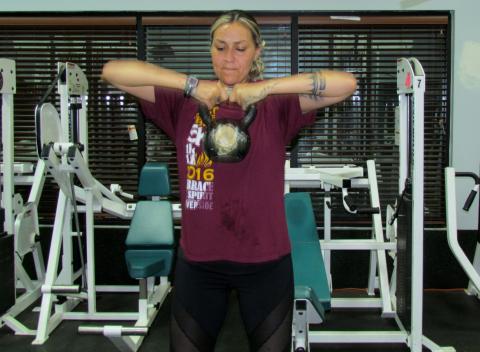 Tekla Diaz lifts a 30-pound kettlebell several times during one of the series of exercises that were given at a recent boot camp, being taught by personal trainer Daniel Mazza, at the Soboba Sports Complex 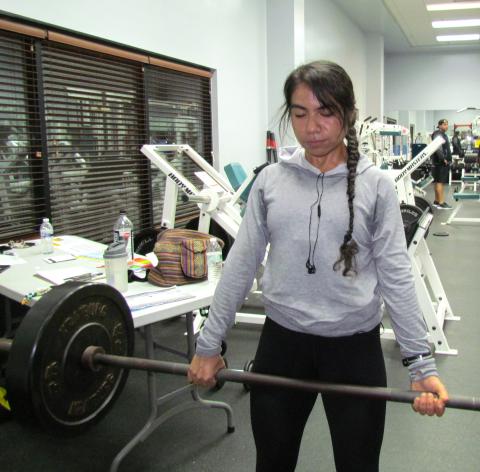