The Soboba Cultural Department Native/Community Garden was started in 2016 with the intention of growing pumpkins that could be harvested before Halloween and shared with the community.

The current and more extensive garden was established in 2018 after Tribal Council approved the cost for a fence to keep large animals from feasting on the plants. The Cultural Department’s plan is to have the garden used for a variety of interpretive programs. The department’s Tribal Land Resource Management (TLRM) Crew is an essential part of the garden’s care and operation.

At just a little over half an acre, about two-thirds of the space is being used for the Practical Garden and about a third has been reserved for the Native Garden.

“The inclusion of the Native plant garden is done through a cooperative effort with Soboba Environmental that began in 2018,” said Joseph Ontiveros, Tribal Historic Preservation Officer at Soboba’s Cultural Resource Department.

“This garden is targeted to showcase traditional plants that can be harvested and utilized in medicines, food and other items,” he said. “More importantly, this garden teaches the importance of preserving natural resources that can be used in a sustainable way.”

“In the workshops, the attendees have the opportunity to learn the uses of practical plants as well as sample some edible and medicinal plants,” he said.

Certified UCCE Master Gardener Thurman Howard got involved with the project last year and visits at least once a week. He said the aromatic plants such as healthy sage, willow and mesquite being grown in the Native garden help deter many insects from the food plants.

“The crew has learned a great deal about agriculture in a very short period. They have learned how to identify predators and disease, water properly, and care for plants in general,” Howard said. “Most importantly, they have developed a sense of pride in being able to grow and produce food. This is what motivates volunteers like myself to help with this project.”

“The soil in the garden lacks nitrogen; therefore, we have been working with Burrtec to bring green compost in to build up the soil. This will be an ongoing effort until the nitrogen levels improve,”

Howard said. “Additionally, the irrigation system and the control of watering has been an issue. With that said, we asked Scott Brendt of Riverside Unified School District to help install a more efficient irrigation system that will also reduce how much water is being used. The system has been assessed, parts have been ordered, and plans to complete it are in the works. Thanks to supporters like Scott, we were able to create over 10,000 feet of tape irrigation at a very low cost.”

The most recent tender food crops being harvested are button squash and zucchini with other fall crops maturing. Liz Stephenson, Cultural Programs Facilitator for the Cultural Resource Department, is excited about the prospects of using the garden as a teaching tool as well as the ability to share its abundance with the community.

“This is our first real harvest and it’s so exciting for the crew to see the fruits of their labor,” she said.

TLRM crew member Eloyd Rodriguez said growing and sharing vegetables was the thing to do when he was little.

“My grandma raised me, and we always had a basket of vegetables by the door and we’d trade baskets with our neighbors – sharing the ones we grew and vice versa,” he said.

Rodriguez said working on the garden for the past couple of months has been a fun learning experience. He has learned about natural ways to deter pests and critters and how to improve the soil to make it more fertile. The crew stops at the garden every morning on their way to the canyons.

“I feel really blessed to be part of this – I’m usually the first one here and the last one to leave,” he said.

Howard hopes this is a great starting point for others to learn from the current crew and to motivate others to start their own backyard gardens.

“This is a good way to teach children where food comes from and to hopefully reach back to the land and once again touch nature,” he said. “I am looking forward to seeing the participants be able to grow their food and their plants for ceremonial activities. I want to see them take pride in what they grow.” 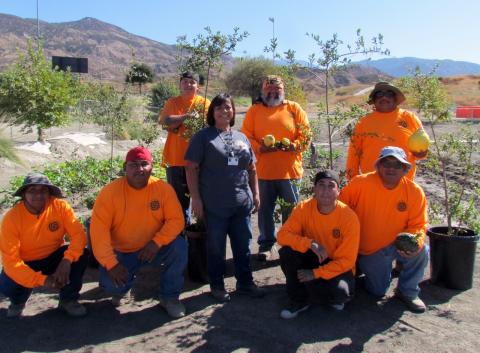 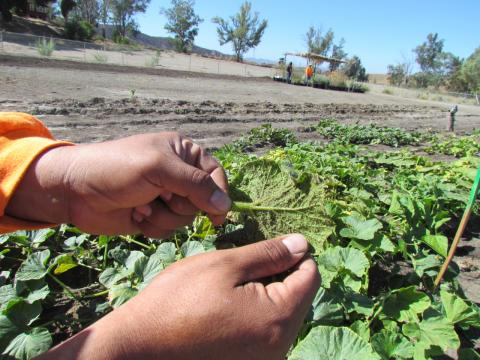 TLRM crew member Eloyd Rodriguez shows the underside of a leaf explaining the importance of regularly cleaning all leaves to prevent deterioration. 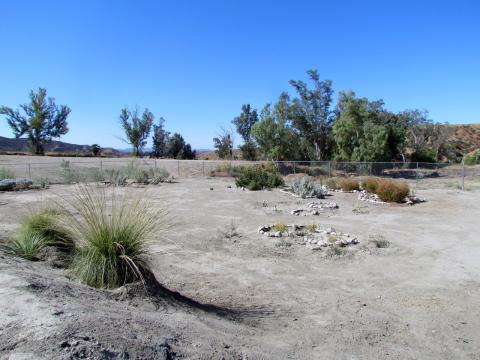 About one-third of the garden is dedicated to the growth of Native plants such as sage, willow and mesquite. 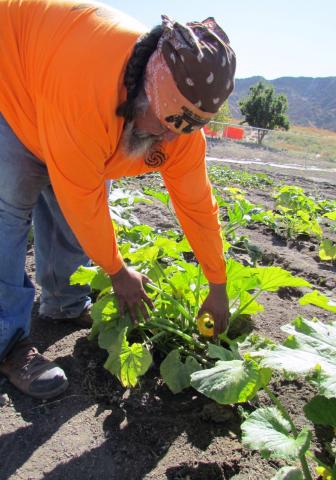 Eloyd Rodriguez shows one of the button squashes that is growing in the Soboba Cultural Department Native/Community Garden. Almost daily, the crew harvests several items that have reached maturity. 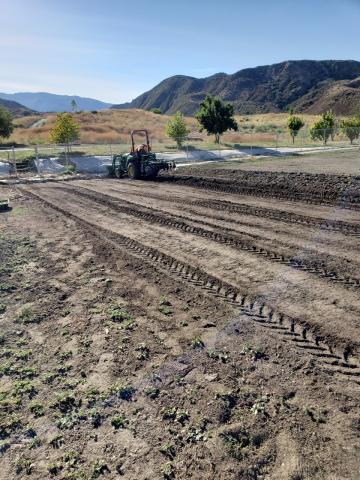 (Photo courtesy of Thurman Howard) The first steps in developing the current Soboba Cultural Department Native/Community Garden began in August, when the land was tilled.