Soboba Gets into the Swim

In an effort to offer San Jacinto High School students a way to participate in a competitive aquatics program, a pool was constructed on its campus and the public got its first look during a ribbon cutting ceremony on August 30. The Soboba

Aquatics Center is more than a 25-yard by 38-meter swimming pool, although that is what elicited oohs and ahhs from the enthusiastic crowd that gathered for the event.

“We believe excellence comes through equity and access and having our district open its first pool is a way of signaling to everyone that our kids deserve what every other student deserves,” San Jacinto Unified School District Superintendent Diane Perez said. “I’m overcome with emotion and overcome with the support of this community that stepped up. And no one did more than the Soboba Band of Luiseño Indians to make today possible.”

Salgado, a former school board member, presented a proclamation to San Jacinto Unified on behalf of the tribe congratulating them on the new facility. She said it has been a long time coming for the school to get a swimming pool and she was proud that the Soboba Band of Luiseño Indians was able to be instrumental in making it happen.

The tribe and the district have a strong and supportive relationship and many tribal members have graduated from San Jacinto High. They recalled the days when swim classes and meets had to be held at the Sallee Park community pool and students had to walk the half mile distance in order to swim.

The ribbon cutting ceremony included lots of fanfare with the Tiger Marching Band and cheerleaders performing for the crowd. A First Jump Fundraiser for the San Jacinto Education Foundation was added to the festivities.

In the days leading up to the event, donors could vote on one of five people they would like to see be the first one in: SJUSD School Board President John Norman, Superintendent Diane Perez, San Jacinto High School’s principal Courtney Hall, ASB Director Antoinette Miles or Coach Aric Galliano.

The total amount raised for the nonprofit organization was $1,557 with Norman and Perez tied in votes to take the first plunge in tandem.

The Soboba Aquatics Center will provide new opportunities for students to connect, develop new skills and stay physically fit. The pool will allow for competition in various water sports as part of the Mountain Pass League. There is also the possibility of opening the pool for public use on non-school days in the future.

“We’d really like to share this with the community,” SJUSD school board president John Norman said. Photos Courtesy of the Soboba Band of Luiseño Indians 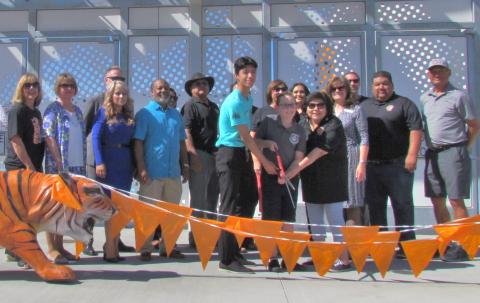 A ribbon cutting ceremony for the Soboba Aquatics Center was held on Aug. 30 at San Jacinto High School 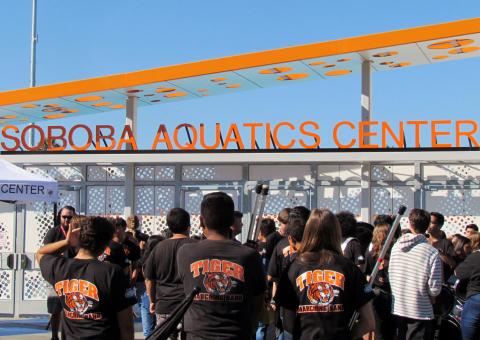 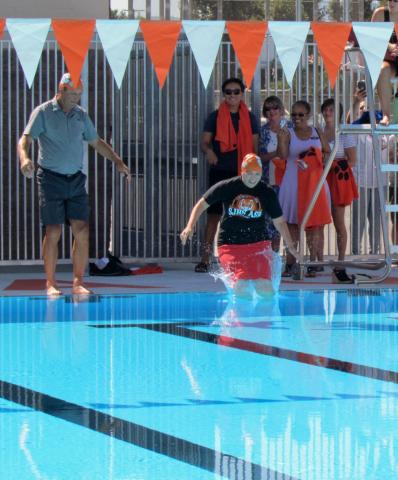 John Norman, standing and Diane Perez, in the pool, tied for votes to be winners of the First Jump Fundraiser held in conjunction with the ribbon cutting for the new Soboba Aquatics Center at San Jacinto High School on Aug. 30