In preparation for a Memorial Day ceremony at the Soboba Cemetery, members of the Soboba Youth Council and Soboba Tribal TANF joined with employees of Soboba Parks and Recreation and Soboba Fire Department to place flags at the graves of veterans buried there.

It was also a clean-up effort on May 24 after recent storms overturned vases and left debris on the grounds of the cemetery that is located behind St. Joseph’s Catholic Church on Soboba Road.

Jennifer Garcia, who works as the Activities Director for parks and recreation, is also an advisor to the youth council members.

“This is my first year doing this,” said Soboba Youth Council President Iyana Briones, 14. “I think it’s important to do this for our veterans.”

She carried some of the flags that were placed at the gravesites of veterans under the direction of Steve Lopez, Sports Director for Soboba Parks and Recreation, who had a map showing where each was located within the cemetery.

The Veteran’s Memorial located at the north end of the cemetery is “dedicated to the memory of the Soboba Band of Luiseño Indians and non-tribal members who gave their all for us.” See below for a list of names engraved on the wall. It was washed down by Andrew Salgado, 12, and Arthur Lopez, a Recreation Aide who also placed flagholders in front of the monument that represented four branches of United States military service: Air Force, Army, Marine Corps and Navy.

At dawn on May 27, members of the Soboba Fire Department quickly raised three flags to full-staff position and then slowly lowered them to half-staff where they remained from sunrise until the 11 a.m. ceremony that honored fallen servicemen and women. An American flag and flags of the state of California and the sovereign nation of the Soboba Band of Luiseño Indians were hoisted up the 25-foot tall flagpoles that stand tall behind the stone and granite Veteran’s Memorial.

About 50 people assembled around the Veteran’s Memorial where Father Earl Henley offered prayers for the veterans and had everyone join in the singing of “America (My Country, ‘Tis of Thee).”

At the conclusion of the ceremony, which followed a mass at St. Joseph’s, the flags were again raised to full staff in recognition of all the living military veterans who served the country. The flags remained flying until sunset.

“My grandfather (Albert J. Silvas) served in World War I,” said Mary Margaret Masiel, of Valle Vista. Her mom, Barbara Guanche said they have a lot of relatives at Soboba.

“It’s nice that they do this to honor our veterans after all that they did for us,” Guanche said.

Several guests, such as Alice Helms and her nieces, shared stories about relatives that served in the military and were remembered on this special day. Helms’ sister served in the WACS (Women’s Army Corps).

“I think it’s important that they do this to honor our veterans,” Helms said.

Marian Chacon said before the youth took over cleaning the cemetery and placing flags at the graves of veterans, she and her family and friends volunteered to do it. About three years ago she attended a Soboba Youth Council meeting and suggested they take over the task.

“When they agreed, that was great for me,” she said.

Garcia said the group is all about giving back to the community and this was a great opportunity. About 10 members helped with the cleanup and returned for the ceremony and hosting of the breakfast.

“These are all new members and I’m so proud of them for stepping up – I really appreciate them,” Garcia said.

In memory and honor of those who served: 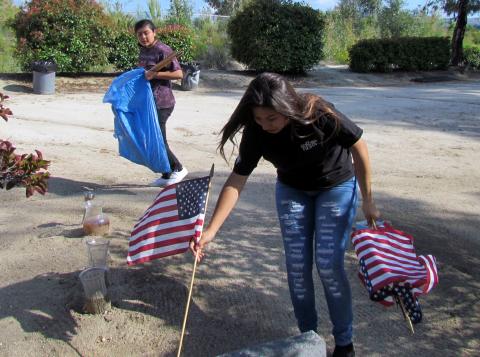 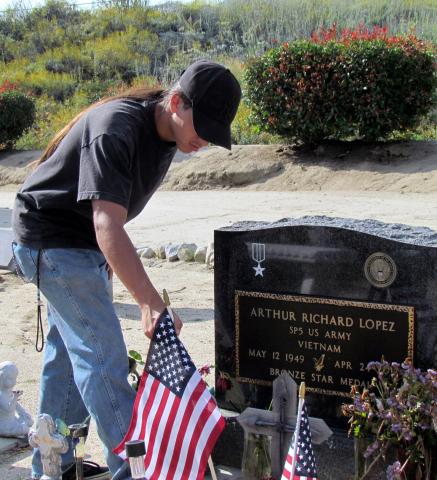 Arthur Lopez places a flag at the Soboba Cemetery grave of his grandfather, a Vietnam War veteran 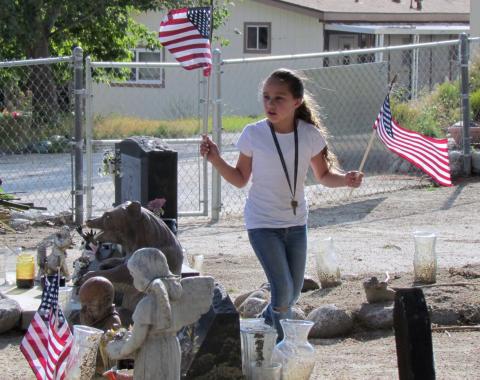 Noyáaykit Silvas, 7, helps her dad and others place flags at the gravesites of veterans buried at Soboba Cemetery in preparation of a Memorial Day ceremony 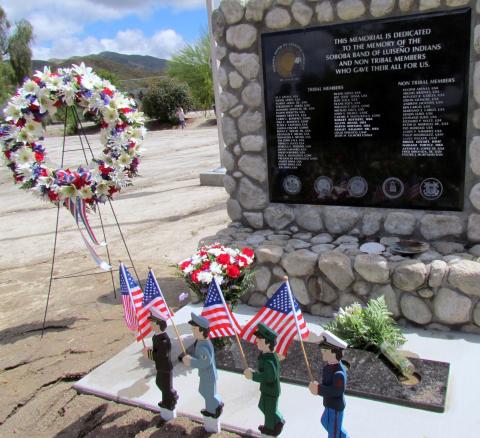 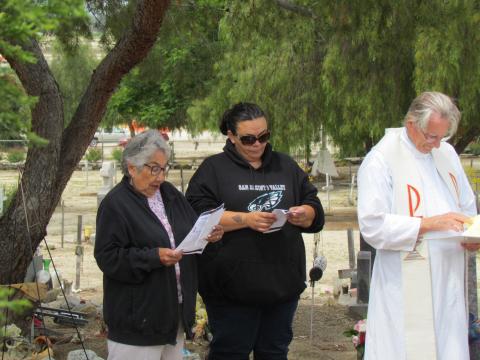 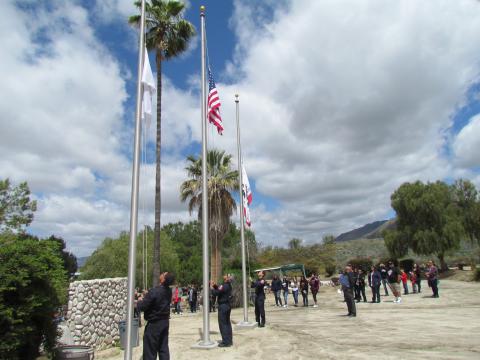 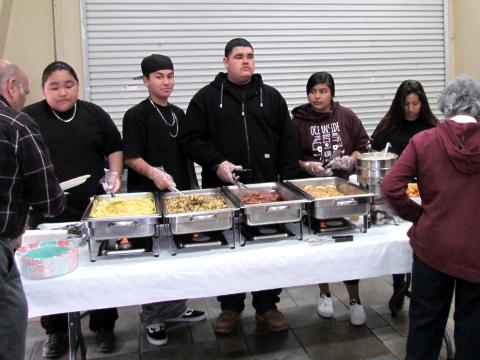 Members of Soboba Youth Council assisted before, during and after the Memorial Day recognition program on May 27. Serving breakfast at the Sports Complex were, from left, John Briones, Jeremiah Ramos, Josh Lara, Iyana Briones and Ciara Ramos