Young athletes who are members of the Inter Tribal Sports golf program arrived at the Soboba Springs Golf Course on Saturday for a round of fun. More than 100 players from 7-18 were divided into foursomes to enjoy an afternoon of golf under sunny skies.

Team Soboba’s head coach Ricardo Macias said about 20 players who attended practices consistently since the season started on April 3 were expected to play during the sessions that began with the first tee off at 1 p.m. and concluded at 7 p.m.

Players were divided into age groups with those 12-18 playing nine holes, 8-11 years old playing six holes and the youngest at 5-7 years old, playing three holes. Two players from each team were paired with another team to create a foursome. Assistant coaches Mike Durrett, Steve Lopez and Andy Silvas joined Soboba Team players on the course as they teed off during staggered times at various holes.

“This sport has been really popular with the 5 to 11 age group,” Macias said. “Most were new to the sport but a couple of them go out golfing with their parents and are familiar with the sport.”

He said there were two practice sessions held each week, based on age groups, and players were taken to the driving range and played a few of the holes.

Siblings Ciara Ramos, 15, and Jeremiah Ramos, 17, never played golf before but were enjoying learning the game.

“It’s fun,” Ciara said. “I like trying something I’ve never done before. I also like coming out after the quarantine and enjoying the day out here.”

Inter Tribal Sports offered its inaugural season of golf as a way to continue serving youth during the pandemic that prevented its traditional sports, such as flag football, to be offered during this time of the year. ITS Executive Director Isaiah Thompson said golf is a great sport that allows individual competition and the ability for participants to keep a safe distance while competing.

After offering golf clinics at local ranges, players have been given the opportunity to play at locations such as Soboba Springs Golf Course to give them a real experience at playing a game.

“All the courses offer a variety of things that improve golfing skills, such as strength,” Thompson said. “This was made possible thanks to all the tribes.”

Tyson Magginni, head coach for Team La Jolla, said he had a dozen players on the course with all but one or two that were brand new to the sport. He added that it’s been a good opportunity to get the kids away from television and off their couches. His team members were given Fitbits to track how many steps they put in while walking the course.

“They’re having fun, and this is a great course; it’s beautiful out here with all the trees,” he said. “It’s cool to see the kids grow into the sport. I tell them that in this game, all it takes is one good shot.”

ITS Site Supervisor Coralynn Bradley was busy checking in players, doing COVID screenings, answering questions and referring players and their families to the ITS Help Desk for tee off times and locations.

“It’s been great working with all the different tribes for this season,” she said. “All the tribes have been really supportive.”

Team Soboba player Gage Almanza, 17, said this was his first time on the Soboba Springs Golf Course but that he was enjoying the game he was learning and hopes to keep it up after the season ends.

Fara Lopez signed her daughter up for Team Soboba because after all these months of online school, she wanted to see her get outdoors and participate in some sports.

Nataane Lopez, 7, said she likes when she swings the club and the ball goes “really far.” In the past she has stayed active by playing basketball, softball and soccer.

The championship games will be held on May 15 at Pechanga’s Temecula Creek Inn golf course.

Inter Tribal Sports combines athletics with wellness and cultural programs for Native youth in Southern California, to unify tribal youth and communities. The Temecula-based nonprofit will be hosting its 11th ITS Golf Tournament Fundraiser on June 11 at Journey at Pechanga. Information can be found online at www.intertribalsports.org or by phone at 951-719-3444. 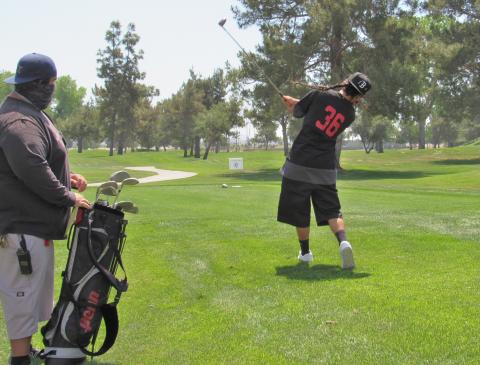 Inter Tribal Sports’ golf program spent the day at Soboba Springs Golf Course on April 17. At the first hole, Kali Valenzuela strategizes her shot while Soboba teammate Nataane Lopez, right, looks on. They were playing in the 5-7 age category 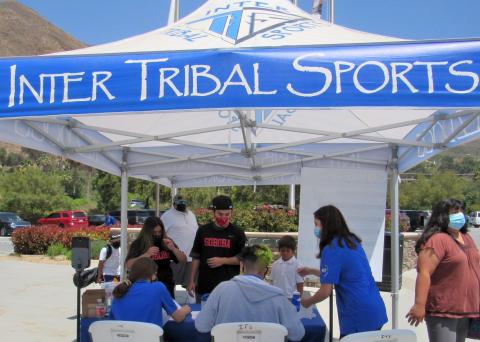 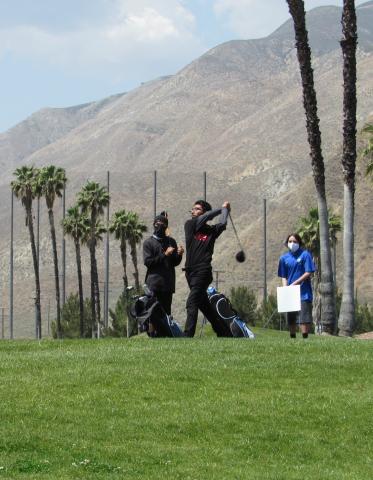 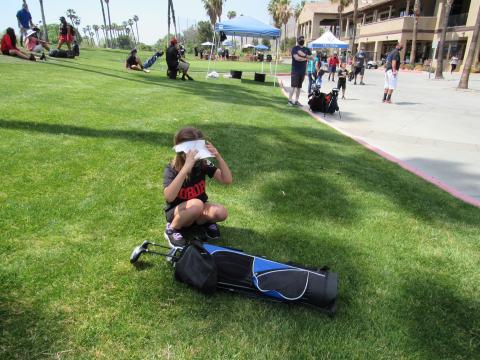 Nataane Lopez, 7, adjusts her visor before heading to the first hole to tee off at Soboba Springs Golf Course. A member of Team Soboba, she was one of about 20 youth who have been participating in the golf season for Inter Tribal Sports 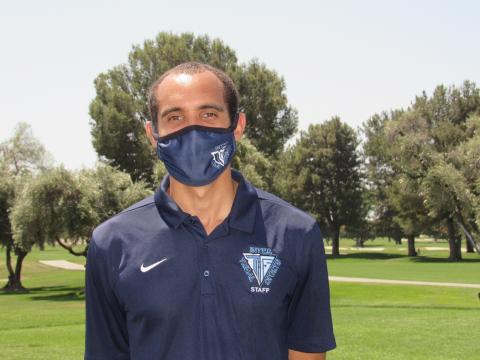