The Soboba Band of Luiseño Indians hosted the National Indian Athletic Association fastpitch softball tournament in 1998, 1999 and continuously since 2007. This year’s event drew 15 men’s 13 women’s teams to the Soboba Sports Complex and The Oaks baseball diamonds throughout the weekend of Sept. 16-18.

The tournament traditionally draws players from throughout California, other states and even Canada to compete during three days of bracket play. Nearly 20 members of the N.I.A.A. Committee worked tirelessly to organize the games. Many volunteers stepped up to the plate to assist with making it a seamless event, from start to finish.

The opening ceremony on Sept. 16 included a welcome by Geneva Mojado who wore many hats throughout the games. She serves as Soboba Tribal Council Vice Chairwoman, headed this year’s N.I.A.A. Committee and gave it her all on the field as a member of the Soboba Women’s team, who placed second in 2021 and again this year.

“This is our biggest N.I.A.A. Tournament thus far,” she said. “Welcome to our homeland, welcome to Soboba. We are at about 8,000 acres here, we have over 1,500 Tribal members with about 900 of them being adults and we love softball.”

On behalf of the Tribe, she thanked everyone for coming to Soboba to enjoy the N.I.A.A. tournament once again, stating that it would not be possible to host without the generosity of all the sponsors and volunteers.

Each year, honorariums are presented to those who have been instrumental in playing a significant role in the softball community. Those recognized for 2022 were the late Yoli McCarter and Irene “Grams” Martinez, who passed away in 2020. Mojado said the N.I.A.A. Committee chose two of its biggest softball fans this year, both who helped out so many teams, local and far away, by opening their homes and hearts to players.

Randy’s A’s men’s team consisted of many players from Canada, including Gage Martin. His late father, Randy Martin, moved to California to live with his aunt and uncle in Corona to pursue a baseball dream. He met Yoli, who became a huge part of his life. Over the years, she supported all players and considered them part of her family regardless of the uniform they wore. Randy’s A’s dedicated the tournament to Yoli, who is missed by members of the BC Arrows, Randy’s A’s and all the teams their ball families have represented.

Gage Martin, 17, playing in his first tournament at Soboba, is an outfielder and first baseman. He was chosen to throw out the ceremonial first pitch in memory of his father Randy and Yoli to officially start the men’s games.

Irene “Grams” Martinez (Placencia) was recognized for her unwavering support of the N.I.A.A. tournament for many years. She was an avid sponsor of the tournament and a huge softball fan. Her favorite team, Bryan’s Blackhawks, wore jerseys that honored her by having her name on its uniforms’ sleeves. The sport took her all over the United States to watch her family members and extended softball family play in Native and non-Native tournaments. The N.I.A.A. Committee took pride in honoring her for her dedication and sponsorship of the tournament and the sport in general and will greatly miss her.

Throwing out the ceremonial first pitch on behalf of Grams to mark the official beginning of the women’s games was Gary Placencia. Bryan’s Blackhawks members are from California, Oklahoma and Nevada who join together for certain tournaments. Frank Gonzales grew up on the Soboba Indian Reservation and lives in Murrieta now. George Woods has been on the team for 10 to 15 years and gave the opening blessing at the opening ceremony. Both men recall Grams supporting the team since they were little kids.

Like many other teams, Bryan’s Blackhawks is intergenerational. Gonzales’ brother and nephew play on the team as well as Woods’ nephew.

“I like fastpitch because it’s quicker and I grew up playing it,” Gonzales said. “I started playing on the men’s team here (at Soboba) when I was about 11. It was only sand where these baseball fields are now.”

Soboba Parks and Recreation Director Andy Silvas, who is also on the N.I.A.A. Committee, has played on the Beernuts team since 1995 but this is the first year they have had enough Native players to be in the N.I.A.A. tournament. As pitcher, his team won its first game on Friday evening.

“I like that it is an all-Native event and that we get to see some great Native talent from all over,” Silvas said. “The level of play and players is very good.”

N.I.A.A. Committee member and outstanding photographer Rhonda Valenzuella posted the following remarks on social media at the close of the tournament, along with hundreds of photos.

“On behalf of the N.I.A.A. Fastpitch Softball Committee, I’d like to thank every single one of you who made it out here this year. I know every year is special, but this year just felt different,” she wrote. “The atmosphere was peaceful and yet there was so much energy. It was a beautiful weekend spent with a lot of amazing players, family and supporters. We hope you felt like family during your weekend with us.”

Valenzuella also thanked the families of this year’s honorariums.

“Yoli and Grams were some strong, amazing Native Women! We are all truly lucky to have known them. They’ve touched the lives of so many people,” she said. “They fully supported this sport and had a rare, unconditional love for those who played it. They were definitely a major staple in our tournament here over the years. They are truly missed. Seeing their names on hats and jerseys this weekend was absolutely remarkable. Thank you for sharing these beautiful women with our community. Please stay safe on your journeys home. Thank you for joining us this year, we hope to see you next year.” 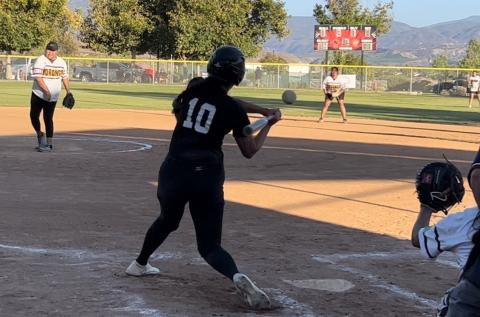 Cary Moon sends a pitch over home plate during tournament play at Soboba. Her Morongo Women’s team finished at the top and she was named MVP Pitcher 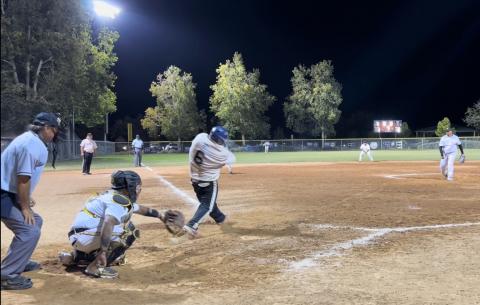 The Pala Braves show strength and skill on the Soboba Sports Complex ballfield as they ended the N.I.A.A. tournament in the top spot 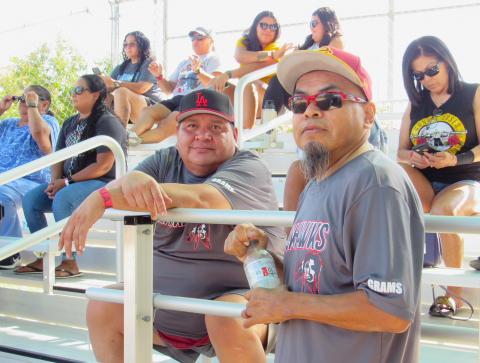 George Woods, seated, and Frank Gonzales, at right, are members of the Bryan’s Blackhawks team who played at the N.I.A.A. tournament in honor of Irene “Grams” Martinez 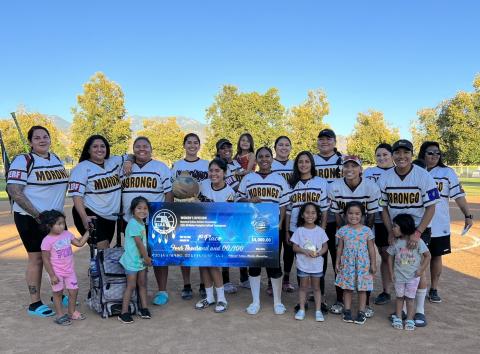 The Morongo Women take home a first-place finish after a weekend of play at the most recent N.I.A.A. Fastpitch Softball Tournament at Soboba 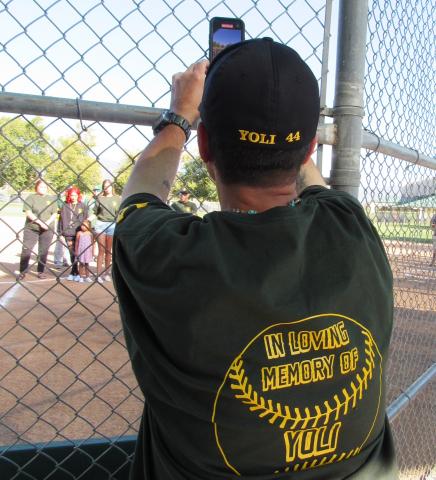 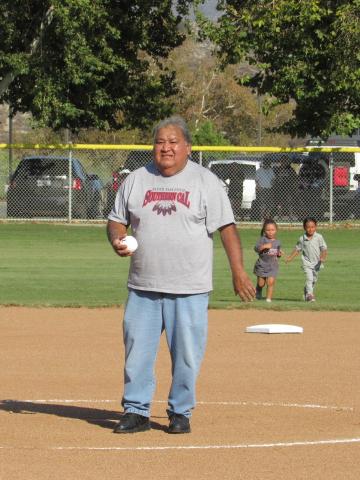 Gary Placencia prepares to throw out a ceremonial first pitch to mark the start of the women’s games at this year’s N.I.A.A. tournament 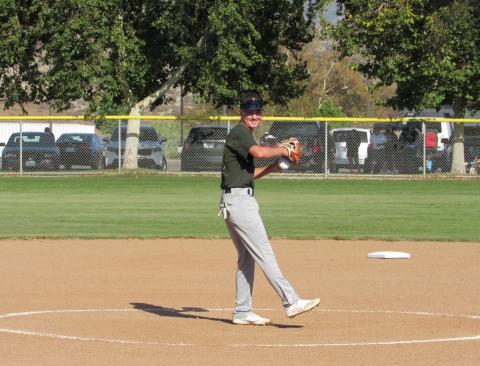 Gage Martin from Canada, representing Randy’s A’s, throws out a ceremonial first pitch signaling the start of the men’s games at the 2022 N.I.A.A. tournament 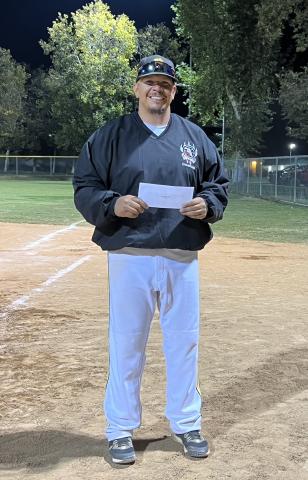 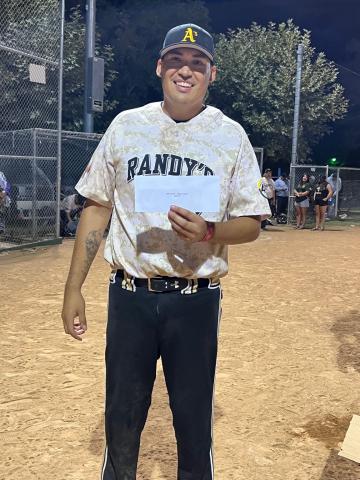 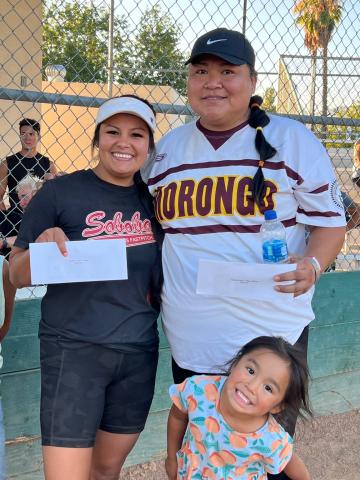