When Ricardo Macias planned his latest Wolves Basketball Camp at the Soboba Sports Complex, he arranged to have the admission price be a new toy that could then be donated to the Soboba Gives Back! Toy Drive. It was a way to show players firsthand the importance of sharing with others. “One thing I want to teach the kids is to give back whenever and however they can,” he said.

Macias is the Lead Recreation Aide for the Soboba Parks & Recreation District and started a basketball travel club about a year ago. After being a coach for more than 10 years, he decided to form his own program. He attracts players from Temecula, Perris, Moreno Valley, Menifee, Hemet, San Jacinto and more. Although most are Native American, it is not a requirement to be on the team.

“I wanted to give kids in the area a good opportunity to play,” he said. “Most of the clubs out there charge sign-up fees, registration fees and other expenses. Not all kids are financially able to afford that and we just want them to be able to play.”

Macias, a member of the Cahuilla Band of Indians, was happy that his tribe stepped up to sponsor jerseys for the Wolves. “We want to make sure the kids feel good about what they’re wearing and look professional,” he said. “They get one green jersey and one black one, so we have an alternate if we need to distinguish ourselves from the other team.”

The most recent camp on Nov. 21, held just before the week-long break most students had from school, attracted about a dozen players of all ages. Macias said the first camp a few months before went very well with about 30 kids attending.

“We’ve been winning our games and we are fully rostered,” he said. “It’s a lot of work because coaching the older players is a whole lot different than coaching the younger ones. The parents are so good at helping me out with everything.”

Macias said they like to play a game every weekend, if possible, but the high-school age players are slowing down a bit because their own school teams are starting up.

The camp started with some free play before introductions. Professional basketball player and Soboba Tribal Member Joseph Burton joined Macias in working with the kids. He is currently coaching at West Valley High School where he played before heading to Oregon State University where he played for the Beavers, followed by eight years playing overseas.

Burton started playing sports when he was 3 or 4 years old: T-ball and outdoor and indoor soccer at Valley-Wide, baseball through Hemet Youth and Tribal baseball. “I was picked as an all-star pitcher and my mom said I had to pick one sport. I just love basketball – we are a basketball family; my dad coached at San Jacinto High School for many years and my mom, uncle and aunt all played sports.”

“It’s easier to teach the older players because they have a good foundation of the game but getting them younger is better because we can start instilling good ways of playing basketball and they tend to listen more than the older ones,” Burton said. “I take away from what my grandpa taught me and what I learned in high school, college and club ball. It’s tough to teach high school pro level because some are not here yet. They really need fundamentals. Social media sort of ruined the game by teaching bad habits and just tricks.”

As camp director, Macias explained the expectations for the day and led the players in stretches, cardio and agility warmups. The participants were then broken down into groups and rotated through exercises and drills for shooting, passing, dribbling, footwork, agility, defense, rebounding, screening and moving without the ball.

Sean Preston, 11, of San Jacinto started with the team in August. His mom, Monisha Cruz, said it has been great for the kids to have this type of opportunity. She said before the pandemic, Sean played basketball through Valley-Wide Recreation and Park District. “He loves basketball,” she said. “He has been playing sports since the age of four and this seems to be his niche.”

Jonathon Patton, 14, of Hemet has been playing on the Wolves team since it began and continues to learn a lot. Julian Ojeda, 15, of San Jacinto played for Inter Tribal Sports and is now part of the Wolves.

Anna Rameshwar brought a few girls from Pala Indian Reservation to San Jacinto. She has been a volunteer coach for more than a decade and played basketball in college. She thought it would be fun for her daughter, Amira, and her friends, all 12 years old, to attend the camp. They even donated extra toys for the toy drive.

“It’s nice to have an all-girls team on the reservation; it’s a safe environment for them to learn, to blossom and grow in one little town like Fallbrook,” Rameshwar said.

Arnel Jimenez, of Hemet, loves working with the kids and having such a positive outlet for them to keep active and for them to learn the fundamentals of the game. His son, Kaleb Jimenez, 11, likes all sports. Arnel helps the team with communication between players and parents and coaches the 15-year-old players. “The little ones still listen, and the older ones think they know it all but overall they are all good kids,” he said.

“We try to make this the best program we can,” Macias said. “Winning is great but I want the players to learn what we can take from losses. These games are the stepping stones to understanding ups and downs in any situation. In one game we lost by three points and a player missed a shot at the end of the buzzer. But we had missed 10 free throws and turned over the ball so many times. We lost because it was a sloppy game so that’s what they are beginning to understand. The entire game isn’t dependent on just one play, it’s what the team does throughout the game.”

Juan Martinez, 16, from the Torres Martinez Desert Cahuilla Indians Reservation but now living in Perris, has been on the Wolves team since it began and said it’s been good for him. He said he came to the camp to improve his overall game. “I learned some dribbling drills today that will help me stay low at all times,” he said.

Bobby McGee, 16, from Oceanside but now living in Perris, said, “I’ve always been a good handler, but this camp helped me improve my dribbling. Ricardo is one of the best coaches I’ve ever been coached by. He knows talent when he sees it.” 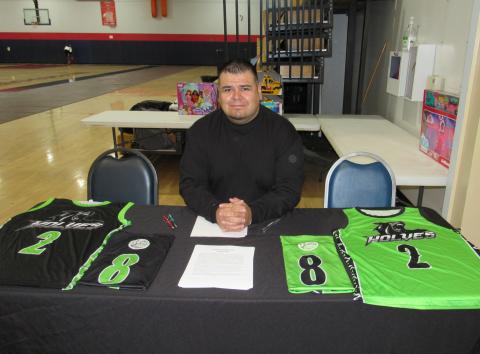 Ricardo Macias is Team Manager and Head Coach for the Wolves basketball team. He recently hosted a camp at the Soboba Sports Complex where he works as the Lead Recreation Aide 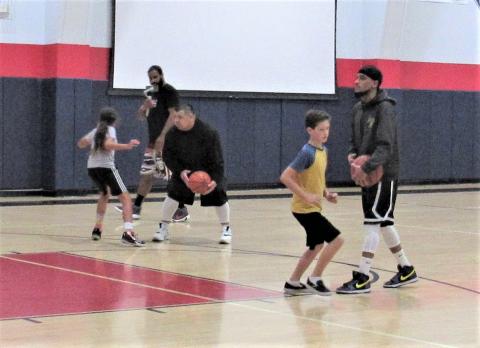 Coach Macias, left, and Coach Samerai work with the players while Coach Joseph Burton, far left, films the action at the Wolves Basketball Camp, Nov. 21 at the Soboba Sports Complex 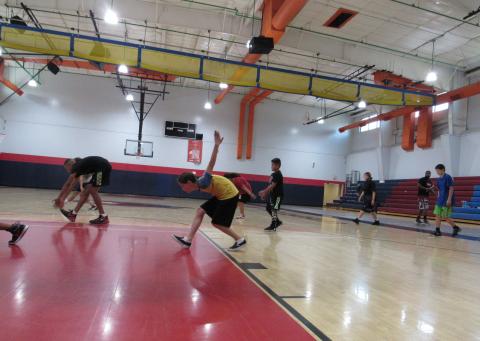 Players work on warm-up stretches at the start of the Wolves Basketball Camp, held at the Soboba Sports Complex 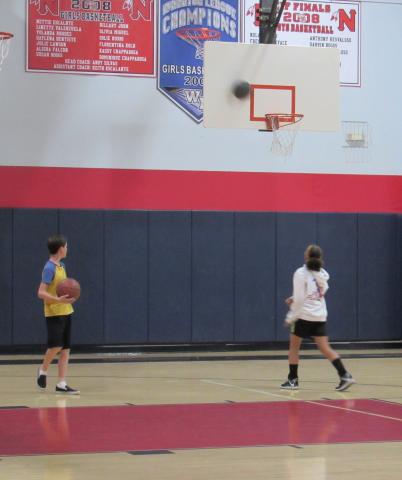 Kaleb Jimenez and Angel Buttler practice their shooting before the start of the latest Wolves Basketball Camp on Nov. 21 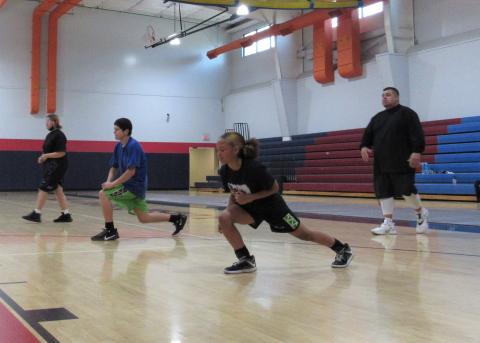 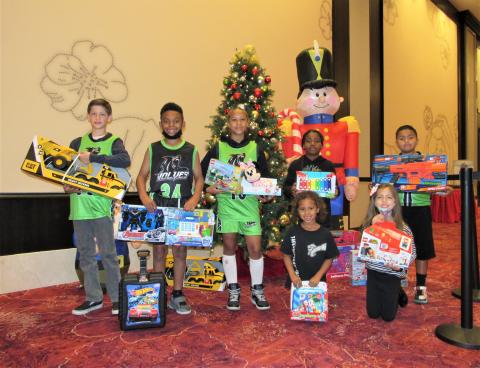 Several Wolves basketball team members and their siblings delivered their toy donations to the Soboba Gives Back! Toy Drive at the Soboba Casino Resort Event Center on Nov. 23 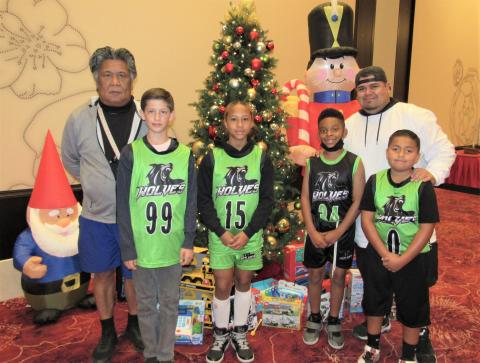