Some plan to continue to graduate school ◆ By Mike Hiles

The Soboba Band of Luiseño Indians has always been proud this time of year when members complete various levels of education – from preschool through college. Although some tribal members attend schools out of state, their accomplishments are noted by the Tribe and applauded by all.

"My whole family was always very supportive with school," said Cozart, 22. "My grandparents, Scott and Dee Cozart, were big influences. When I was young I saw that they were still going to school and pursuing a higher education. When I was older my grandma would always tell me how important school was and encouraged me to always do my best. They helped me to see that education was a tool that can be used for change."

Cozart lived with her mother and stepfather in Lyons, Oregon but spent several months out of the year in Hemet with her dad, Jason Cozart. They would often visit her grandparents, who live at the Soboba Reservation.

She originally wanted to major in pre-health with a track for physical therapy but along the way she decided community health was a better fit for her. She enjoyed all the classes she took in that area and everything she learned from them.

"There are so many things beyond their control that can affect a person's health and people need advocates for health equity," said Cozart, who completed her major in community health and minored in business administration.

"After I finish my second major next spring (in child, youth and family studies), I want to apply to the School of Social Work for a Master of Social Work degree or the School of Education for a master's degree in early childhood education," she said. Both programs are offered at Portland State University, where she has been attending classes since fall of 2014. "I'm not sure exactly where my educational journey will take me and where I will end up but I do know that I want to use my knowledge to do my part in making the world a better place."

She is hoping to continue to be a positive role model for her younger siblings and show them that the power of education is worth the effort.

"My first year of college was difficult," Cozart said. "I had to make the transition from growing up in a small town to going to college in a big city. College is very hard at times and it requires a lot of hard work and sacrifices. In the end, getting a degree is so beneficial in many aspects and it will definitely pay off in the long run."

Sisters Shayne and Sia Knutzen attended different colleges but shared the same exhilaration on the day of their commencement ceremonies, attended by many friends and family members. They grew up in Moreno Valley with parents Jeffrey and Shelly Knutzen and younger brother, Jeremy.

Sia received her degree in psychology in 2016, a field of study she finds very interesting.

"I love learning about how and why people do certain things throughout their lives," said Sia, 25. "My parents always pushed us to strive in education because it is important. This helped me throughout high school and deciding to apply to college."

Her sister Shayne also gravitated to the field of psychology after starting as a chemistry major and also had a double minor in anthropology and sociology. She said that their parents always had high expectations for their children to excel in school.

"Plus, they both coached me in soccer and softball so they were part of many different aspects of my life," said Shayne, 22. "They helped me finish college even when I didn't feel like I could."

One of the biggest challenges Shayne faced was having knee surgery in her junior year and having to stay away from sports for about nine months. She said being a student manager for Oregon Softball had a major impact on her time there, as well as her success, by giving her another lane to express herself.

Sia recalls it was challenging to stay mentally and physically healthy while attending college; trying to balance numerous assignments and tests while practicing self-care. She will be attending Ball State University in the fall to pursue her graduate degree in Applied Behavior Analysis.

"School is hard, really hard, but you have to continue to look toward your goal and remember that it will all be worth it once you are done," Sia said. "Nothing beats the feeling of accomplishment after getting that degree."

Shayne said being Native American – and especially being a Soboba tribal member – gave her opportunities she would not have had otherwise.

"I graduated debt free and with an entire team of people who have my back," Shayne said. "Andrew (Vallejos) was amazing throughout my journey and helped me with anything that I asked. It is awesome to hear that more and more kids from the tribe are seeking higher education; being a small part of the representation is very satisfying and humbling." 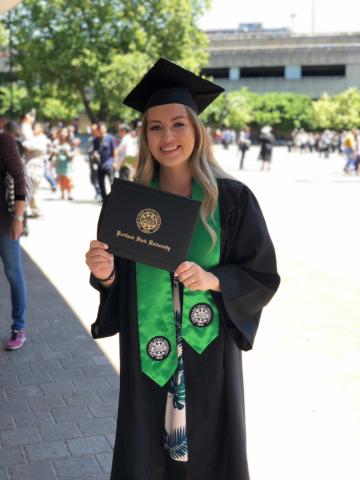 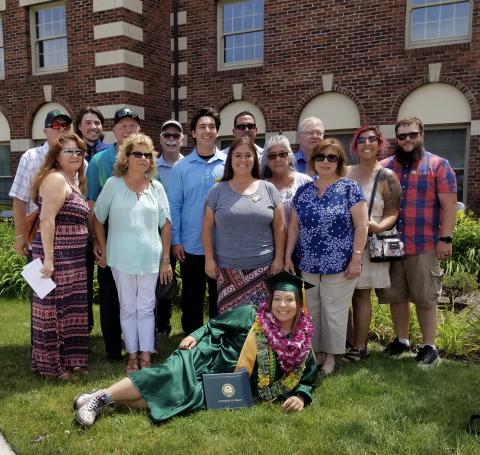 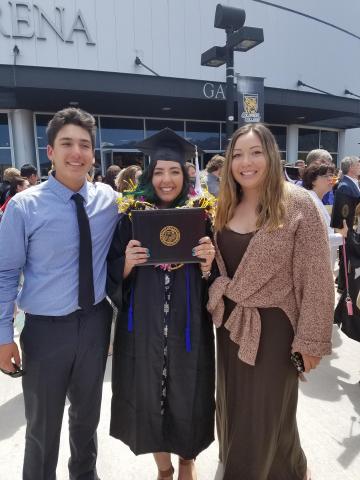 Sia Knutzen, center, is joined by her brother Jeremy and sister Shayne after her graduation from the University of Colorado at Colorado Springs in 2016 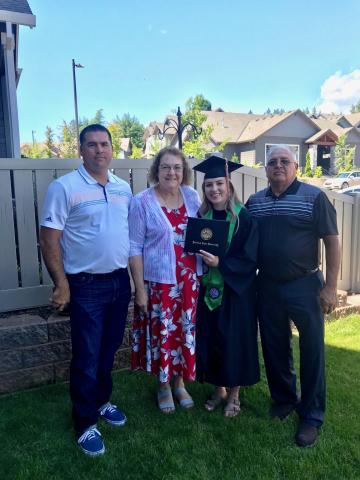 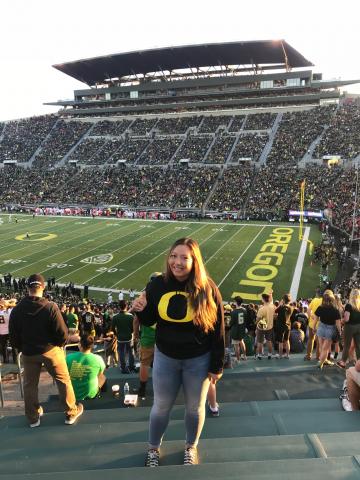 Shayne Knutzen at a University of Oregon football game