Gathering of the People Celebrates All Cultures

When the Four Directions Native American Club at San Jacinto High School began planning its first annual Gathering of the People, it was decided the event should celebrate all cultures. Delia L. Vazquez, the Native American School, Family & Community Liaison for San Jacinto Unified School District for nearly three years, said the parents she works with decided to include other cultures.

“In a meeting with our Native American Parent Advisory Council, parents stayed to talk and voiced they would like to do an event for the students during the month of November which is Native American Heritage Month,” Vazquez said. “The parent council said that the Four Directions club could invite other cultural clubs to be included in the event. One of our parents, Tara Placencia, said, ‘That is how we are as Native People, we are welcoming people.’  It was beautiful that the welcoming and multicultural aspect came from our parents.”

Four Directions Native American Club President Su’la Arviso of the Soboba Band of Luiseño Indians said club members wholeheartedly agreed to invite other campus clubs to join them on Nov. 5 from noon to 8 p.m. to share their cultures and club goals. The free event was held at the school’s courtyard where there was plenty of room for guests to sit and view the many cultural exhibitions and to make their way around the perimeter to visit with various club and vendor booths.

“We always had the idea in the back of our minds that we wanted to host a day where everybody’s culture could be celebrated,” Su’la, 17, said.

Su’la said planning began the first week of school with the main challenge being with scheduling all the singers and dancers to be there on the same day since they were coming from many different areas outside of the San Jacinto Valley. Four Directions club members collaborated with adults to assist with organizing the different groups that presented cultural exhibitions.

“We had to plan for everything from logistics to safety, to inclusion with it being a first-time event,” Vazquez said. “It was all very important, and we wanted to make sure we got it right.”

SJUSD African-American Advisory Council member Sheila Blythe is the School, Family & Community Liaison at the district’s Family Engagement Center and also serves as the advisor for the African-American Advisory Council. She was at the event to support members of the Black Student Union who were sharing details about their club. She works alongside the club so they know there is an adult supporting them beyond the high school.

“This is a great event for connecting our students and bringing unity to our community,” Blythe said. “I’m excited to be out here.”

BSU President Brooklyn McGruder and member Journee Jones said the club has grown over the years and currently has at least 30 members. Journee said the group comes together to share ideas and discuss issues. Brooklyn said the club’s mission is to give students a safe place to go on campus so they don’t feel alone and know they have a voice. “It helps for them to know that you’re in their corner,” Brooklyn said.

When the Intertribal Bird Singers, led by Wayne Nelson, shared some social songs, they were joined by dancers from the Four Directions Club as well as Tribal members who were attending the event. Assembly Member James C. Ramos, who also chairs the Ca. Legislative Native American Caucus, joined them before presenting Four Directions club members with a California Legislature Assembly certificate of recognition for “furthering the education of the Native American people, through history and traditional songs, that still carries forward today and is celebrated at the first Gathering of the People.”

Ramos, a lifelong resident of the San Manuel Indian Reservation in San Bernardino County, is a member of the Serrano/Cahuilla tribe and became the first California Native American to serve in the California State Assembly, when he was elected in 2018.

Providing a strong voice for all Native Americans, since he took office Ramos has introduced 20 Assembly Bills related to Native American issues that have been signed into law by the governor, six of which were passed in 2022. Recently, he oversaw passage of AB 1314, or the Feather Alert, which adds a missing Indigenous person to the existing emergency notification system that informs law enforcement and media about missing children (Amber Alert) and senior citizens (Silver Alert).

“Some members of this (Four Directions) club traveled to Sacramento and testified in support of AB 1703 and helped me lobby it through the Assembly and Senate. So, at a young age they are already engaged in the political system,” Ramos said. “We need to stand side-by-side to address the issues that are still plaguing our people. It’s by working together that we are moving our voices forward in the state of California.”

Vazquez said it was a highlight and honor to have Assembly Member Ramos as a guest to the event. “It was so nice to see him share the stage with our students and hear the encouraging words he had for them,” she said. “He joined in with the Bird Singers and I know he made an impact in their lives.”

Local food vendors were happy to share their fare with guests at the event. Isai Coronado owns Coronado BBQ and Catering and was smoking his own meat on site, saying it takes 16 hours for brisket and 8-9 hours for pulled pork to be just right. He has attended many events at the Soboba Indian Reservation since he opened about a year ago.

Verdie Dennis was sharing delicacies from her Queens of Cobbler shop on Main St. in San Jacinto. She brought samples of her everyday favorites that customers enjoy such as peach and apple caramel cobblers but also had banana pudding for sale. She teased that she has holiday specials coming up soon at the almost one-year-old store but she also caters events.

Frybread Kitchen, owned and operated by Soboba Tribal members, was serving up Indian tacos and frybread favorites throughout the day and Peralta’s Kettle Korn was also getting a steady stream of hungry visitors. Tacos la Patrona parked its taco truck in the courtyard, Panda Produce offered cut fruit and more and the Eagle Brew Coffee Crew served up seasonal blends.

“We set up our coffee station at all the San Jacinto and Hemet football games, as well as private events,” Eagle Brew owner Kyle Martin said. He grew up in San Jacinto and enjoys attending local farmer’s markets and events such as this one to connect with past and present friends and acquaintances. He said the “crew” in his company’s name refers to his customers that he likes to post about on his Instagram page @eaglebrewcoffeecrew.

“One of the special moments of the day for me was when we took a group picture and Geneva Mojado called for all the clubs to join in,” Vazquez said. “It was in the afternoon and the sun was shining and you could feel the warmth and elation from all those students rushing to get in the picture. It felt like we accomplished something special at that moment.” 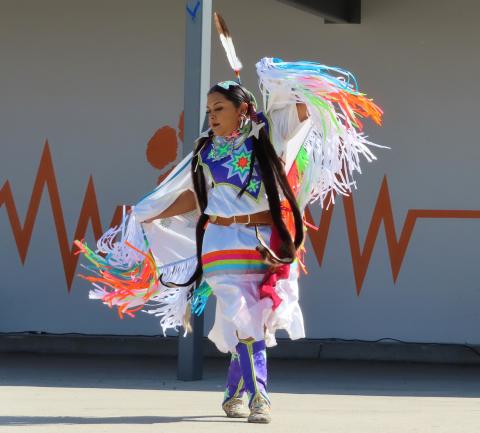 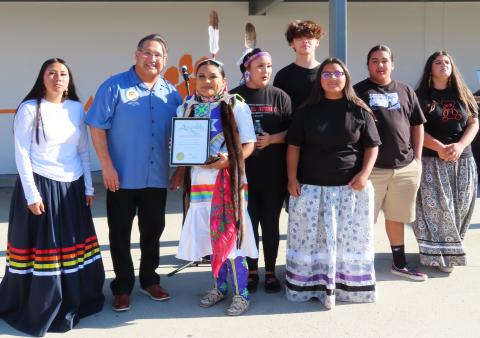 Assemblymember James C. Ramos presents members of the Four Directors Native American Club with a Certificate of Recognition for organizing the first Gathering of the People cultural event 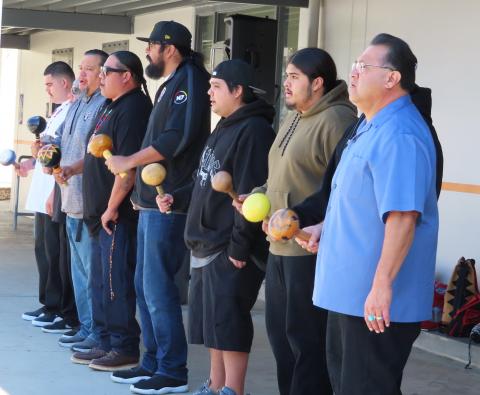 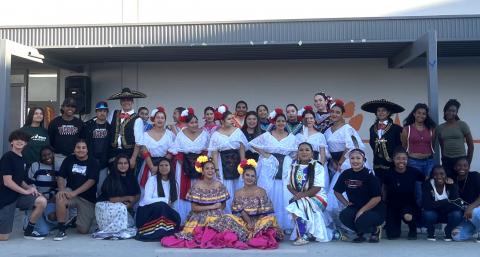 All clubs participating in the first Gathering of the People at San Jacinto High School were invited to join in a group photograph near the end of the eight-hour event, Nov. 5

Members of Red Tail Spirit, based in the San Jacinto Valley and an integral part of the annual “Ramona” outdoor play, shared social songs during the event

Red Tail Spirit invited all visitors to the Gathering of the People, including San Jacinto Unified School District staff, to join in a social Round Dance 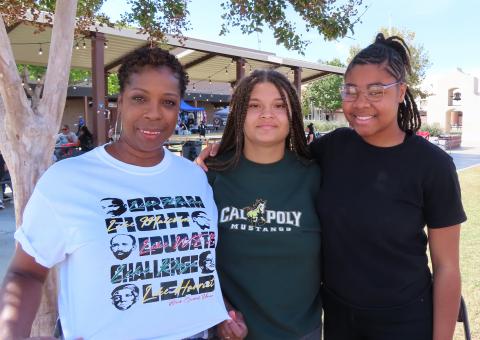 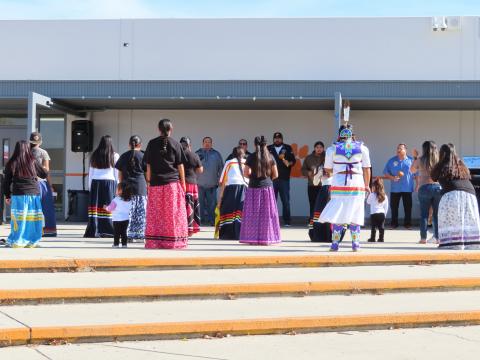 Dancers were invited to join with the Intertribal Bird Singers during the Gathering of the People at San Jacinto High School, Nov. 5