Raven Basquez Gallerito and Wanbli Basquez were among the 17-member Ramona Bowl All Star Band that traveled to England to perform in the London New Year’s Day Parade. About half a million spectators lined the streets along the two-mile route that went from Piccadilly through Trafalgar Square and ended near Big Ben and Parliament. Millions more watched the event on television.

The band, organized specifically for this event, included students in seventh grade through college freshmen from the San Jacinto Valley, surrounding cities and even Los Angeles. Director T J Hepburn said this was the second time he has taken on the task of creating a band for the sole purpose of traveling to London for the parade. The first time was for the new year’s day parade in 2016.

“Everything for the Ramona Bowl All Star Band is done on Sunday afternoons, the time that generally everyone doesn’t have a conflict,” said Hepburn, who is also band director at West Valley High School. “This is one of the hardest things about organizing the band since students are from so many different band programs.”

Raven has been part of the Color Guard at San Jacinto High School for two years, where she is currently a junior. She has been in other parades but this was her first trip to London. A “Harry Potter” fan, Raven said a highlight was being able to visit London’s Platform 9 ¾ at King’s Cross Station, a railway platform made famous through the Potter series.

“I want to thank the (Soboba Band of Luiseño Indians) tribe for helping with the fees so I could go,” said Raven, 16. “I’m very grateful being able to experience this.”

Her brother, Wanbli, is also a San Jacinto High School junior and has been in its marching band for three years, playing the trumpet and bass clarinet.

“My first appearance in a parade was the Hemet Christmas Parade of 2016,” he said. “My favorite experience of being in the London New Year’s Parade was the Native Americans that were behind us during the parade.”

Wanbli, 17, said he especially wanted to thank Soboba for helping him fund the trip, since it was such an incredible experience. Hepburn said the siblings contributed greatly to the band.

“Both come from San Jacinto High School which has been a great place for them to work on their musical and Color Guard skills,” he said. “My highlight is always seeing all the people that come out for the parade and seeing ‘my students’ entertain them, hearing them cheer and clap along.”

It took about an hour for the band to march the parade while playing the high-spirited “Everybody’s Everything (Karate)” by Santana.

Several chaperones and family members took the trip with the students to help coordinate things and Raven’s and Wanbli’s mom, Mia Basquez, was one of them.

“It is a beautiful city with lovely countryside and stunning cathedrals and abbeys,” she said. “I cannot wait to go back for another visit.”

She added that the trip was great for her children because of all they got to do besides the thrill of marching in an iconic parade.

There was a lot of sightseeing that took place during the week spent in England and Wanbli enjoyed visiting Oxford University.

“We also saw a tour of the city, Westminster Abbey, Parliament and went to Windsor Castle and the Tower of London,” Hepburn recalled. “We took a boat tour down the Thames River in Greenwich, where we visited the International Date Line and the Royal Observatory.”

He said there were other countless stops along the way with many highlights.

“I couldn’t have asked for a better group to take to another country, really,” Hepburn said. “All of the adults that came along were helpful and supportive and the kids acted as wonderful representatives of the Ramona Bowl and their individual schools.” 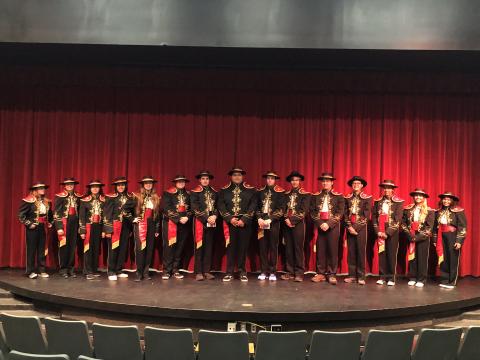 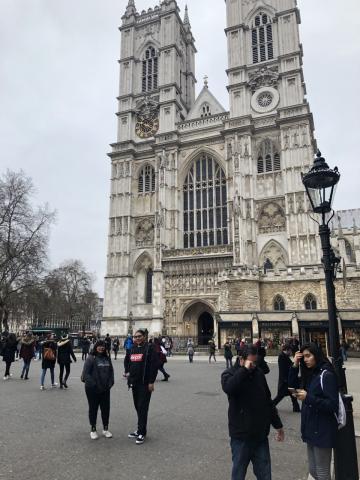 Raven Basquez Gallerito, left and her brother Wanbli Basquez did some sightseeing while in London for its annual parade. The siblings were there as members of the Ramona Bowl All Star Band 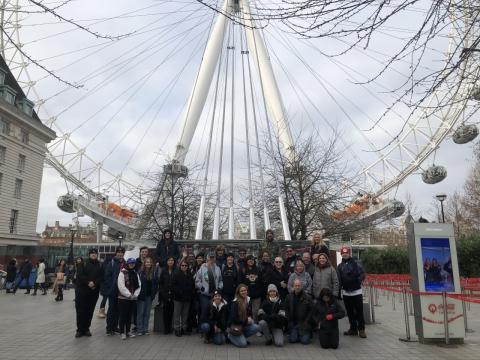 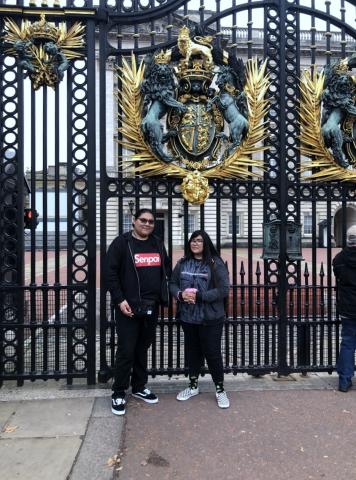 Siblings Wanbli Basquez, left, and Raven Basquez Gallerito were grateful to the Soboba Band of Luiseño Indians for helping to fund their trip to England to perform with the Ramona Bowl All Star Band in the London New Year’s Day Parade and to spend about a week seeing all the sights