It took weeks of designing and planning for the final display of floats to be ready for the Noli Indian School Homecoming Parade on Nov. 1. Grades six through 12 each made a float to match this year’s fairy tale theme. The Soboba Tribal Preschool joined in with their own interpretation of Little Red Riding Hood.

“Our parent committee did everything,” Preschool director Dianne King said. “They even made their own Instagram page for this.”

One of the parents made 3D flowers and a grandmother to one of the students made and donated balloon “trees” to replicate the forest from the story. Stephanie Guacheno has been on the committee for the past eight years, since her first child attended the school.

“The kids had a lot of fun and riding on the float gives them all a chance to dress up and give away the little candy bags they made,” she said.

The parade left the school’s Soboba Reservation parking lot and traveled about two miles up Castile Canyon Road to get to The Oaks football field before the 6:30 p.m. game started. It took about 30 minutes for all the floats to arrive as they stopped along the way so students could toss candy to residents, friends and family members who were parked or seated along the parade route.

Class floats depicted some Disney classics such Beauty and the Beast and Aladdin among other creative entries. First place prize for best float went to the Class of 2026 (sixth grade) for their retelling of Coco, a movie with a Day of the Dead storyline. Second place was awarded to the eighth-grade class of 2024 for its fantastic duplication of the pirate ship from Peter Pan.

The cheer squad, which placed third, played up Alice in Wonderland with sophomore Thalia Morreo in a blue dress and white apron as the young Alice. The team’s coach, Bridget Lowe, also teaches math to high school students at Noli. The 16 cheerleaders got to be on one of the first floats in the parade because the girls had to get for the game.

Following the school safety staff and its recreation of characters from Maleficent were Grand Marshals Antonia Venegas and Louis Rivera. Voted by the student body, Venegas said she was honored to be chosen. She’s been on the Noli school board for four years and is currently serving as president. She regularly helps the students with food fundraisers.

“It’s great to be here – football’s my thing,” she said. “I have brothers, cousins and other relatives on the team.”

After all the floats were parked at The Oaks, students began tearing them down.

“It’s a tradition,” senior Timothy Salgado said. “We take them all apart and those that put in a lot of work take some of the pieces home. The little kids get pumped that they get to take some things, too. It’s very exciting for everyone.”

The football game was dominated by the Noli Braves as they defeated the rival team from Indio’s Riverside Education Academy Tigers. The final score was 58-16. Coach Robert Stover and Assistant Coach Jesse Aguilar said the team has been strong all season long and were glad the players could keep up the momentum through this important game.

Halftime was all about royalty as the Homecoming Court was introduced and the King and Queen were chosen. Lowe took over the microphone from the play-by-play announcer to welcome the court to the 50-yard line.

A dance afterwards at the Old Tribal Hall was a celebration of a great game, a coming together of the school’s alumni and a chance to have fun with friends and family. 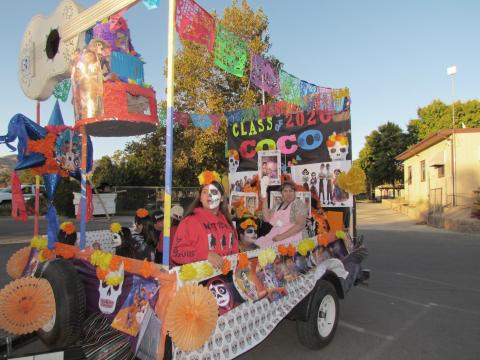 The sixth-grade class from Noli Indian School placed first in the homecoming parade float contest for its elaborate “Coco” depiction. 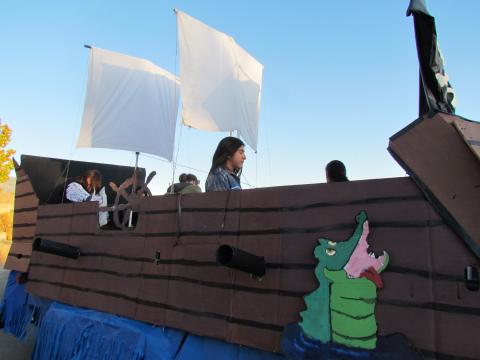 Noli Indian School’s eighth-grade class placed second with its pirate ship from Peter Pan as a float for the homecoming parade. 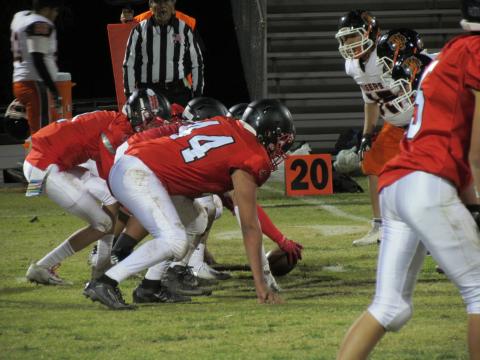 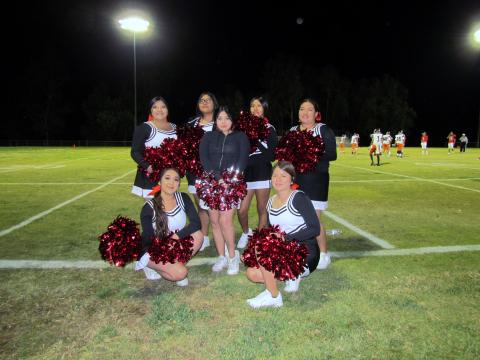 The Noli Braves cheerleaders helped the team win its homecoming game at the Soboba Reservation on Nov. 1. 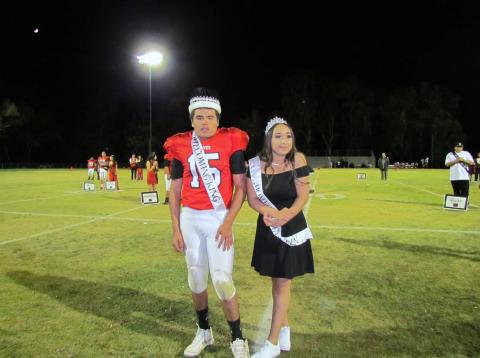