Middle and High School students from Noli Indian School at the Soboba Reservation were honored for their hard work for the first semester of the 2019-2020 school year with an Academic Awards Assembly on Jan. 22.

“We are not really here to celebrate the awards but rather what was put into earning the award,” Principal Donovan Post said as he welcomed students and their friends and family members who attended the event held at the Soboba Sports Complex. “Everyone has the opportunity to accomplish this. That’s why we’re here – to celebrate the hustle that’s behind the recognition.”

Teachers voted for students in grades six through 12 for various achievements. Leadership awards were given to one student from each grade level that demonstrated strong qualities in and out of the classroom. Those that acknowledged and exemplified the school’s

3Rs of respect, responsibility and reflection were rewarded for their good citizenship. Students showing significant improvement from their first to second quarter were also applauded.

“A lot of hard work, effort, determination, mindset or whatever changes need to happen on your end took place to make you feel like you could do this and we are here to congratulate you on being recognized for it today,” Post said.

He added that this school year has produced more family involvement than ever before and was appreciative of all the family members that give of their time and help out in many ways. Students are positively impacted by teacher motivation and family interest.

Individual classroom awards were also presented. Certificates were given for having the highest grades in the class, contributing to a positive culture in the classroom and other customized reasons. Several awards created by each teacher were presented during the event.

Students who showed the most improvement from the first quarter to the second quarter were recognized with certificates and medals. They were Ferdencia Morreo (6), Johnny Gutierrez (7), Leandro Silvas (8), Debra Chapparosa (9), Elle Nevarez (10), Raymond Masiel (11) and Melvin Herbert (12).

Those who earned a GPA of 3.5 and above were named to the Distinguished Honor Roll. Middle schoolers were Daigan Cyhan, Sadie Pimentel and Shawna Rivera. Upper grade students who were recognized for this achievement were Leila Arres, Iyana Briones, Tatianna Briones, Anthony Contreras, Melvin Herbert, Tishmal Herrera, Lanise Luna and Shalea Luna.

Bailee Lindsey was presented with a certificate of achievement and medal for attaining the highest level of a 4.0 GPA, enabling her to be on the Principal’s Honor Roll.

Post said some students are not sure how to handle receiving positive accolades and provided some advice to them: “Believe in yourself more than the staff believes in you.”

Noli Indian School’s high school history teacher Michael Plemons awarded a “Historian” designation to four of his students that he said not only demonstrated the 3Rs in his classroom but were also A students. From left, Melvin Herbert, Alex Vallejo, Plemons, Shalea Luna and Bailee Lindsey. 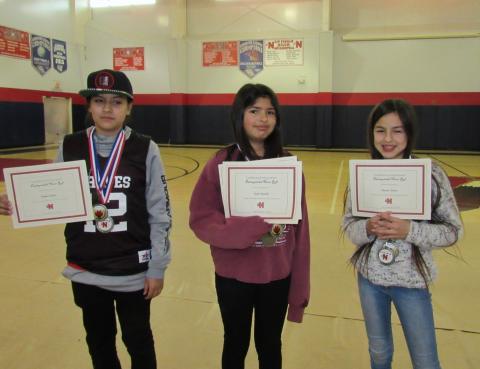 Middle School students at Noli Indian School that were named to the Distinguished Honor Roll for having a GPA of 3.5+ were, from left, Daigan Cyhan, Shawna Rivera and Sadie Pimentel. 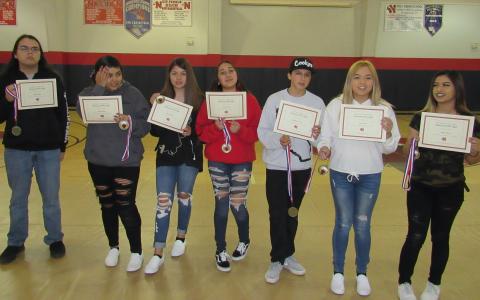