The Noli Braves football team scored big against Indio's Riverside County Education Academy to win its homecoming football game on Oct. 26. But the school had begun its celebration earlier in the week when each grade level worked together to design and execute a Halloween-themed float for the big night.

Parents and community members stepped up to donate their time, pick-up trucks and flatbed trailers for the classes to use to transport their floats from the school's parking lot, that is shared with the Soboba Sports Complex, to The Oaks where the football stadium is located.

Led by a staff-member decorated jeep and Grand Marshal Lucille Briones, whose son Delbert was nominated for Homecoming King, the floats made their way through the Soboba Reservation streets in a parade that brought out many spectators with bags to collect candy that students tossed along the route.

Floats were judged by Noli's school board members on how well it fit the "Halloween Time" theme, originality, craftsmanship, effective use of materials, level of effort/difficulty in construction, good and appropriate use of color and team spirit. Group members were also evaluated on their liveliness, energy, enthusiasm and stamina along the parade route.

Winners were announced at the halftime festivities and first place went to the Class of 2025 (sixth grade) for its Clowns vs. Humans display.

"We thought of doing a zombie apocalypse first but then decided clowns would be scarier and we'd include the last human standing," said Andrew Salgado-Lopez, 11. The last human was depicted by Daigan Cyhan, also 11.

Each class had teacher advisers to help the students develop their project ideas, collect the necessary items to build it and then actually construct it, finishing up on Friday. While many of the students thought making a float was a pass on having to sit in a classroom and learn, teachers had other ideas.

Doug Falk teaches math and photography at the school and had his students use their engineering skills to figure out how to make a huge pumpkin that would hold up. While some other classes decided to use "The Nightmare Before Christmas" theme and characters such as Jack Skellington, students from the Class of 2021 focused on Jack's character as the Pumpkin King of Halloween Town.

"They used a lot of their math skills – and PVC pipe – to make this happen," Falk said.

The students spent about four days making the mighty pumpkin, according to Sheila Pimental, 16. She said the "shell" was started with chicken wire that was tested in a variety of ways to find the most stable way to wrap it.

"It was pretty fun working on it," said Mario Castellano, 14. The two students were joined by Frankie Garcia, 15, to ride the float in the parade.

Seventh-graders, led by science and English teacher Richard Moreno, depicted a Zombie Area and won a second-place prize for their efforts. Third-place honors went to the eighth-grade Class of 2023 for their "Haunted Horror" float that recreated scenes from famous horror films with help from culture teacher Tashina Ornelas.

The senior class chose Ceyleah Matthews as its Homecoming Queen and Damien Marsical as Homecoming King. They were crowned during the halftime activities.

Noli Indian School didn't always make such a big deal about Homecoming since many students live on non-local reservations and therefore the youth didn't have the same community experience as most schools. When Principal Donovan Post took over as its head administrator more than a decade ago, he noted issues with tribal diversity.

"We weren't blending like most schools do and I recalled when I was at San Jacinto High School we'd have a Homecoming Week of activities and it brought us all together as a school," Post said.

He recalled having a big parade down Main Street and a bonfire at the school that the community would enjoy.

"We had good clean fun and we would take the floats around the football field and a lot of alumni would come – it was a cool vibe," Post said.

He said once he proposed the idea at Noli, it was met with enthusiasm that slowly changed the culture of the school.

"Now we have Letterman jackets and other things that have helped give the students a sense of school pride," Post said.

He added that he hopes the homecoming activities will create "good life memories" the young men and women can take with them. He said that even though the float building can be overwhelming at times, it has led to a friendly competition among the grade levels. 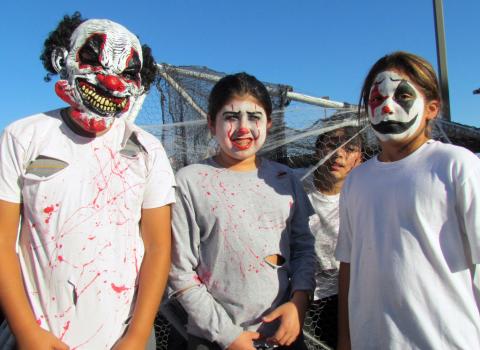 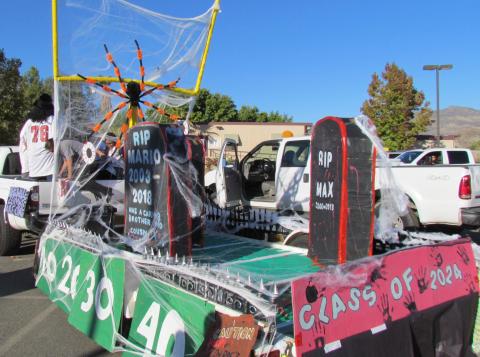 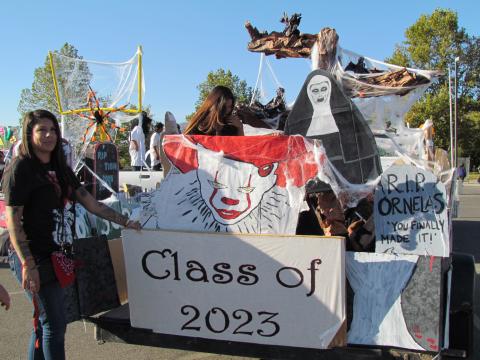 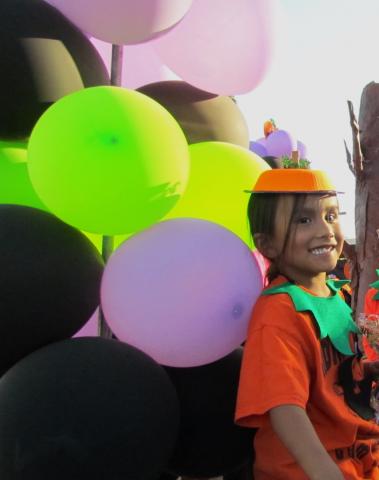 Soboba Tribal Preschool kindergartner, Paa’ayat Arviso, 5, wears a pumpkin hat he painted while riding a float with his classmates as part of the Noli Indian School Homecoming Parade on Oct. 26 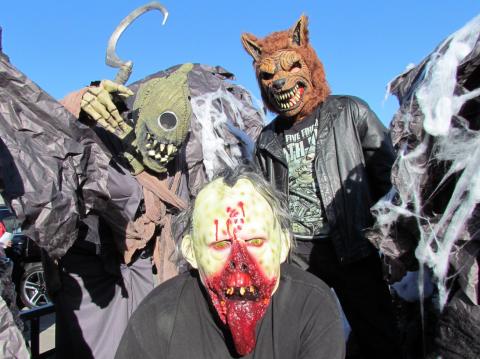 Noli Indian School art teacher Danielle Grass, left, met with students Xavier Hernandez, middle, and Carmel Valenzuella as a werewolf in the “Monster Forest” as part of the Class of 2022 float 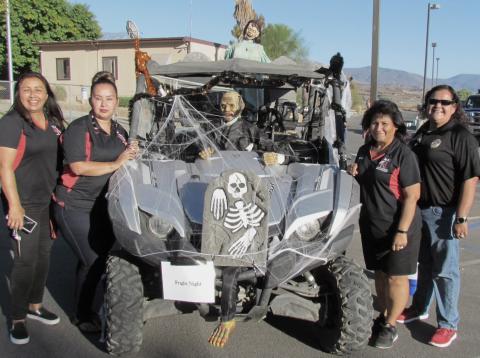 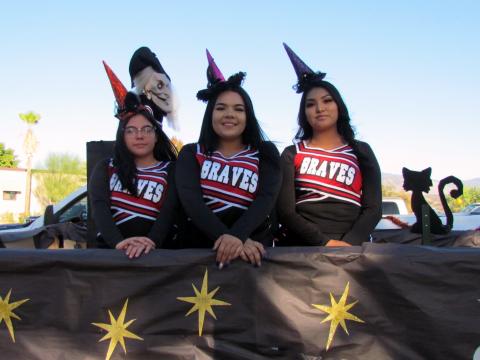 Three of Noli Indian School’s cheerleaders participated in the Homecoming Parade with a float reminiscent of Disney’s “Hocus Pocus.” From left, senior Shambrae Kinlicheenie, junior Erika Modesto and Junior Roxy Castello. Not pictured is senior Shaleen Castello, who was nominated for Homecoming Queen