As members of Noli Indian School's class of 2017 made their way across the stage at the Soboba Outdoor Arena on June 7, recorded messages told of their future plans, best memories of the Soboba Reservation school and their favorite quote. Family and friends were armed with confetti cannons, air horns, flowers and lots of helium-filled mylar balloons to show their support for the young men and women who had reached this milestone.

Valedictorian Larissa Lugo expressed her appreciation to family and friends for supporting her on her academic and personal journey but also gave a shout out to Noli's Culture Department and teacher Tashina Ornelas.

"I have learned a lot and you have inspired me to be better and want to be more involved with my culture," said Larissa, 18.

She then went on to compare each student's life journey to that of making a basket, asking everyone to imagine a basket that represents who they are.

"Is it a plain basket or does it have color? Is it big or really small? What designs are woven into your basket? What materials will you use?" she asked.

"They are all different but all are needed within the community," Larissa explained. "Just like everyone here on this stage is unique. Not all of us represent the same tribe or have grown up the same way. Not all our basket materials are going to be the same, like the paths we chose after today. But we all have woven what we have gained here at Noli into our baskets."

Larissa explained that there is no rush to work at the same pace as others when making the basket and that time and patience will make it sturdier so it will last longer.

"What will you hold within it? It can be positive or negative – no one else but you have the power to decide this," she said. "You may not know how to make your basket right away and that's okay as long as you are determined to finish what you start."

Ciara, who is a volunteer at the Malki Museum on the Morongo Reservation, also cited the culture class as a strong memory of her time at Noli, where she learned to make baskets and string figures. "I tried something new and I loved it; my Cahuilla culture is very important to me," said Ciara, who started attending Noli in her sophomore year and encouraged the incoming seniors to "believe in yourself." Her favorite quote is from Wayne Dyer: "Happiness is not something you get in life, it's something you bring to life."

A few graduates have plans to continue their education at Mt. San Jacinto College or Cal State San Marcos and some have already identified a career path of auto mechanics, such as Raymond and Steve, or fire technology such as Alex.

Three young women who have attended Noli since sixth grade have also made career choices. Patricia and Antiana want to return to Soboba after college to teach future generations at its preschool campus. Sabrina, who said her favorite memory was being part of the cheer team, plans to pursue her dream of going into law enforcement. Tenielle intends to go to culinary school.

Guest speaker Tishmall Turner is Vice Chairwoman of the Rincon Band of Luiseño Indians, an activist for Indian education and serves as the Tribal Liaison for Cal State University, San Marcos. She quoted Mark Twain in the opening of her speech to the Noli Indian School Braves.

"Twenty years from now you will be more disappointed by the things you didn't do than by the ones you did do…so explore, dream and discover," she told them. "There are many paths opening up for you and the hardest part is to leave the village. But what's at stake is our collective future as Indians. You will inherit decisions made by adults in leadership today. But what I see before me today is not a group of Noli Braves – I see a group of warriors. You are not alone; your ancestors stand beside you. Respect others and yourself. Keep learning and be prepared to meet the challenges of change." 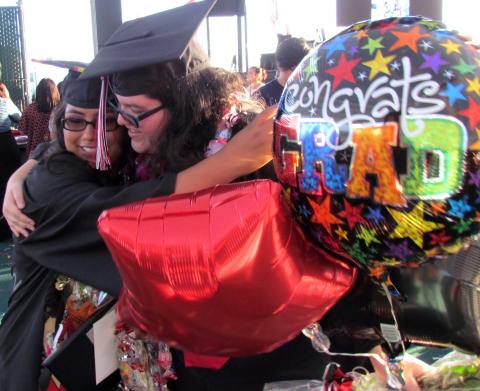 Noli Indian School valedictorian Larissa Lugo, left and salutatorian Ciara Herbert congratulate each other after their commencement ceremony on June 7 at the Soboba Outdoor Arena 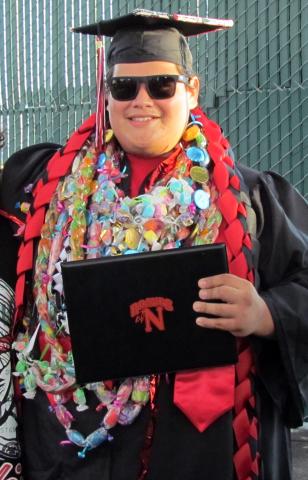 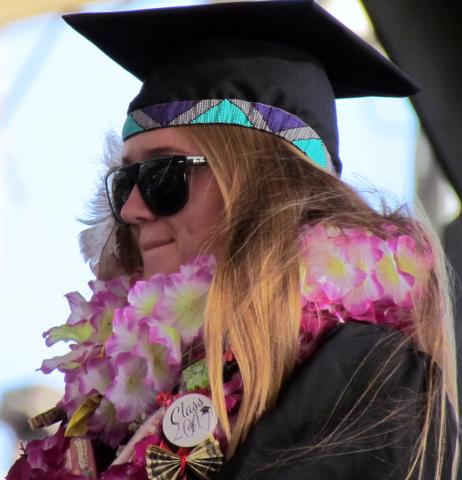 Chase Davies was one of 13 seniors to graduate from Noli Indian School on June 7. She was very active in sports and student government. She will attend Haskell Indian Nations University in Kansas