Like many others, Noli Indian School students have been faced with unpredictable circumstances during the past couple of years. That is why Principal Donovan Post and staff didn’t want to see them entirely miss out on a homecoming celebration again this year. The Soboba Reservation school serves students in grades 6-12 but it was the high schoolers that finally got to have their special day after a couple of weeks of delays.

Traditionally, there are activities all week long leading up to a homecoming football game. Each class works on building a float that follows a chosen theme and the vehicles provide a parade through the reservation from the school grounds to The Oaks. The homecoming King and Queen are then chosen.

Due to circumstances beyond the school’s control, the date got pushed back two weeks from its original date of Oct. 29. Since the delay caused them to scrap a football game, administrators had to shift gears to provide the students, especially the senior class, an opportunity to have some type of event. That is when the Homecoming Coronation and Dance was organized for Nov. 12.

Since the students also had their Red Ribbon Week interrupted at the end of October, all students were treated to a barbecue lunch on campus with the help of Department of Public Safety personnel. Soboba Elders were invited to join in the school’s lunch and interact with the students as they resumed their Red Ribbon Week celebration. There was music and many fun activities before the 5 p.m. coronation of this year’s Homecoming King and Queen took place at The Oaks.

Despite the lack of a parade this year, Soboba tribal member Alice Helms was deemed Grand Marshal and was the first to make her way under the archway of black and red balloons set up at the 50-yard line of the football field. The balloons, which reflected the school’s colors, was created by the Nevarez family. Recognized for her involvement in many aspects of her tribe, Alice was accompanied by her son, Benny Helms Jr. She said all of grandchildren graduated from Noli and she has two great-grandchildren there now, Jesse Garcia and Mexeel Garcia. She has always been actively involved with the tribe and her late husband, Benny Helms Sr., served on Tribal Council and was known as a very talented football and baseball player and coach.

About 100 invited friends and family members sat in the stadium bleachers to cheer on the homecoming court as they made their way onto the field, created by the Nevarez family. Cell phone cameras and applause met each student as they were called to the field. The stadium’s bright lights illuminated the football field but each student shined in their own way.

Freshman Class Sweethearts are Babe Briones and Mexeel Garcia, both from the Soboba Band of Luiseño Indians. Babe, 14, is the son of Duke and Santana Briones and Mexeel, 14, is the daughter of Dwan Helms-Garcia. She has attended Noli since the sixth grade and participates in basketball, softball and volleyball. She said she wasn’t surprised to be chosen; she was shocked. Babe has been at the school for one year. He said he was happy he was selected for this recognition.

Sophomore Class Duke is Damien Vega, son of Lisa Ortega and Sophomore Class Duchess is Luisa Rivera, daughter of Louie Rivera and Tanya Briones-Rivera. Both students are members of the Soboba Band of Luiseño Indians. Damien, 14, has been a Noli student since eighth grade and is active in ASB and AVID. Luisa, 15, has attended the school since sixth grade and is involved in all varsity sports as well as ASB and AVID. When she found out she was named Duchess, she said, “I was happy because I thought I was going to lose.” Damien said, “I was excited; I threw my hands in the air yelling ‘heck yeah!’”

Junior Class Prince Addis Martin is the son of Anthony and Maulette Martin. Addis, 16, is a member of the Morongo Band of Mission Indians. Junior Class Princess Ciara Ramos, 16, has been a Noli student since sixth grade and is active with ASB and AVID. She is a Soboba tribal member and serves on its Youth Council.

Each senior who was nominated for king or queen were introduced and walked out to the center field to wait for the winners to be announced. The following nominees were not able to attend the event: Frank Moreno, Rudy Pimental, Carmel Valenzuella IV, Caitlyn Briones, Alena Duenas, Natehya Magante and Melissa Sosa.

Nominated for Senior Class King were Michael Thunder Briones, Jesse Garcia and Jeremiah Ramos, all of the Soboba Band of Luiseño Indians. Michael, 17, is the son of Christopher Briones. He said he was happy to be nominated. Jesse, 17, is the son of Dwan Helms-Garcia and started at Noli in his freshman year. He is involved with ASB. Jeremiah’s parents are WooLoo and Orlando Mendoza. Jeremiah, 17, played football is an active member with Soboba Youth Council. Michael said he was happy to be nominated.

Senior Class Queen nominees were Lanise Luna, Abby Nevarez and Ellie Mae Nevarez. Lanise, 17, is the daughter of Llair and Juanita Luna and is from the Pala Band of Mission Indians. She has been at Noli since sixth grade and is participates in AVID and the Beading Club. Twin sisters Abby and Ellie Mae, both 17, are the daughters of Mike and Regina Nevarez and are from the Soboba Band of Luiseño Indians.

All students were invited to attend a dance at Tribal Hall from 7 to 11 p.m. where there was lots of music and refreshments. 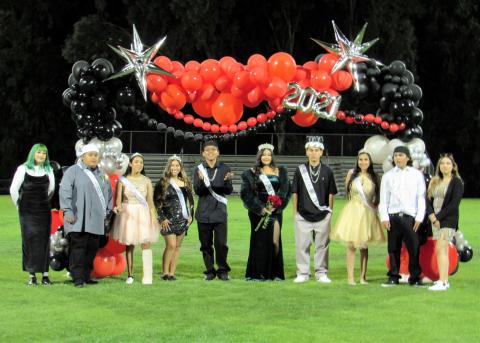 Noli Indian School’s homecoming court are recognized during a coronation ceremony at the Soboba Reservation’s The Oaks football field Nov. 12 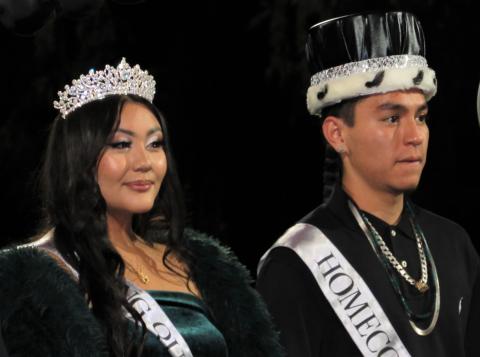 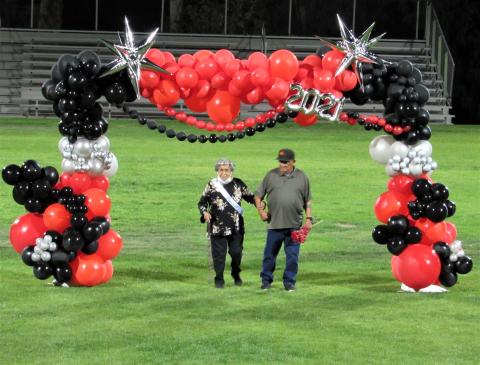 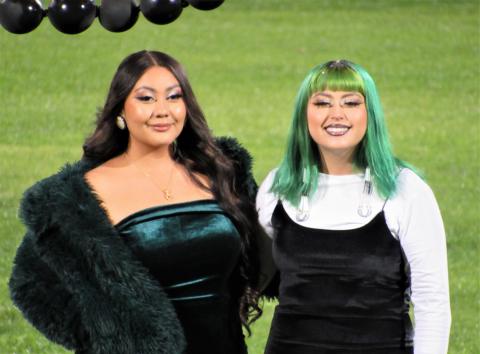 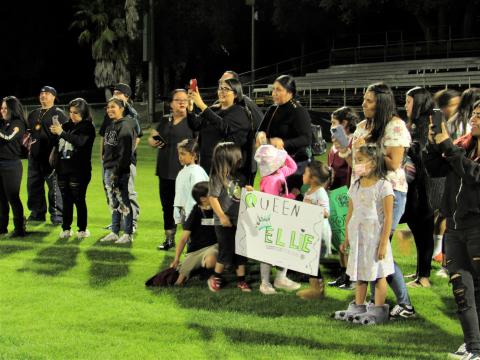 Family and friends of Noli Indian School royalty take photos of members of the Homecoming Court at The Oaks on Nov. 12