The Lady Braves at Noli Indian School on the Soboba Reservation are taking the girls volleyball team to new heights this year as they continue a winning streak that began on Aug. 28. As the regular Warrior League season comes to an end with an away game on Oct. 16, the players are staying motivated.

Coaches Andrea Helms and Brian Savage work tirelessly to keep the girls at the top of their game with almost daily practices and twice weekly games.

Helms has been at Noli for eight years and coaching the girls volleyball team for four.

“We have a team of strong girls who have the want to play,” Helms said. “They have a good attitude and the competition has been pretty evenly matched this season.

She said her goal for each game is the same: looking forward to getting the win.

“Our returning players are working well together with our new players,” said Savage, who has worked at Noli for 15 years and has been helping coach the volleyball team for two years. “We have put a lot of focus on defense this season.”

He said the team has been working to improve its serving and its consistency, but they have been doing a great job. Many of the players are multi-sport athletes and Savage said that can be a double-edged sword.

“It’s an advantage because they stay athletic year-round but is can sometimes be a disadvantage if they overwork themselves and suffer from being tired,” he said.

The senior said she tries to be as supportive as possible, especially to the freshmen players. She said when someone gets down, it brings the whole team down so she tries to build everyone up so they can continue to do good.

“I try to be a good leader and help out as much as I can,” said Luna, who is from Pala. “Serving is my strength and I’m working more on my spiking and setting but I love everything.”

Amy Soza played volleyball while in middle school at Noli, which she has attended since sixth grade. She also plays basketball and softball. As one of several freshmen on the team she said she thinks her ability to play back row well is her strongest contribution to the team.

Sophomore Abbie Nevarez said she started with the team this year because her mother encouraged her to play a sport and now is considering playing basketball as well.

“I think my best skill is supporting the team – sometimes players forget what we learned in practice and I can remind them,” said Nevarez, of Soboba. 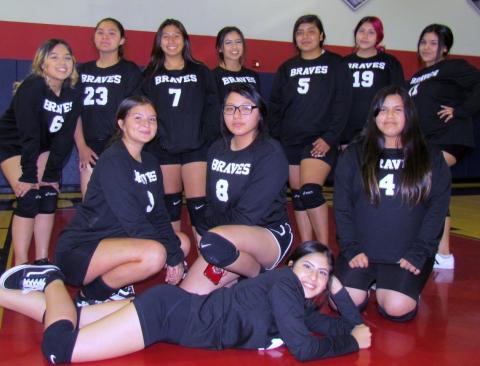 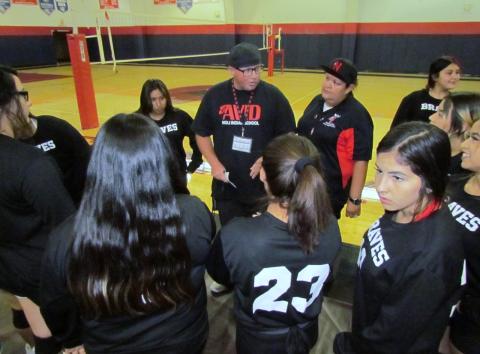 Coaches Brian Savage and Andrea Helms, center, gather the team for a quick pep talk before the start of their game on Sept. 25. 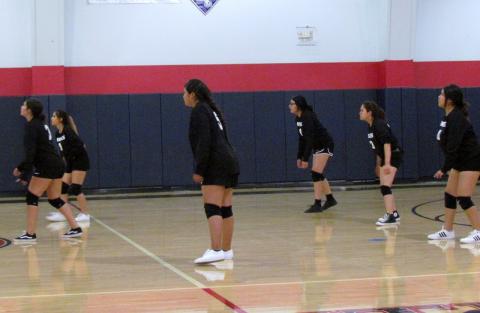 Noli Indian School Lady Braves get ready to return a volley during a recent game against River Springs Charter School from Hemet. 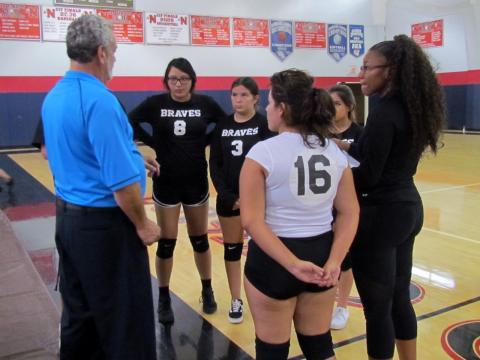 A referee goes over some rules with captains and coaches of both teams at a recent volleyball game between Noli Indian School (of Soboba Reservation) and River Springs Charter School (of Hemet).