Runners arrived at The Oaks on the Soboba Reservation at 7 a.m. on Saturday, April 14, to participate in the seventh annual Trail Race, hosted by the Soboba Band of Luiseño Indians’ Parks and Recreation Department and its director, Andy Silvas.

The 5K, 10K and 25K races all followed the same route, just adding laps for the longer races. Even though the races were timed, most of the participants came for the workout and the opportunity to enjoy the beautiful scenery along the course.

“I am so lucky to be able to come out here and enjoy this every day,” said Tekla Diaz, a tribal member who regularly hikes and runs the trails to stay fit.

Diaz has participated in the Trail Race every year since it began and completed the 10K in about two hours, earning a win for her age division.

Kiana Castello finished the 10K in one hour and 25 minutes, placing first place for 15- to 19-year-old females and third place overall for females.

“I’ve always done the 5K before so I wanted to push myself and knew I’d regret it if I didn’t do it. I felt good when I was done,” she said. “I used to love running and I still play basketball, now at Mt. San Jacinto College. I also lift weights and belong to three different gyms.”

Jade Morillo, a junior at Hemet High School and a member of its cross-country track team, won her age division in the 10K as well as the overall 10K female runner with a time of one hour and 11 minutes.

Silvas and his crew spent the past week clearing the course of weeds and debris and inspecting it for ruts and other erosion that needed repairing before the race.

“We went over it with a tractor,” Silvas said. “The trail is pretty dry and powdery today.”

Six workers were stationed throughout the course to guide and assist runners, including one person operating a drone over the hilly terrain.

Teams competing in the race included 16 runners from Sherman Indian High School in Riverside. Kina Brings-Plenty, 18, from Pine Ridge, South Dakota attends the off-reservation boarding school for Native Americans. He won his age division for the 5K as well as the overall 5K male runner by finishing the course in 21 minutes.

A team from Golden Era Productions has participated in the race before and do double duty by distributing anti-drug literature when not out on the course. Members of this year’s four-member team were Uli Ginter, 48, Bernadette Mueller, 50, Ben Sproule, 44, and Linda Sukkestad, 60. They all ran the 5K together. Along with placing in their age divisions, Ginter placed third and Mueller placed first overall for females and Sproule won his male age division.

Silvas said one major change from last year was the direction of the course, which proved to be a challenge for some returning runners.

“It’s a tough course and it was more grueling going this way,” said Sproule. “This way was more technical so you had to pace yourself and listen to your body to know when to run and when to take it easy.”

Ginter said she ran the race more for the scenery than to be competitive.

“The environment here is so beautiful,” she said.

“This was my first time on this course,” said Lindsey, 46, of Barstow. “I definitely had a good time.”

The youngest competitor was six-year-old Ronald Resvalaso, who ran the 5K.

Negative Split Running has been working the Soboba Trail Race for the past five years. The Newport Beach-based company was started 10 years ago by Chad’s father, Lambert Timmermans.

“We are ultrarunners who run races well beyond marathon distances,” he said. “Tracking is important and in loop courses, keeping track of loops is extremely important. Sometimes events go on for up to a week of one-mile loops with many participants.”

The company handles about 40 races per year.

“We have the ability to track and time races of all sizes under even austere circumstances, including triathlons and biathlons with multiple check points,” Timmermans said. “We've even timed horses.”

Final results for all runners will be available at www.negativesplitrunning.com. 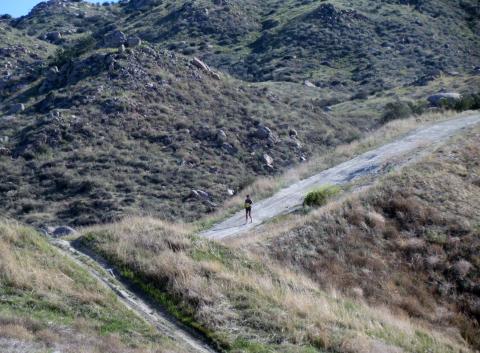 Jade Morillo makes her way down the path near the end of the 10K Trail Race at the Soboba Reservation, where she placed first for her age division and first overall for female participants 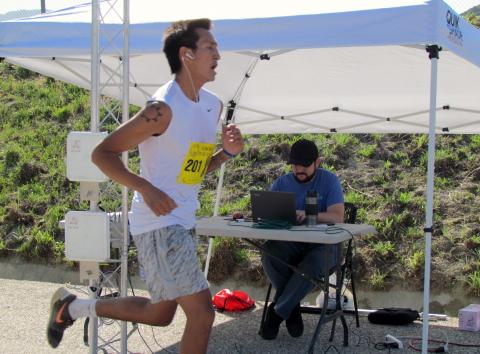 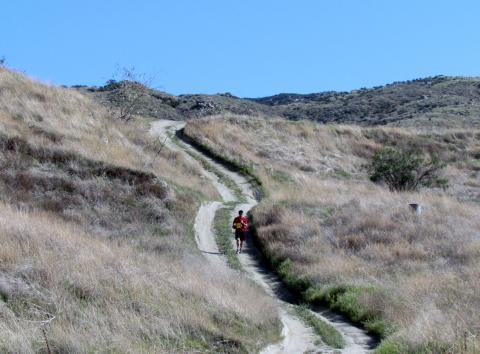 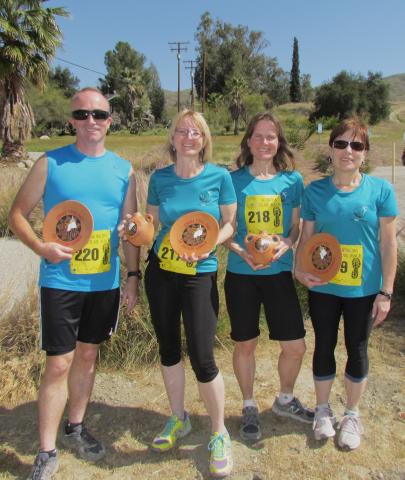 A team from Golden Era Productions had a productive day on the Soboba Reservation course at the seventh annual Trail Race. From left, Ben Sproule, Uli Ginter, Bernadette Mueller and Linda Sukkestad