The annual San Jacinto Rotary Club awards dinner that got put on hold for a couple of years due to the pandemic, returned March 21 to recognize six honorees who make a difference in their community. Among them was Marian Chacon who was named Soboba Tribal Elder and Community Leader for 2022.

Born and raised on the Soboba Indian Reservation, Chacon celebrated her 86th birthday in February and is one of the many respected elders on the reservation. She has been part of St. Joseph’s Catholic Church for many years and serves on the Mission Council Board. She was unable to attend the dinner because she teaches a Catechism class at the church on Monday nights, so Soboba Tribal Council Sergeant at Arms Kelli Hurtado accepted the award on her behalf.

“Marian is big on tradition and has strong family values that she has passed onto many of us,” Hurtado said. “She enjoys living her best life with her grandchildren and great-grandchildren. She continues to help and be a big part of our community. She is a special person to me and that’s why I’m honored to be here today.”

In 1995, Chacon taught the Soboba Youth Council how to take over and conduct the Memorial Day Ceremony held at the Soboba Cemetery. She is active with the Soboba Tribal Preschool’s many activities.

“In 2014, Marian took me under her wing to teach me how to sing for our funerals and wakes, for when our people pass away,” Hurtado said. “She is one amazing lady, and I am proud to call her my friend.”

Chacon also received a certificate of recognition from the Riverside County Board of Supervisors, represented at the dinner by Fifth District Supervisor Jeff Hewitt. The certificate was “to honor and recognize Marian Chacon for her services as a Soboba Tribal Member. Thank you for your dedication and leadership in our communities. We offer our congratulations and look forward to your successful future endeavors.”

One of those endeavors will take place on April 30, when Chacon will once again oversee the annual Soboba Youth & Elders Walk, which she started many years ago.

Chacon was very surprised and honored to receive this award but said she gets a lot of help with all the projects and programs she is involved with.

“It’s not just me who does all these things; the award really belongs to the Soboba community,” she said.

San Jacinto Rotary President Craig Shultz said to Hurtado, “I don’t think there is anyone in this room that hasn’t been touched by the generosity of the Soboba Band. We thank you, the tribe and Marian for everything you do for the community.”

Other honorees were Bethany Gibson and Herman Hilkey, San Jacinto Unified School District Teachers of the Year and Police Officer of the Year Deputy Scott Milburn. Also singled out for service was the Salvation Army as Nonprofit of the Year and Grumpy Tom’s Pizza as Business of the Year. Dr. Shari Fox, former SJUSD superintendent, was honored as Citizen of the Year.

Gibson is an English teacher at San Jacinto High School where she has taught everything from sophomore English to Expository Reading Writing Curriculum and International Baccalaureate Literature and Language HL. She was chosen for going above and beyond to coach and mentor students to not only dream bigger than they have ever been encouraged to dream, but to truly believe in their abilities to achieve those dreams. The positive rapport and relationships she has with her students provides the foundation for their academic success and earned her 2018 Teacher of the Year as voted by the Senior Class of 2018.

Hilkey has taught science at the San Jacinto Leadership Academy for the past six years. Prior to that, he taught for 11 years at San Jacinto High, seven of which he also served as the Science Department Chair. He was recognized for continuously exploring opportunities to make science relevant to all his students with “hands-on” laboratory learning activities that encourage his students to think critically. As a result, he is very connected to his students, making him truly one of their favorite teachers.

Milburn was selected for this honor by the sergeants at the San Jacinto Sheriff’s Station. During 2021, he was assigned to the San Jacinto Sheriff’s Station patrol, Soboba special assignment and field training officer. He serves his community with pride, successfully prepares the next generation of deputy sheriffs and truly exemplifies “service above self.” Statistics for 2021 highlight the work Milburn continues to do on a daily basis: 538 calls for service, 34 felony arrests, 51 misdemeanor arrests and 44 citations. In December 2021, Deputy Milburn led a multi-agency criminal enforcement operation yielding 11 felony arrests, 69 misdemeanor arrests, three recovered stolen vehicles and 30 probation and parole checks.

Salvation Army Major Ed Covert accepted the Nonprofit of the Year award on behalf of the Corps that serves the San Jacinto Valley. He became a Salvation Army officer in 1957 and moved up through the ranks. Now living in Hemet, he has served throughout the western United States and many other places. He said the Salvation Army operates in 131 different countries, including Russia, Ukraine and Poland. “And yes, we are doing the same thing there we always do: ‘Heart to God, hand to man.’ God bless you.”

Grumpy Tom’s Pizzeria was established in 2015 by Mitch and Jim, the brothers that owned and operated Pride of Italy/Little Italy since 1995. It is currently owned and operated by Jessica Barth, Mitch’s daughter and Julie Baldridge, Mitch and Jim’s younger sister. The restaurant moved to its current location in the Stater Bros shopping center on State and Ramona Expressway in December of 2020. Jess and Julie are both local girls who grew up in the Valley and love being part of their community. They regularly donate to several local charities and organizations such as SJUSD, Valley Restart, the American Legion, the Sportsman Club and Valley-Wide Recreation and Park District to name a few.

Former Rotarian John Norman introduced Dr. Fox stating that she should be receiving a lifetime achievement award because she has been altruistic her entire life and has helped countless people in many different ways.

“Her values, her virtues and her honesty are second to none,” Norman said. “She is one of the most influential people in my life.”

Shultz said Fox’s name will be added to the perpetual plaque that is displayed at Emilio’s, where the awards dinner was held and where the club regularly meets.

The San Jacinto Rotary Club, which started in 1954, is one of the oldest Rotary Clubs in the Inland Empire. Shultz said as they look forward to a 68th year, “we will continue in our efforts to fulfill the Rotary ideal of ‘Service Above Self’ and will continue to recognize and applaud the achievements of those individuals who exemplify this ideal in their commitment to our community.”

The club meets every Wednesday at 12:15 p.m. at Emilio’s Restaurant, 2340 S. San Jacinto Ave. in San Jacinto. For more information, www.SanJacintoRotary.org or www.Rotary.com. 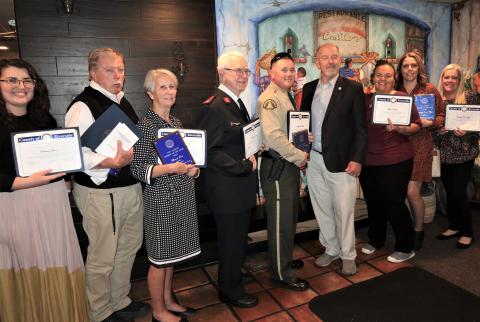 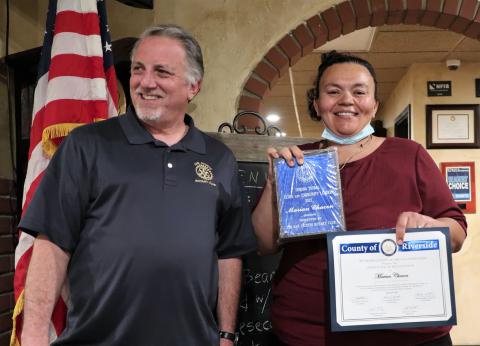 San Jacinto Rotary Club President Craig Shultz, left, with Soboba’s Kelli Hurtado, who accepted the community recognition award on behalf of her friend Marian Chacon who could not attend 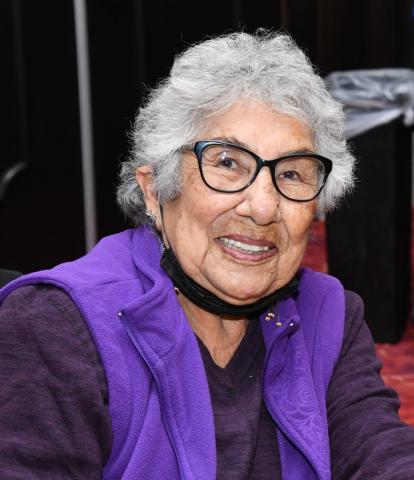