The ribbon cutting ceremony for the Soboba Aquatics Center at San Jacinto High School featured a crowd of excited students, staff and community members. Not just because the $6.5 million project was unveiled on August 30 but because a fundraiser was held to determine who would take the first jump into the pool.

Before the contest winner was announced, San Jacinto Unified School District Superintendent Diane Perez made some comments about the momentous occasion.

“We believe excellence comes through equity and access and having our district open its first pool is a way of signaling to everyone that our kids deserve what every other student deserves,” she said. “I’m overcome with emotion and overcome with the support of this community that stepped up. And no one did more than the Soboba Band of Luiseño Indians to make today possible.”

Salgado said it was great to see such a great turnout at her alma mater. Born and raised on the Soboba Reservation, she attended San Jacinto schools from kindergarten through high school.

“It has been a long time coming for this school to get a swimming pool and we as a tribe are so proud of the ability to help them do so,” she said.

Salgado, a former San Jacinto school board member, then presented a proclamation to San Jacinto Unified on behalf of the Soboba Band of Luiseño Indians which congratulated them on the completion of the new facility.

Jerry Peebles, president of the San Jacinto Education Foundation and alumnus of the high school, said he was pleased when the district decided to incorporate a First Jump Fundraiser for the nonprofit into the much-anticipated center’s grand opening.

“We are all volunteers so 100% of donations always goes to meeting any needs in the district,” said Peebles, who has been a member for 17 years.

Shortly before the ceremony began, $500 had been donated through a contest of who should take the first jump into the pool: SJUSD School Board President John Norman, Superintendent Diane Perez, San Jacinto High School’s principal Courtney Hall, ASB Director Antoinette Miles or Coach Aric Galliano. Norman and Perez were neck and neck in votes until the final donation from CR&R made it a tie. A total of $1,557 was raised from the event.

Norman commented on the beautiful new facility and said he was happy to share in the enthusiasm displayed by the crowd in attendance.

“But you really can’t do this kind of thing alone and we owe a debt of gratitude to Soboba,” he said.

Photos Courtesy of the Soboba Band of Luiseño Indians 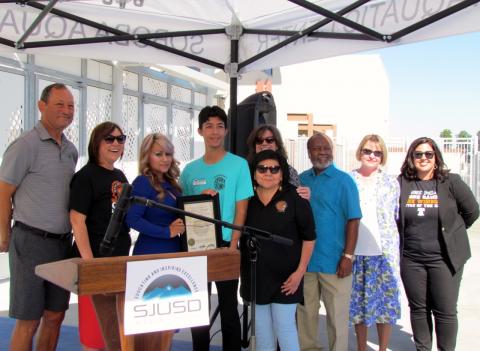