The tenth annual Lip Sync Contest to benefit a dozen local nonprofits has not gotten old. The song choices were fresh and inventive and the talented performers gave it their all at AC's Lounge inside the Soboba Casino on June 23. MCs Andrew Vallejos and Rose Salgado made the night entertaining and fun for all those involved, just as they have always done.

Presented by the Soboba Foundation and Soboba Casino, the three-hour event had the sold-out audience laughing, applauding and enjoying a fun-filled evening. Four top winners shared $10,000 in prize money while all other contestants went home with a $400 check for their charities. Taking the top prize of $5,000 and bragging rights for a full year was the Ramona Bowl which has participated each year since it began.

"The contest was originally started as a fundraiser for the Ramona Bowl – a great idea that Rose Salgado had," said Lori VanArsdale, president of the Ramona Bowl Amphitheatre. "We have some very talented and energetic volunteers at Ramona that love performing."

Second place and $2,500 was awarded to the San Jacinto Unified School District for their medley of hits that featured many different styles of music from a large crew, all tied together with Weird Al Yankovic's parody of "Another One Rides the Bus." This was their fifth appearance.

"Each year, we've come closer to winning a prize or moving up in the winner categories, so we keep coming back," said Dawn Lawrence, Public Information Officer for SJUSD. "Our entries have all been performed by members of our leadership team and they use any winnings towards donations or scholarships for needs within our community. We continue the cycle of ‘Soboba Gives Back!'"

The Mt. San Jacinto College Foundation earned third place and $1,500 for its performance of the dentist song from "Little Shop of Horrors." Micah Orloff, Dean of Academic Technology and Distance Education, took the lead as the dentist and did a tremendous job with the role. This was the foundation's third year and the prize money has already been earmarked for a Supplemental Instruction conference the college will host in the fall that will benefit MSJC students.

"We were very happy to have been part of such a great event," Orloff said. "Being able to contribute to what the team is passionate about – college student success – made it extra special. While being recognized for our performance with a third-place finish is quite an honor, it has only fueled the MSJC team to bring it stronger next year. Get your popcorn ready – we will be back!"

American Cancer Society/Relay for Life San Jacinto/Hemet paid tribute to Prince and received $1,000 for its fourth-place finish. The organization first appeared in the show in 2010.

"The prize money will go straight to the mission of the American Cancer Society to support the efforts and education, services, advocacy and research in the fight against cancer," said Cathi Hill, Community Manager, Relay for Life.

Judge Monica Herrera, who serves as Soboba Band of Luiseño Indians Tribal Council Secretary, was impressed with the ambitious props and inspirational message delivered by American Cancer Society Relay for Life Perris as they sang "Get Back Up Again" from the Trolls movie.

"You could take that on the road – it was super cute and I loved it," she told the group. "I can see you performing it in hospitals to help people feel better."

Miguel Sarasa, executive director of two organizations in the show, also got on stage with each of them. This is his fourth year and he said the event is truly a fun one to be part of and the support it provides nonprofits is much appreciated.

"Our groups spent many hours perfecting our routines," he said. "Funds received for T.H.E. Center will go directly into our general fund and those received for the Valley Queens Scholarship Foundation will go to support our titleholders with their scholarships."

Inter Tribal Sports entered for the first time and enjoyed having such a creative fundraising opportunity to fulfill its mission of "unifying tribal youth and communities through structured athletic programs while providing necessary resources and developing a strong foundation in native culture, leadership and wellness."

"We are stepping out on stage for the tribal youth that we serve," said Kimberly Castro, ITS Administrative Assistant. "This was such a unique and slightly crazy way for us to have fun raising funds for our tribal youth. It was also a way for us to practice what we preach by stepping outside of our comfort zones and onto the Lip Sync stage."

The Hemet-San Jacinto Valley Chamber of Commerce was the big winner last year and came to defend its title with a vengeance and a very provocative number.

"A portion of the prize money will be utilized for our program of work such as business workshops and community events," Chamber executive director Andy Anderson said. "The remaining portion will be used to make repairs at the chamber office. As is the case with most nonprofits, keeping up with facilities' maintenance projects is very tough with limited funding."

Diamond Valley Arts Council staff member and docent, Karlyn Zelinski, performed an energetic dance number to Taylor Swift's "Shake it Off" when she took the stage for the second year in a row to support the Harvard Street organization.

"The important thing for me is to participate – if we win anything, it's just the icing," she said.

EXCEED's executive assistant Sandra Aldridge said an enthusiastic group of employees that care about their clients were excited to get out into the community and educate the public on what the nonprofit does for adults with developmental disabilities. They dedicated their performance of Bruno Mars' "24K Magic" to their "magical" clients.

"We plan to use the money for an event to recognize the special achievements our clients have made this year," she said.

Next year promises to be just as entertaining as the city of Hemet accepted Salgado's challenge to participate for the first time. To order a DVD of this year's show for $10 plus shipping, please contact Vallejos at 951-654-2765 or avallejos@soboboa-nsn.gov.

Performers for the Ramona Bowl garnered a first-place win, and $5,000, at the 10th annual Lip Sync Contest presented by Soboba Foundation and Soboba Casino on June 23. The nonprofit has entered each year since the contest began 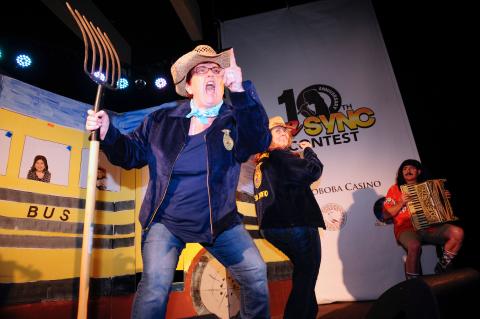 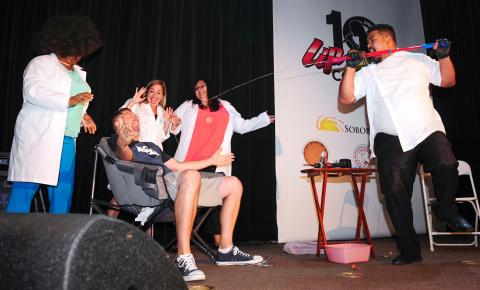 The Mt. San Jacinto College Foundation placed third for its performance of the dentist song from Little Shop of Horrors at the 10th annual Lip Sync Contest at Soboba on June 23 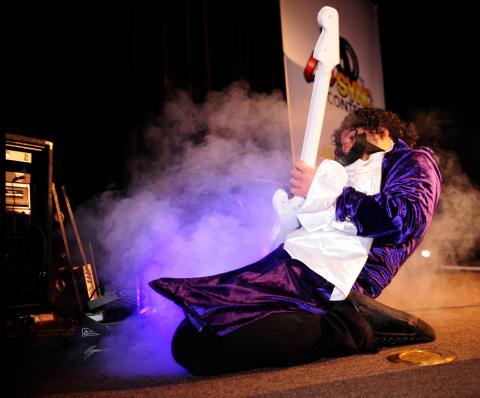 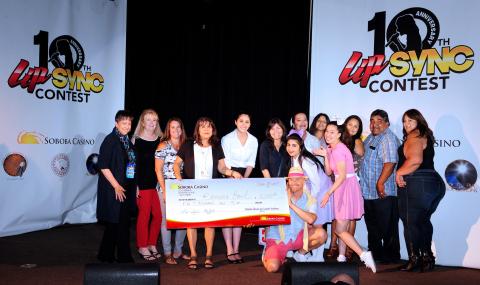 Members of the Soboba Foundation, at right, congratulate the Ramona Bowl with a big check for their first-place win at the 10th annual Lip Sync Contest on June 23. A dozen nonprofits performed and earned money for their causes