The 16th annual walk added some newcomers ◆ By Mike Hiles

Many years ago, young tribal members would hike the Soboba Reservation canyon for fun while exploring the hillsides for native plants and wildlife. In 2003, those children and teens who are all grown up now decided to start organized walks to help the younger generation enjoy the same experiences they remembered.

On May 4, about 70 participants joined in the 16th annual Elder & Youth Walk that started at The Oaks and traveled through the canyon to the Pechawa Dam. Several hiked the trail that was about three and a half miles long, but a pickup truck and trailer with hay bale seats was provided for anyone who preferred to sit or got tired along the route.

Driver Eloyd Rodriguez, who is part of the Cultural Department’s Traditional Land Resource Management Crew, grew up in the canyon and recalled the roundups that were held during his childhood.

“My grandma (Mary Soza) was the last one to move out of the area up there,” said Rodriguez, 43. Marian Chacon, who was one of those behind the revitalization of the canyon hikes, was joined by many relatives who were eager to spend the morning in the mountains.

“When the riverbed was running, we did this for many years,” said Chacon, 83. “We would walk along the trails that were cleared for the motorcycle races that were held up there. But the kids grew up and the trails changed and everyone got busy with other stuff.”

She said everyone would walk the trails about two weeks after the races ended but at that time it was not specifically an elder/youth walk. Benny Helms held the races for about five years in the 1970s.

“The families of the kids taking the walk would take food up to the canyon where the corrals were and fix a barbecue for everyone,” Chacon recalled.

One of her nephews, Junie Helms, recalled playing and taking walks in the canyon as he was growing up. Another nephew, Russell Gilmore, carved her the walking stick she has been using since 2003.

Tekla Diaz was looking forward to walking the course that she had run for fun the day before – a roundtrip of about seven miles. She said spending time with the elders is always inspiring.

The Soboba Cultural Department set up an array of healthy snacks and drinks at The Oaks for everyone to get properly fueled for the trip before it started. Department staff also organized the barbeque lunch that was served at the destination site.

Ann Brierty, the department’s new cultural programs coordinator, welcomed everyone alongside Erika Schenk who is the coordinator for Soboba’s Elders group.

“Thank you all for coming,” Schenk said. “This started way before my time but with the support of the elders and cultural department it continues to grow. It’s a time to enjoy being together and reminiscing about the canyon.”

Before heading off to the trail, Mike Madrigal offered a blessing for the Creator to watch over everyone on the journey.

“Be respectful and loving of each other and all the plants and animals we meet today,” he said, before offering a smudging to participants.

During the event, parents pointed out different sites to their young children as did Brierty who shared her knowledge of native plants.

Brierty pointed out black and white sage plants, as well as Indian potatoes, known to some as onion flowers. There were patches of yucca and quite a few areas on side slopes where chia was changing to brown from purple which she said is the best time to harvest the seeds.

“This is like a grocery store’s produce section out here,” she said. “If those stores ever go away, there will always be food here. But while it may be plentiful, Natives have always only gathered what is needed to ensure sustainability. We would not want to deplete these resources.”

Her mention of various plants elicited memories of cooking with them over the years.

“We baked yucca in breads and sautéed them with eggs and meat,” Chacon recalled. “It was a lot of work.”

An abundance of yellow-blossomed elderberry (or salco) trees are growing on the reservation. Raina Maciel said the berries, which are harvested in the fall, are dried out and used to treat fevers and other ailments. Alice Helms recalled using them all the time to reduce fevers in her children.

“I love seeing all this beauty – all the green and yellow up here; it’s gorgeous,” Helms said.

Indian paintbrushes and pink and purple lupine dotted the hillsides and there were red willows whose branches are cut to make ramadas. Hongos mushrooms were growing from a tree trunk.

Rodriguez stopped the truck to show a pile of vines that the Traditional Land Resource Management Crew had cut from the trees because they were dying out.

“The vines took over the trees and took all the water and sunlight from them; they were also packed with rats and snakes,” he explained. “It took our crew five years to get it all down.”

Along with saving some of the existing trees, the crew has also planted some new native plants and trees, such as the popular cottonwood. When needed, they water all the new plants by hand.

“We’re not just cutting down – we are replenishing them, too,” Rodriguez said. “For our next planting we will try to coordinate with Mother Earth and get them planted before the rains come to help them along.”

Brierty explained that it’s all part of the recycling process to take what is needed and then replace. Dolly Maxine Weiss, who was listening intently to all that Brierty was describing said she was glad she joined the outing because the reservation is so beautiful.

“And you’re never too old to learn and do something new,” said Weiss, 80.

It took about 90 minutes to get to the clearing near the rock dam that was built in 1934 according to a date that was etched into one of the stones. Chacon recalled a time when the water ran from one side of the riverbed to the other.

“When I was a kid, the river was never dry and I remember when the water used to run over the dam,” Maciel said. “It’s hard to believe that now.”

Orchards were also plentiful in the area but she said after the aqueduct was built and water was diverted from the reservation, everything dried up.

Although there was still some water running through the area due to February’s rain storms, it was low enough for children to roll up their pants’ legs and wade in it.

“I love seeing all the life come back – hearing the birds and seeing the plants,” Rosemary Morillo said.

John Briones walked the entire trip and was doing it for the first time.

“I did it for strength for my family – for my wife and children,” he said. “I try to walk my life like a quail: always a leader.” 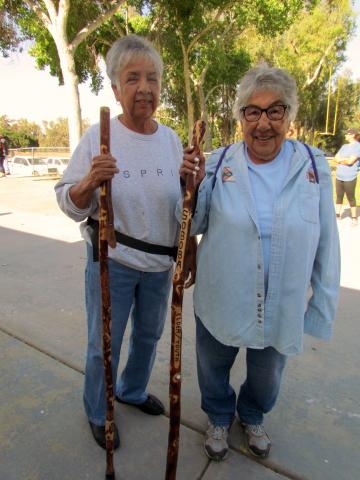 Rachel Miranda, left, and Marian Chacon get ready for the 16th annual Elder & Youth Walk at the Soboba Indian Reservation on May 4 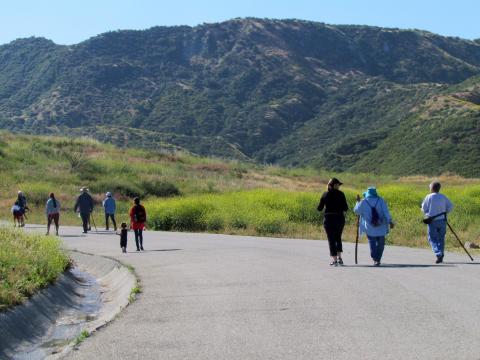 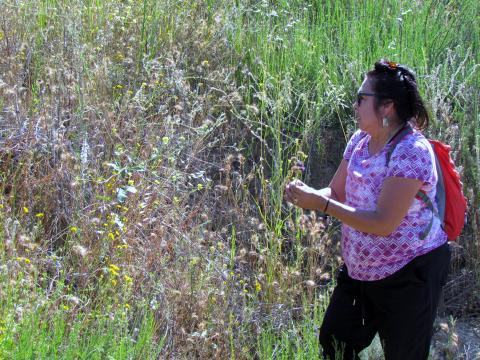 Ann Brierty, Soboba’s Cultural Department Coordinator, picked a chia plant to show the many seeds within each bud 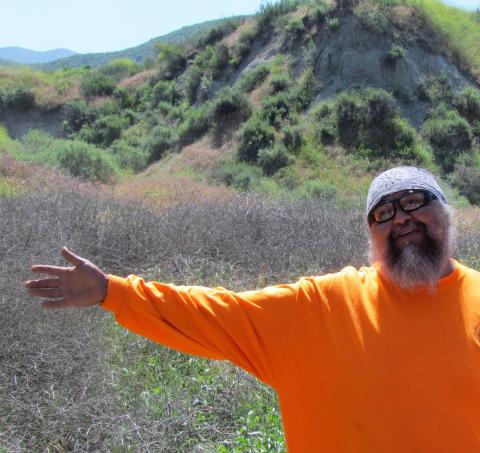 Some of the hikers at Soboba’s 16th annual Elder & Youth Walk enjoyed a walk in the riverbed that had a small stream of fresh, cool water running down toward the dam 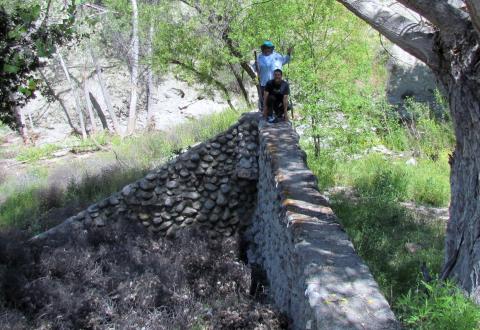 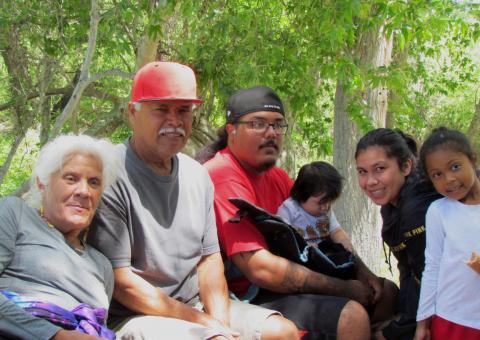 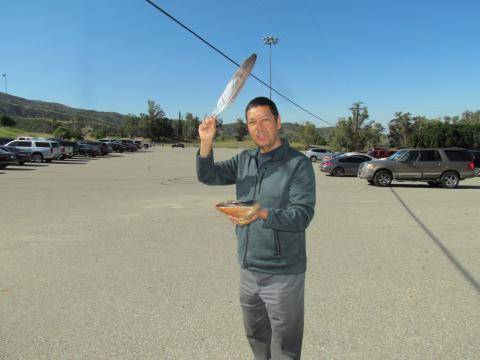 Mike Madrigal offered a smudging to participants of Soboba’s 16th annual Elder & Youth Walk on May 4, which began at The Oaks parking lot and took hikers deep into the canyon