As the Soboba Foundation fully supports education and the pursuit of higher education for all students within the San Jacinto Valley, the nonprofit honored eight local high school graduates with a $2,500 scholarship to give them a jumpstart on their higher education goals. Most of the checks and proclamations for each student were awarded during the individual school’s senior awards ceremonies, held prior to commencement.

Elijah Brookes was a stand-out straight A student who received many awards for academics and athletics as well as for two years of perfect attendance and being a Science Fair project winner. He will be attending the University of California, Santa Cruz in his pursuit of a career as a mechanical engineer because of his fascination with mathematics and a desire to be hands-on when it comes to work.

“Earning this scholarship means a lot,” Elijah said. “I have many goals I want to achieve, but it is extremely difficult to do so with college being so expensive. I was lucky to be blessed as a winner of this scholarship, making my life much easier, aiding me in the direction of success!”

One of his teachers recommended Elijah for the scholarship for proving to be a diligent and passionate thinker with studious attention to detail and willingness to push himself by doing far more than what was initially expected.

Erika Cortez was on the Principal’s Honor Roll with Academic Distinction, was named a CIEE Global Navigator Scholar and earned the RCOE Seal of Multiliteracy. She will attend the University of California, Santa Barbara as a Communications major with a minor in Italian Language & Culture with the plan to explore career options through internships to find her niche.

Her study abroad teacher in Italy said Erika proved to be a smart, open-minded and curious student who always gave her best, was enthusiastic and demonstrated positivity and good social skills.

Jenna DeWit excelled both academically and athletically, receiving the Riverside County Office of Education Academic Achievement Award. She played varsity tennis all four years where she was MVP, served as team captain and was named Hemet Sportsman’s Club Outstanding Female Athlete of the Fall 2021 season. Jenna also participated all four years in her school’s jazz and symphonic bands for which she received many awards of excellence.

She is headed to the University of California, San Diego to major in neurobiology before attending medical school to become a neurologist and help improve patients’ quality of life. Her teachers described her as being sweet, caring, and dedicated and as well as possessing a high level of personal integrity with a positive, hard-working attitude that isn’t something that can be taught.

“I greatly appreciate the scholarship, which will significantly help with my financial goals at UCSD,” Jenna said. “I plan to use the Soboba Foundation scholarship to help pay for my tuition at UCSD. Receiving this money is so helpful for my finances, especially since UCSD is around $30,000 per year. I do not have the financial means to easily pay for the expenses of UCSD, so the money the Soboba Foundation has given me will truly help me continue to save for my tuition.”

Briahna Guadamuz was on the honor roll and singled out for excellence in history and English and will attend the University of Redlands to explore career options that will meet her desire to help people and the planet.

She was recommended by her teachers because she is committed to her education and embraces the process of learning. They are confident Briahna will continue to demonstrate maturity and commitment to excellence in her academic and professional career.

“I’m really appreciative of this award because I have more time to focus on my future and studies and don’t have to worry much about paying for my education,” Briahna said. “I will value this scholarship by doing my best at the University of Redlands.”

Lanise Luna was named to multiple honor rolls, was recognized as a Student of the Month and won an AVID Write-Off competition at Noli Indian School, where she was the Class of 2022 Valedictorian.

She will major in biology at California State University, San Marcos with a goal of becoming a Marine Biologist to help improve our oceans, help marine animals that are in need of special care and help educate future generations about the animals.

Lanise was recommended by her teacher for her maturity to understand her role in different situations, her consideration for others and her desire to make a difference in her community, which gives rise to the greater vision she has for her future self.

She was surprised by the Soboba Foundation during commencement, where she was presented with the scholarship. “I remember wanting to cry out of gratefulness when they called my name,” Lanise said. “This scholarship is going to help me a lot to continue furthering my education and dreams. I’m so grateful that I have a great support system and people who will help me achieve my goals.”

Rafael Marquez made “A” Honor Roll all four years, was a National Honor Society member and excelled as a three sport Varsity athlete in football, wrestling and baseball. He will attend Vanguard University to major in kinesiology and be on its wrestling team with plans to become a physical therapist because he has seen the powerful changes therapy can make and he wants to be the one to make that change in others.

He was recommended by his teacher and coach as a truly great athlete who also excels academically and works hard with a natural willingness to do even more.

Aristeo Mendoza Rojas will attend La Sierra University as a criminal justice major with plans to enter the field of law enforcement either in the San Jacinto Valley or the San Diego area where he grew up. He was acknowledged for making positive changes in his life and his desire to make connections with young people to help them get on a positive path and change their lives for the better.

A teacher he worked with while a classroom aide said Aristeo’s positive personality is very contagious and uplifting and his strong leadership skills are admirable inside the classroom and within his community.

“This additional financial support helps my parents and I because it helps us release stress and weight off our shoulders and helps us to less worry about how we are going to pay for my future education,” Aristeo said.

Abigail Stevens maintained high grades and was honored as Student of the Month for her strong dedication. She will attend Mt. San Jacinto Community College on her path to becoming a social worker to counsel youth and encourage them to have a positive outlook on life and a desire to obtain it.

She was recommended by her physics teacher for accelerating through her coursework, stating Abigail will undoubtedly be successful in whatever path she follows.

The Soboba Foundation supports students with various programs and projects throughout the year in collaboration with local school districts. 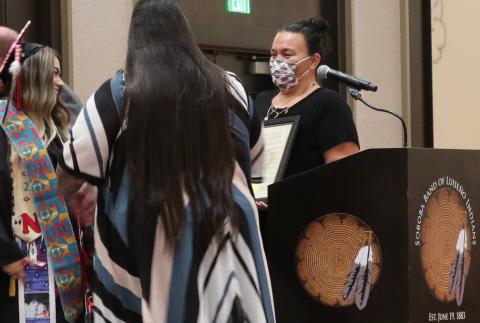 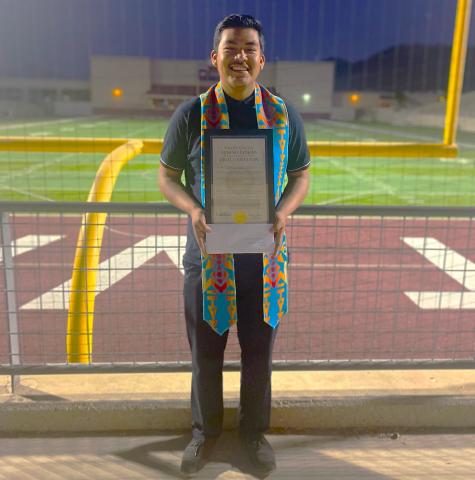 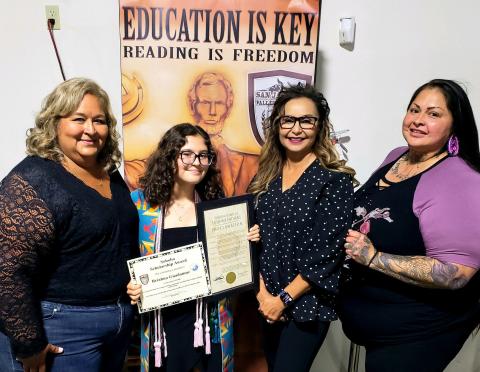