Soboba hosted its 11th NIAA Fastpitch Softball Tournament Sept. 17 through 19 and had a record number of teams competing. With 12 men’s teams and 13 women’s teams, ballfields at the Soboba Sports Complex and The Oaks were constantly filled throughout the weekend.

Each year, the Soboba Indian Reservation invites teams from all over North America to participate in the National Indian Athletic Association (NIAA) All Native Fastpitch Softball tournament. With the exception of last year, due to the COVID-19 pandemic shutting down sporting events, the tournaments at Soboba have always been well received.

Pat Placencia, one of several volunteer scorekeepers for the three days of games who also helps organize the event each year, said it wasn’t very difficult to find interested participants.

“We have a great committee who is well organized and Andrew (Vallejos) from the Foundation has been really helpful; we are good at what we do,” he said. “We just put out a call on the NIAA Facebook page and called our contacts for certain teams and we started getting sign-ups.”

Placencia added, “Everybody’s good to get out again – everybody was ready. I just like watching all of the games and teams.”

He said that most of the committee members have played the sport and that includes Geneva Mojado, who pitches for the Soboba women’s team.

“We’ve played in four tournaments so far this year at Rincon, Pala, Pechanga and Morongo,” she said. Mojado, who also serves as Soboba Tribal Council Vice-Chairwoman, said she was pleased with the way the tournament was going. She added this is the first one held since the Soboba Sports Complex Park was renovated so they were happy to show it off. “We have way more spectators this year and that’s great.”

Opening ceremonies at 4 p.m. on Sept. 17 included a ceremonial pitch made by Soboba Tribal Chairman Isaiah Vivanco, who was a pitcher on the Soboba men’s team with relatives and friends back in the day. He sent a strike directly over home plate to a cheering crowd.

“I used to put the team together and now my son puts it together with all his cousins on the team, they’re just carrying on the tradition,” he said.

Jason Cozart, Soboba Casino’s assistant general manager, is one of the pitchers on this year’s Soboba men’s team and said they had a lot of fun during their first game at 8 a.m. on Saturday. Wayne Nelson was on hand as a team supporter. All of them were awaiting the team’s next at-bat against a team playing their first game of the tournament at 11:30 a.m.

Cali Reds, from Rincon, won their first game on Saturday morning at the Sports Complex. Pitcher Austin Ravago of Pala said his team had about 10 players. Each team was guaranteed a three-game minimum, with each lasting seven innings or 90 minutes, whichever came first. A total of 54 games were played throughout the weekend with championship games on Sunday afternoon.

“Everyone got their money’s worth,” Mojado said. “They got a lot of playing in. We are thankful that we could offer good prize money due to some great sponsors.”

Shortstop Ethan Curo, of the Barona men’s team, played in the NIAA tournament at Soboba a couple years ago and said it’s always a lot of fun. He helped his team win their Friday night game against Redline from Oklahoma to continue playing Saturday morning in a game against the AZ Brewers.

“We definitely put the bat to the ball last night,” Curo said. “There is always a lot of good competition here.”

Lily Brandt, who works at the Soboba Cultural Department, is also a fan of the sport and was keeping score at the Sports Complex Field 1 on Saturday morning during a game between Red Leaf from South Dakota and the Morongo Mens Club (MMC).

“The sports complex staff did a great job prepping the fields and keeping things moving between games,” she said.

The Field 1 concessions stand was operated by Noli Indian School staff and students. Each four-hour shift throughout the weekend was staffed with two student volunteers. All proceeds from food and beverage sales are going to assist with AVID and ASB programs and the Noli Braves sports teams.

Students Addis Martin and Damien Vega, who were working the booth on Saturday morning, are on this year’s new football team and are just learning about each player’s strengths and how to work together as a team.

Sonia Modesto, who is the school’s ASB and Special Education coordinator, said they were grateful to everyone that provided funds for them to buy items for the concessions so that all the profits could benefit the students. “It was a big blessing for us because we didn’t have the usual opportunities to fundraise this past year,” she said. “This will help us with dances, uniforms, equipment, homecoming and help supplement the pre- and post-game nourishment for our players since they sometimes travel hours to and from games.”

Many former Noli students, who were playing in the tournament on Saturday, stopped by the booth to chat with Modesto and Desiree Cosby, who also works at the school’s special education department.

“NIAA is a great chance for tribes to come together and play,” Jesy Siglur, a Noli grad said. He plays first and third baseman for the Athletics. “The competition here is always good.”

Also on hand were volunteers from San Jacinto Unified School District who made their way around the two game-playing areas to keep any loose trash picked up. The complex’s pool and splash pad were open for siblings and others who wanted to stay cool between games. The Oaks had two inflatable water slides set up for those who were watching the women’s games there.

Mojado said having the Soboba Casino Resort hotel available for out-of-area teams worked out very well. Some had hours in between games and having comfortable accommodations close by made a huge difference. She said this is the second time they have hosted the tournament after the SCR opened and this year proved to be even more popular for teams that booked rooms.

After playing Friday night games, the Soboba women’s team faced off with Rezilience on Saturday morning, with Soboba emerging victorious. Another team, Dig It, was made up of mostly Soboba women. The team was formed for the very first tournament 11 years ago under the name of Share Bears. Two years ago, they became Dig It. Antiana Briones plays first base for the team and said there were about 20 team members who were playing this year. 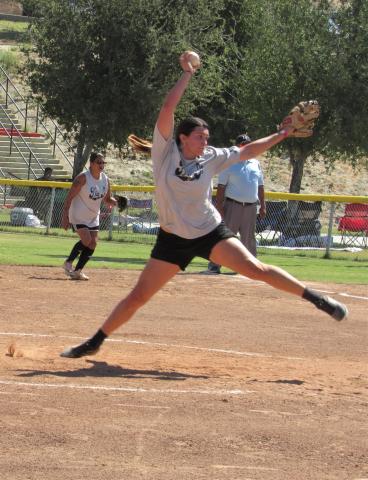 A Dig It pitcher throws a softball to try and strike out a batter from the Morongo women’s team during the NIAA 2021 All Native Fastpitch Softball tournament at Soboba Sept. 18 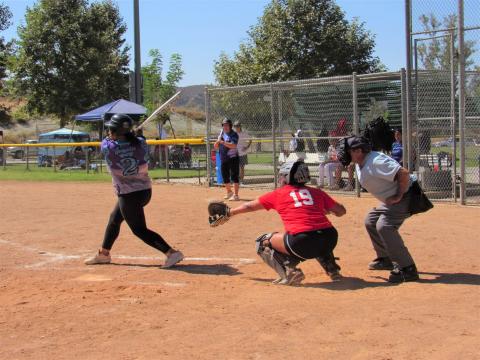 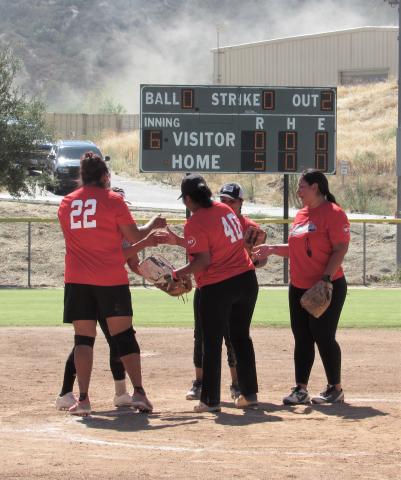 Soboba Women team members give each other a pep talk during competition on Saturday, Sept. 18 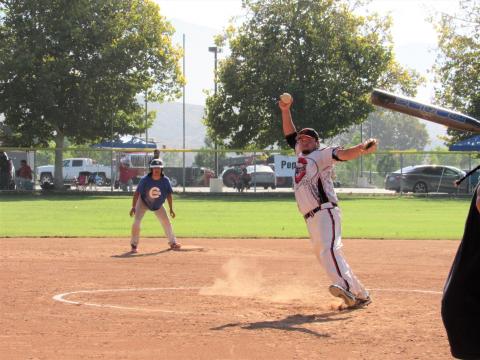 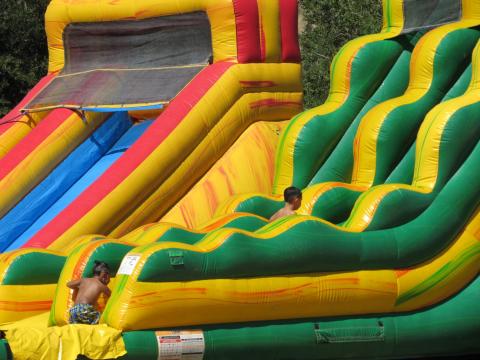 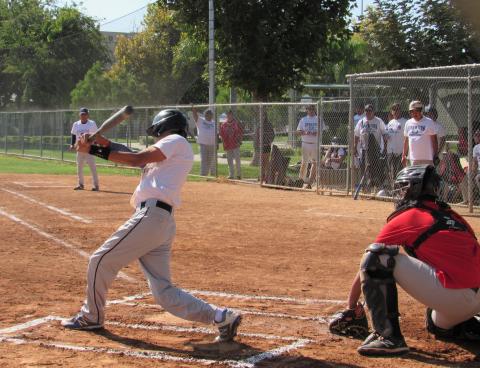 A member of the AZ Brewers team goes for a hit against Barona during tournament play at Soboba Sports Complex Sept. 18

The Morongo Mens Club were the first place team at the NIAA 2021 All Native Fastpitch Softball tournament at Soboba Sept. 17-19 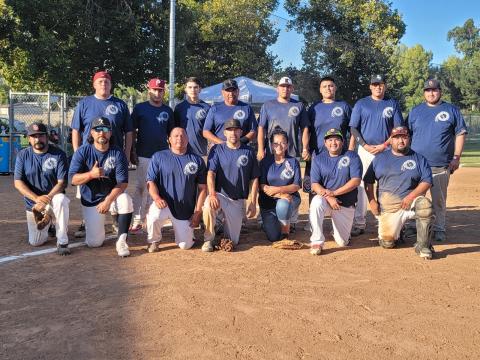 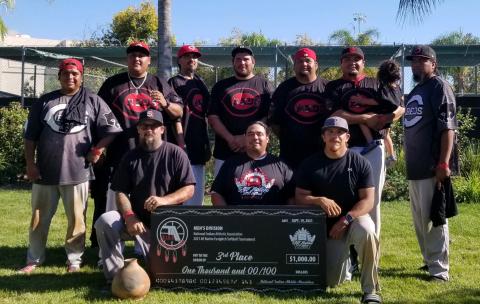 The Cali Reds finished third in the NIAA 2021 All Native Fastpitch Softball tournament at Soboba Sept. 17-19 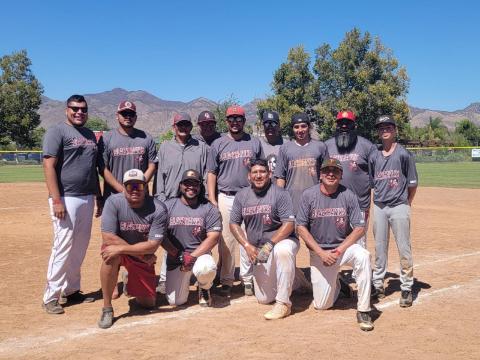 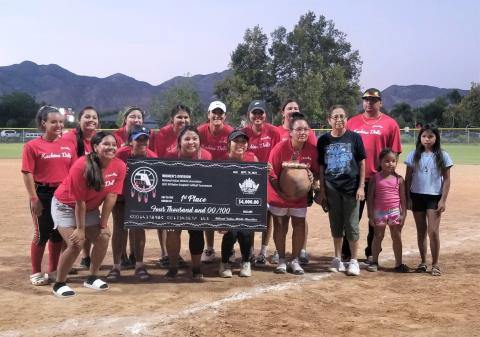 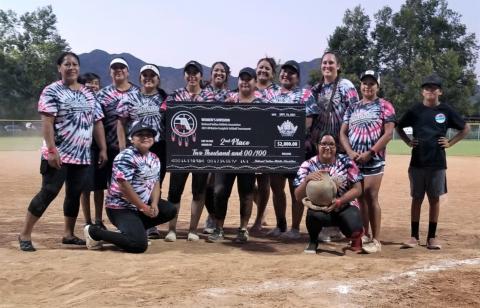 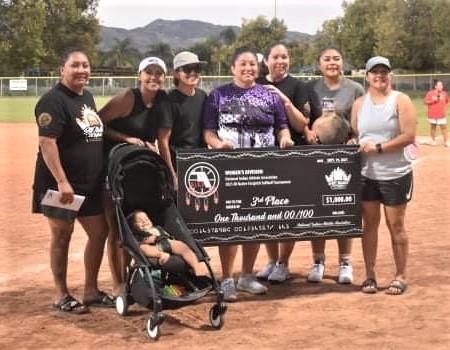