Prior to Monday’s Memorial Day Flag Raising ceremony at the Soboba Cemetery, miniature flags were placed at the gravesites of veterans. At dawn, members of the Soboba Fire Department raised the American flag, located on the center flagpole behind the Veterans’ Memorial, to full staff and then slowly lowered it to half-staff to honor America’s fallen servicemen and women.

After a morning mass by Father Earl Henley at St. Joseph’s Catholic Church, adjacent to the cemetery, Tribal members gathered at the shrine that is “dedicated to the memory of the Soboba Band of Luiseño Indians and non-Tribal members who gave their all for us.”

Father Henley said the patriotic wreath that stood next to the shrine was “adorned with love, memories and our faith.” He offered a blessing and prayer for those veterans.

“With reverence we visit this shrine where their bodies were placed within the womb of the earth to await their final day of glory,” he said. “We pause in silence to be united with them. May the breath of creation that surrounds these graves, trees, grass, earth, birds and sun, join us in prayer. May this pilgrimage remind us of what we already know: that nothing dies, rather life is transformed into new life.”

A roll call of the deceased veterans, most of which have been inscribed on the memorial, was read by Soboba Parks and Recreation Director Andy Silvas.

This was followed by the flag being raised to full staff once again in recognition of living military veterans who served their country. Junie Helms, who served in the U.S. Navy from 1967-1973, did the honors. Then members of the Soboba Fire Department raised the state of California flag as well as the Soboba Band of Luiseño Indians flag which all remained flying until sunset.

Soboba Tribal Chairman Isaiah Vivanco recognized other Tribal Council members in attendance and thanked Tribal member Marian Chacon for her years of dedication to making sure this event happens each year.
Chacon’s mother and aunt began the official Memorial Day ceremony during World War II, after Maria Helms’ two sons were killed in action overseas in 1944. Chacon said she is probably related to more than half of the veterans honored at the event.

She was happy to see the Soboba Youth Council step up and take over the annual program because she said it “needs to keep going.”

Vivanco said it is important to give the rightful dedication to those that have fallen and all family members that served in the military.

“And thank you to those veterans that are here today who have served and helped protect the rights and freedoms that we enjoy today. We thank you,” he said.

About 50 guests attended the ceremony to pay tribute to family members who had passed and to honor all those who had served our country. Norbit Arres served in the U.S. Navy during WWII and three of his 10 children – Carlene, Millie and Vicky – were among those at the ceremony to honor his memory and that of many uncles and cousins who also served.

“We come each year for so many reasons,” Millie Arres said. “We miss them and we want to honor them for sacrificing their lives for all of us and for our country.”

Soboba Tribal Council Treasurer Daniel Valdez was there with members of his family. His grandparents, Bruce and Gloria Cozart, both served in the U.S. Air Force. Valdez named his son and daughter after them as he was very close to them growing up.

“I think it’s awesome to be able to honor them for their service,” he said.

Guests were invited to brunch at the Soboba Sports Complex after the ceremony and enjoyed eggs, bacon, sausage, biscuits and gravy, muffins, fresh fruit, juice and coffee from Thomas Catering of San Jacinto. 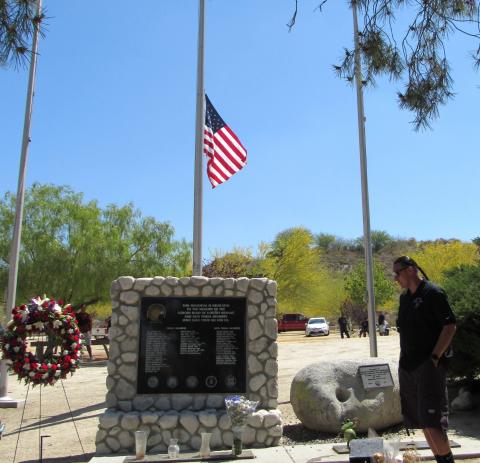 Soboba Parks and Recreation Director Andy Silvas pauses to reflect at the Soboba Veterans’ Memorial before the start of a Memorial Day ceremony on Monday, May 30 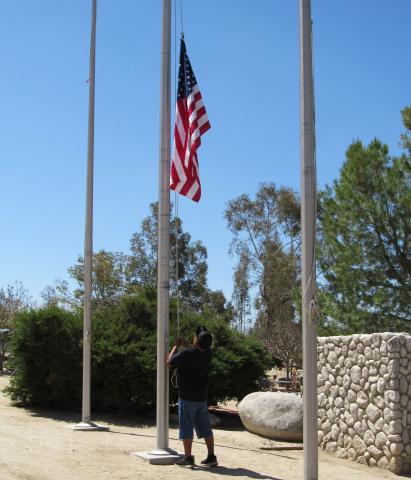 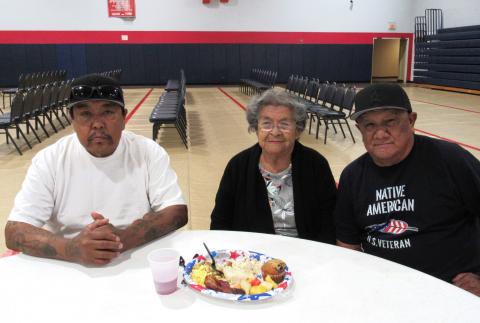 Alice Helms and her two sons, Neal, left and Junie, enjoy brunch at the Soboba Sports Complex after a Memorial Day service at Soboba Cemetery on Monday, May 30