Soboba Parks and Recreation hosted an End of Summer Bash to give families one last chance to get together for some old-fashioned fun before the school year takes hold and fall weather sets in. On August 17, tribal members and employees were invited to the Soboba Sports Complex pool area for games, activities, giveaways, grilled hot dogs and hamburgers and unlimited swimming.

DJ Mike played upbeat music while all ages gathered in the pool or around the perimeters at picnic tables to chat with friends and colleagues.

Doors opened at 5 p.m. and lots of children were ready to jump right in when they entered the gates. Jennifer Garcia, activities director for the Parks and Recreation department, helped coordinate the event for the second year.

"Last year we did it at the park area and had a barbecue and water slides; this year we have much more going on," she said.

There was a cake walk with lots of sweets going home with the winners. A chance to "dive for treasure" and other pool games continued through the evening as well as nearly 20 prizes for lucky ticket holders in attendance. Garcia said a grant from the Sponsorships department made it possible to expand this year's event.

Like most other parents in attendance, Steve Lopez spent his summer working and welcomed this opportunity to spend time with his family. His twin sons, Logan and John, have just started kindergarten at the Soboba Tribal Preschool. His eight-year-old daughter, Lavina, was busy playing in the pool while he and his sons started off with a bite to eat.

DeeDee Manzanilla has five children and brought her two youngest, Aureny (10) and Carlos (9) to the bash. She works for Soboba Family Services and Oak Grove Center for at-risk youth in Murrieta. She is also completing her master's degree in psychology.

"We wanted to come here just to enjoy ourselves and go swimming – even though we were just at the waterpark last week," she said.

Other than a cruise to Ensenada with her children, she stayed so busy with work and school this summer she didn't get to spend as much time as she would have liked with her family. She said she's looking forward to doing a lot of little trips throughout the year, which will fit in easier to all their schedules.

"My goal is to do more stuff with my own kids – and not just the families that I work with," Manzanilla said with a smile.

The summer's youth program had about 50 participants this year with outings and activities scheduled through the Parks and Recreation Department. Sisters Tanya and Sica Rivera were part of the Summer Youth Academy that worked with the youth as chaperones and assistants through the month of July. Five of their siblings were also at the bash.

Tanya, 14, a student at Noli Indian School, has already joined the volleyball team and is a member of the Associated Student Body and part of AVID. Sica, 13, also attends Noli and is looking forward to all her classes now that school has started. Both girls are active in sports, including softball.

Jesse Venegas, 11, is a member of the San Jacinto Valley Eagles football team and had been part of the summer youth program. But this day was all about spending time with his brothers. His mom, Antonia, said the youth summer program was great and being able to volunteer to go on field trips with them was a highlight of her summer.

More than 75 guests attended the End of Summer Bash during its five-hour run of family-friendly fun. Parks and Recreation Director Andy Silvas was enjoying time with his wife and children but was already busy thinking ahead to the many fall events that his department will be hosting, including the NIAA Fast-pitch Softball Tournament next month and its annual Halloween Carnival for tribal members in October. 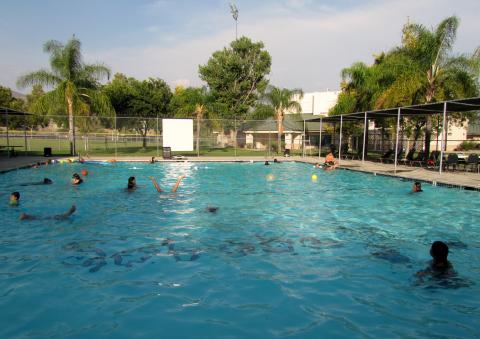 The Soboba Sports Complex pool was the place to be on Aug. 17 for the End of Summer Bash

A cake walk for all ages was one of the activities enjoyed by those that attended Soboba’s End of Summer Bash on Aug. 17 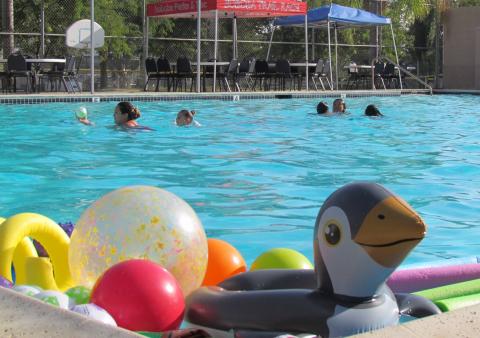