The group is focused on Native American culture ◆ By Mike Hiles

San Jacinto Unified School District established a Native American Advisory Council as a way to increase the involvement of parents, caregivers and community members in the decision-making process that direct affects the College and Career Readiness of its Native American students.

Carla Adame, a Family and Community Engagement Specialist for the district, said the advisory council has initiated the process of advising the district on the creation of new goals and actions that will help Native American students reach their full potential and academic success. SJUSD’s mission is “to educate and empower all students to achieve academic excellence, personal growth and social responsibility.” The council is one way the district can fulfill its mission regarding Native American students.

“Communicating SJUSD’s Student Data on Academic Performance, Attendance and Discipline is a crucial piece to opening the conversations that will lead to improving levels in each of the areas,” Adame said. “Thus far, the council has voiced the need for schools to increase cultural awareness among their students, staff and families.”

To that end, the district reached out to school principals and asked them to create plans for high-quality activities to be implemented during November’s National Native American Heritage Month. Details of these events were shared at the most recent council meeting in December.

Wayne Nelson led the Intertribal Bird Singers and Dancers in appearances at several schools in the district. He shared with students the meaning of certain songs and described the rattles used by singers. Other schools shared significant facts during weekly announcements. San Jacinto Elementary has a Culture Club that focused on Native Americans for the month. The high school welcomed two groups of bird singers and dancers, one led by Derek Duro and one by Nelson.

Johnna Valdez is a member of the Soboba Band of Luiseño Indians and has one child currently in high school and two grandchildren who attend Jose Antonio Estudillo Elementary School. She has been attending meetings since last spring, shortly after the council was formed.

She appreciates the group for trying to help others understand the sensitivity of Native American culture.

“Our culture differs from others in ways like our people are one with the universe; we consider all life a relative (four-legged, two-legged, winged, etc.),” Valdez said. “As a family – whether it’s parent, grandparent, aunt, uncle – we’re involved in our children’s lives and by understanding our culture, that makes it easier for the schools and less frustrating for us when it comes to our children. There are still so many stereotypes out there. We don’t live in Teepees – we have the same things everyone else has.”

Gomez wants to encourage others to attend meetings and participate in brainstorming ways that will improve connections between schools and Native American students and their families.

“This group is helping overcome barriers that have existed and have prevented past involvement,” Valdez said. “I’d like to see more school involvement with our culture, recognizing our culture as they do with others.”

The next meeting of the Native American Advisory Council is Feb. 6 from 4 to 5:30 p.m. at the San Jacinto High School Library and Technology Center, 500 Idyllwild Dr. Childcare, snacks and refreshments will be provided. 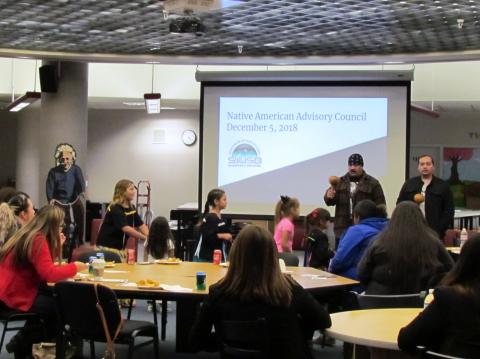 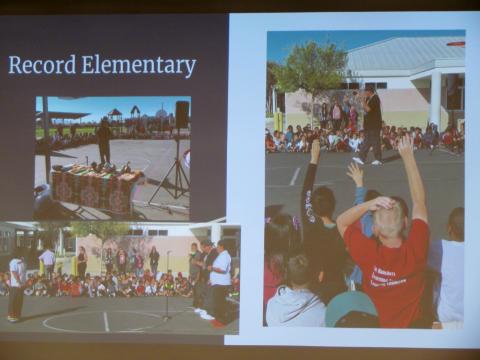 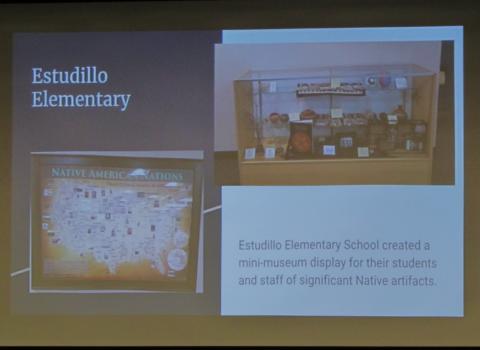 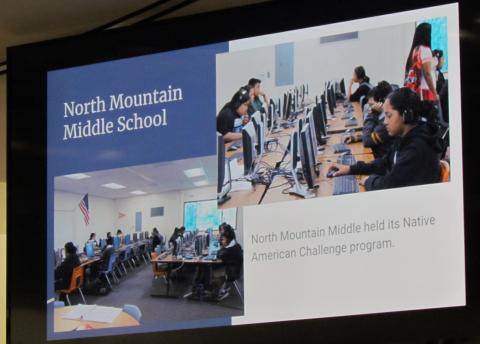 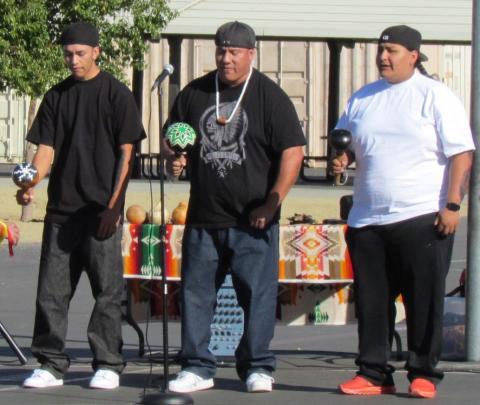 Record Elementary was one of the schools visited by the Intertribal Bird Singers and Dancers as a Native American awareness event in November. From left are Jericho Vivanco, Wayne Nelson and Delbert Briones