The Soboba Band of Luiseño Indians, its Foundation and Soboba Casino Resort joined forces to ensure that needy families would have a hearty meal this Thanksgiving. The San Jacinto Unified School District organized a drive-through event on the Friday before students were released for a weeklong break from school. The following day, Nov. 20, families who received vouchers through Hemet Unified School District programs lined up at the district office on Acacia to receive their meals.

“It's important for us to see the families that are receiving these meals,” Soboba Foundation President Dondi Silvas said. “It’s easy to give but to volunteer to help means so much more. We are grateful for all the help we had at both locations. I would like to give a special thanks to our sponsorship coordinator Andrew Vallejos for organizing these two events. It was great to see Tribal Executive Officer Steven Estrada along with Tribal Administration employee and

Tribal member Lynn Saenz. Soboba Casino Resort’s Assistant General manager and Tribal member Jason Cozart and some of his team members were also there to volunteer their time, which was great.”
Tribal members who joined in the giveaway for the first time were Wade Abbas and Dione Kitchen. Soboba Foundation board members, such as Secretary Antonia Briones-Venegas, readily gave their time to the cause and some brought along family members to help as well. Pitching in were Treasurer Julie Arrietta-Parcero and her husband Albert Parcero, Vice President Catherine “Cat” Modesto and her husband Ray Godinez and President Dondi Silvas with her son Joseph Burton. Also assisting, representing the Foundation and Soboba Tribal Council, were Treasurer Daniel Valdez and Chairman Isaiah Vivanco.

Modesto said she likes to help others. “It’s all about being able to bless people who don’t have much, giving back and working together for your community,” she said. “Everyone here has a smile on their face; it’s a good feeling. I’m grateful we are blessed enough to be able to bless others.”

The overwhelming message from those who were recipients of Soboba’s generosity was “thanks for giving” as 2,000 families throughout the San Jacinto Valley were treated to a turkey and all the fixings needed for a robust Thanksgiving Day feast. In addition to those with children attending schools at either of the valley’s districts, all charter schools as well as Valley Community Pantry and Noli Indian School students from non-gaming tribal families received the same abundant meal makings.

More than 100 volunteers started arriving at San Jacinto High School’s parking lot at least an hour before the giveaway event to prepare. Pallets of items were stacked high as helpers wheeled carts by each one in an assembly-line fashion to expedite distribution. Personnel from each site within the district set up a greeting line to welcome each vehicle and accept their voucher upon arrival. Some helpers, such as SJUSD Superintendent Dave Pyle, directed traffic throughout the afternoon.

“I don’t think the timing could be any better, this is a great sendoff for the holiday week,” Pyle said. “Soboba is an incredible partner to work with, such a powerful community partner and so giving.”

Vince Record was volunteering while wearing many hats, as a SJUSD employee, Hemet San Jacinto Chamber of Commerce chairman and a longtime resident.

“It’s awesome to have this donation from Soboba; it’s staggering how much food they give out,” he said. “Seeing people who are helping to give out the food get as much pleasure as the ones receiving it is very rewarding. A lot of families are going to have a great meal this year.”

SJUSD’s Director of Nutrition Services Tammy White oversaw the operation of about 30 workers from her department who had already worked a full day but stayed on to help distribute the food.

“We had a new employee say they had never seen a turnout of volunteers like this,” she said. “It’s something we know but it’s nice to hear someone express it. Everybody is having a good time and is thankful for each other and thankful to Soboba for all the food they provide.”

Carla Adame, Family & Community Engagement Specialist at the SJUSD Parent Center, worked closely with the schools to identify the families most in need. “First and foremost, Soboba continues to think of us and we’re super grateful for that. Look at all these families that don’t have to worry about where their Thanksgiving dinner will come from. This is such a feel-good event and so much fun after what we’ve all been through with (pandemic) closures and everything.”

At HUSD on Nov. 20, Emily Shaw was helping coordinate the drive-through giveaway. As the district’s Parent Resource Center’s director of wellness and community outreach, she was directly involved with referrals that came in for this year’s meal distribution.

“This is an amazing opportunity that Soboba offers us,” Shaw said. Along with families that picked up their meals, about 80 meals were delivered to HUSD students in outlying areas such as Idyllwild and Anza.

Parent Engagement Specialist Miriam Ortiz said there are a lot of unique situations in the community which makes her even more grateful for the Soboba sponsorship, allowing the district to use its resources in other much-needed ways. “Their support allows for us to do more with what we have and use our resources in a creative way,” she said. “I find it difficult to disconnect when I hear about some of the situations our students are in, but I find myself amazed by many of our families’ resilient attitudes.”

Organized a bit differently than the prior day, HUSD’s nutrition center had pre-packaged boxes of all non-perishable items ready for pick up. Warehouse manager Sonny Rachunok made sure helpers had full pallets of boxes to put in the trunks or back seats of vehicles as they passed through the double pick-up lines set up around canopies where volunteers assembled. Frozen items were kept inside refrigerated trucks until needed.

HUSD Public Information Officer Alexandrea Sponheim said aside from many volunteers provided by Soboba and its entities, there were about 10 from HUSD management and 10 from admin services as well as about eight from nutrition services and 15 parent liaisons from school sites. Additionally, six security workers were on traffic duty and other community members joined in throughout the three-hour event.

“We are so thankful to Soboba for the donations to make this happen,” Sponheim said. “This is not just about San Jacinto Unified or Hemet Unified, it’s about everyone wrapping their arms around our families.” 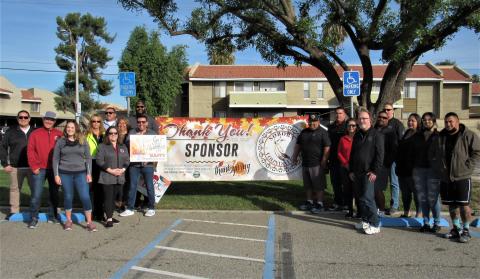 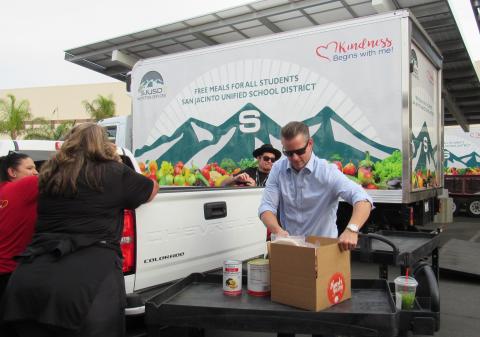 Soboba Tribal members Dondi Silvas and Wade Abbas assist SJUSD Superintendent Dave Pyle, at right and a SJUSD Nutrition Services worker, far left, in loading up a vehicle with turkey dinner and all the fixings during the Soboba turkey giveaway event at San Jacinto High School on Nov. 19 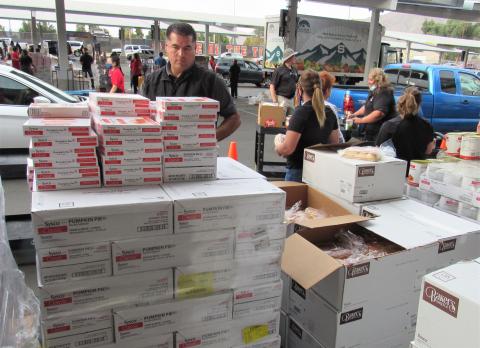 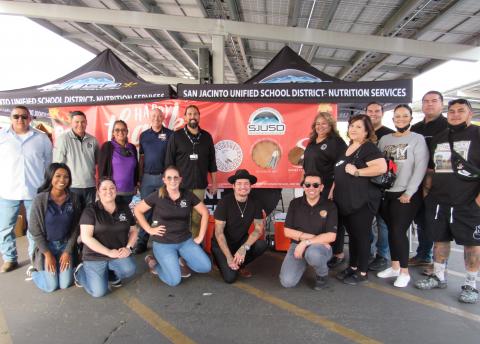 Soboba tribal members and workers volunteered at Hemet Unified School District on Nov. 20 to distribute about 1,000 Thanksgiving meals that were donated by the tribe to needy families 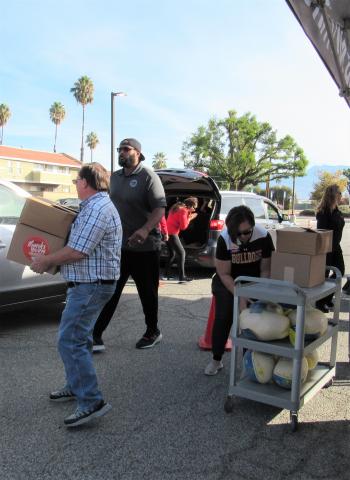 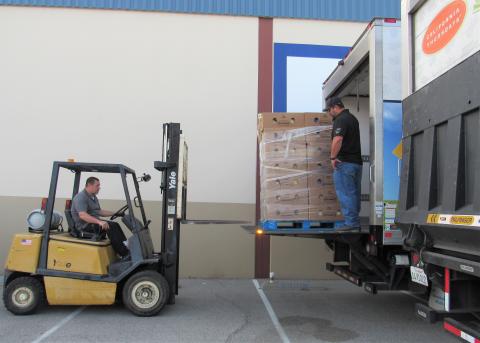 HUSD’s Nutrition Services warehouse manager, Sonny Rachunok, drives a forklift to the back of a refrigerated truck where head delivery driver Matt Perez has positioned more 22-pound turkeys for distribution on Nov. 20

Parent Liaison Elsa Pinto and counselor Jasmine Caoile from Clayton A. Record Elementary School in San Jacinto were among the greeters that welcomed vehicles to the Soboba turkey giveaway event for SJUSD families on Nov. 19