After five days of collecting toys at the Soboba Casino Resort Event Center, members of the Soboba Foundation were able to present local nonprofits with more than 5,300 toys to distribute through various community programs.

More than 300 volunteers were scheduled for two-hour shifts for each of the eight-hour days of the annual Soboba Gives Back! Toy Drive, accepting a $20-plus toy in exchange for $40 in free slot play.

Soboba Tribal Member Joey Placencia volunteered for double shifts on four of the days and worked six hours on the final day. He has been a regular participant for the past five years.

“My mother Doris, aunt Tara, cousin Tatiana, aunt Maria and uncle Pat also volunteered their time,” he said. “I do a ton of charity events. I was raised in a charitable spirit and my family has always given its time to various causes for as long as I can remember.

In past years, the event was held outdoors on the walkway leading up to the old casino’s entrance. This year, volunteers got to be indoors at the new facility and toys were stored in neighboring meeting rooms for scheduled pick-ups each week.

About 50 organizations were recipients of this year’s event. The Hemet Preschool was a new addition but there were many regulars that benefit from this program each year, including VIP Tots, Santa Rosa Band of Cahuilla Indians and Mt. San Jacinto College’s CARE and Phi Theta Kappa programs.

San Jacinto Unified School District counts on the Soboba Foundation to provide enough toys to bring a happy Christmas to 400 underserved families throughout the district’s eight elementary schools. Due to the volume of gifts involved, each year arrangements are made to fill a Soboba Band of Luiseño Indians’ bus with more than 1,000 toys which is unloaded during an “Unstuff the Bus” community event.

This was the 12th year SJUSD has participated in the toy drive and the fourth year it was held at the district’s warehouse, where about 300 community volunteers met on Dec. 9 to unstuff the bus and store all the toys inside the district’s warehouse. It took about an hour for all the toys to be passed along the double rows of helpers to reach the hands of those inside who were sorting by age group and gender as they received each toy.

Placencia and some of his family members volunteered to help unstuff the bus and he said his favorite part is seeing all the smiling faces on those that also enjoy helping out.

The district hosted a toy distribution event on Dec. 14 for families to pick up a bag of toys for all the children in their household. Enrollment has grown since 2007 and the increase in toy donations has supported that growth.

“The venue is fully decorated and volunteers from the Hemet/San Jacinto Chamber of Commerce help with cookie and juice distribution and a chance to sit on Santa’s lap for a photo,” SJUSD’s Communications Coordinator Dawn Lawrence said. “It’s not just about the toys but about family.”

She said that without Soboba’s support, the district would not be able to serve families in this way, adding that the district continues to have 82% of its student popular in low socioeconomic status.

“This annual toy distribution is extremely important to our youngest students and their families,” Lawrence said. “I don’t know what we would do without Soboba’s help.” Ruben Valdez, 9, was one of about 10 youths on board the bus who volunteered to remove all the toys.

“I like helping out because it’s for kids in need,” he said.

Jeff Penn, Executive Director for Cops 4 Kids & Communities, strives to build positive mentoring relationships between teens and members of the community through educational, athletic and leadership development programs. More than 25 of the program’s members were on hand to help unload the bus.

“We feel it is important for our youth members to give back to the community,” Penn said. “We want to make sure we are instilling the values in our youth members to help others – the whole idea of charity and philanthropy and giving first, and not expecting in return.”

Penn said that providing Christmas toys for children is a struggle for many low-income families and receiving toys from the Soboba Gives Back! program for the past seven years has been incredible.

“Through Soboba’s generous donation of toys, Cops 4 Kids & Communities has been able to serve hundreds of families in need by giving these toys to children during the holidays, where there might not be any otherwise,” Penn said.

“On December 23 we will go to the high poverty areas of our community and give out toys to kids of all ages. We hope that this act will empower kids to see beyond their circumstances.”

Soboba Foundation Vice President Dondi Silvas said being part of the event each year is an amazing feeling.

“I also help collect the toys and people often ask who gets the toys and when they find out they are really eager to help those less fortunate,” she said. “It’s a blessing to be able to give back.” 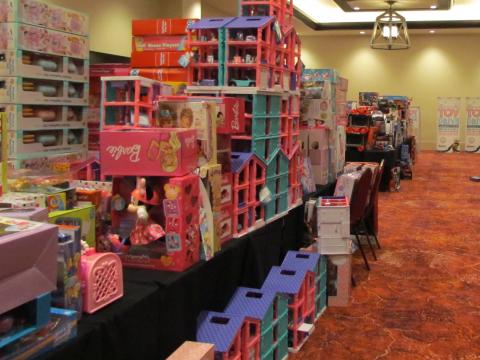 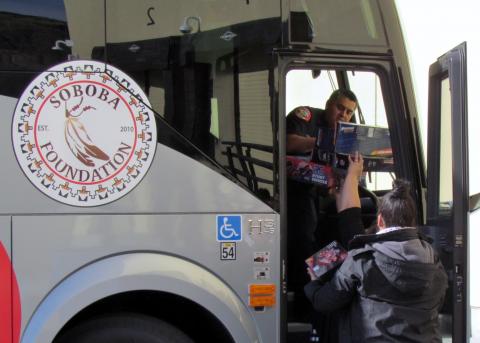 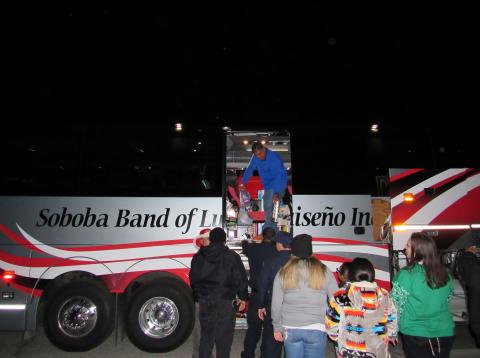 San Jacinto Unified School District’s annual “Unstuff the Bus” event was held on Dec. 9. More than 1,000 toys were removed from the bus with the help of about 300 community members, including Soboba Foundation members and tribal members of all ages 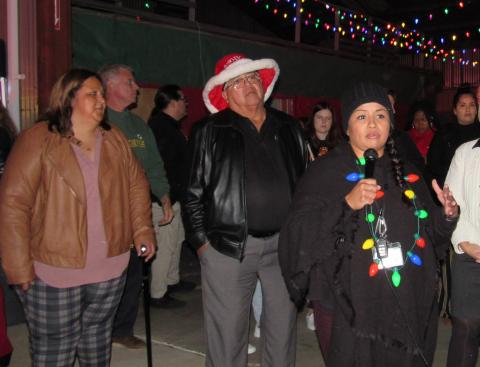 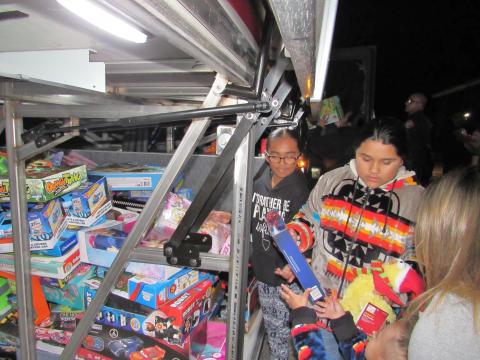 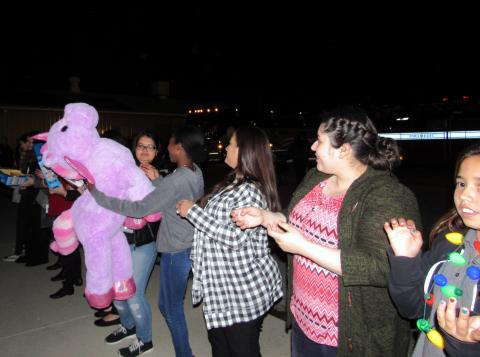 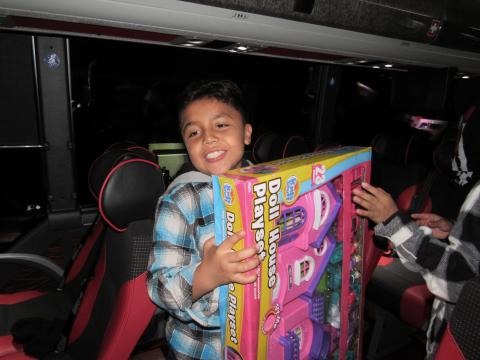 Ruben Valdez, 9, was one of several youths that helped unload toys from the bus to waiting community members who passed them along to be stored in San Jacinto Unified School District’s warehouse until its holiday distribution event on Dec. 14 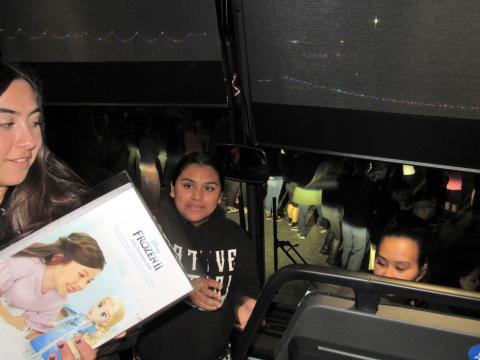 Several tribal youths helped unload toys from the bus to waiting community members, seen through the bus’ windshield, who passed them along in a human chain fashion for storage in San Jacinto Unified School District’s warehouse until its holiday distribution event on Dec. 14 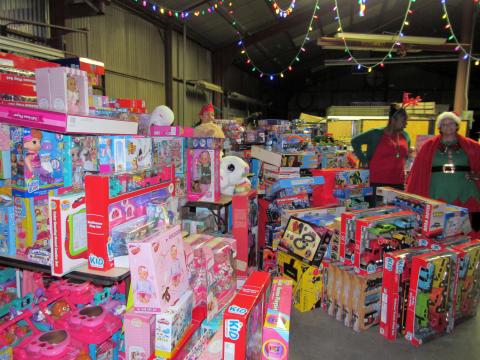 Several elves helped sort and stack the toys that arrived at the SJUSD warehouse after being passed along a human chain of about 300 community members during the annual “Unstuff the Bus” event on Dec. 9. More than 1,000 toys were donated to the district from the annual Soboba Gives Back! Toy Drive