Nearly 100 participants in the sixth annual Soboba Trail Race included seasoned marathoners, first-time "fun-run" kids and adults and runners who just wanted to see if they could finish the race on Sunday, May 21.

Organized by the Soboba Parks and Recreation Department, the race had been previously scheduled for February when foul weather made the course muddy, requiring a postponement. In spite of Sunday's high temperatures, many turned out to challenge themselves on the newly charted course.

When Abel Valdez, 9, finished the 5K, which started at 9 a.m. he continued for another loop to complete the 10K with his aunt, Mica Diaz, who does all her training on the reservation's hills.

"The hills are definitely the hardest part," said Diaz, 25, who has been a professional motocross racer for several years. "I enjoyed just being out there with everyone else because I'm usually up here alone about four times a week."

She uses the runs mostly for a good cardio workout but also to build up her endurance.

Geneva Mojado and her family – Jacob, son Daniel and daughter Gloria – joined the runners and although she ran a 10K two years ago, she opted for half that distance this time around.

"I have to do a slow and steady pace so I don't lose my momentum," she said. "It was pretty dusty out there, especially if you were running behind someone."

Soboba Parks and Recreation Director Andy Silvas said the course was marked and graded during the past week, after which the trail became really powdery.

"We always have to be careful for snakes and animals with the heat," he said. "We have two water stations out on the trail as well as the one at the start/finish line."

Fifteen volunteers, the majority being members of the Soboba Youth Council, helped set up and keep things flowing throughout the morning.

A few vendors set up booths at The Oaks parking lot, where the race started and ended. One of them provided details about a Drug Free World.

"The Truth About Drugs is an international drug information/education campaign to educate kids on the harmful effects of drugs which is sponsored by the Church of Scientology," said Muriel Dufresne, Community Affairs Director for Golden Era Productions near San Jacinto. "Education is the only answer against the war on drugs and education plays a vital role in preventing drug abuse. Golden Era Productions produces the educational audiovisual materials for the Foundation for a Drug Free World, which include award winning documentaries and public service announcements."

Seven members of the Truth About Drugs running team ran the 5K race and placed in their age divisions, winning handmade pottery trophies. Dufresne participated in the Fun Run.

"It was a mile around the baseball diamonds," she said. "Breathtaking views!"

Antonia Briones sold out of breakfast burritos at the food booth she set up while her kids ran in the races. Her eight-year-old, Kevin, was first over the finish line for his age group in the 5K and turned around and did the fun run, which started at 10 a.m.

"He's the athlete of the family," Briones said.

Castillo, of Santa Monica, said the heat was too much and she stopped after two loops of the course (10K).

"It was very hilly and hot," she said. Although Castillo does just a few trail races per year, she has traveled extensively for them. Last August she did Peru's Inca Trail to Machu Picchu and ran a recent trail race in Hawaii.

"I love to travel – I try to make it partially the journey and partially the race," said Castillo, 38, who has been an active runner for the past 10 years. "For trail races, the (finish) time is less relevant – it's more about the challenge." Frerichs, of El Segundo, has done the Los Angeles Marathon and other road races and trains every Saturday with USA Marathon Training at Griffith Park in Los Angeles.

"For marathons, I don't run for time – I'm just glad I can finish them," said Frerichs, 63. George Forman has worked for the Soboba Band of Luiseño Indians for many years but Sunday was the first time he tackled the trail race. He started running trails with horses in the 1980s but after he heard a cousin had run the San Francisco marathon in four hours he entered one (in 1985). Being from Northern California's Marin County, he is surrounded by hundreds of miles of trails but still travels to Alaska at the end of every year because the trail there is so spectacular.

"I will be running the Dipsea Race for the 27th time in June. It is the second oldest foot race in the United States," said Forman, 71.

He said the Soboba Trail Race presented a challenge to him since he didn't have sufficient time to acclimate himself to the warmer weather.

Angela Huerta sat near the finish line and applauded and high-fived almost every runner that passed her. Her husband, Francisco Huerta, chose to run the 25K and she was his head cheerleader.

"It's a tough race but it's neat to see so many people here," said Huerta, of Ontario.

One of her husband's running friends told him about the Soboba Trail Race and he decided to make it his first.

"He bought trail shoes, watched videos and got a $150 hydration pack," she said. "When we were driving up here he was trying to re-calibrate his body and mind. This was something new to him. Even though his buddy is here, they're not at the same pace."

Francisco had been unable to run (train) for the past three weeks due to illness but he completed the five loops/laps to finish the 25K in about three hours.

"It was hard but it's something I always wanted to do," he said. "But that last lap really hurt."

Results will be posted at parksandrec.soboba-nsn.gov/trail-race. 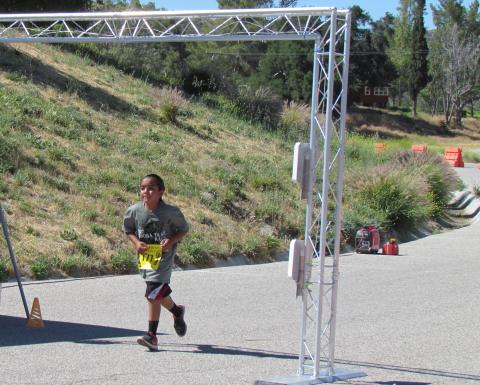 Abel Valdez, 9, was one of nearly 100 runners who crossed the finish line at the sixth annual Soboba Trail Race on May 21 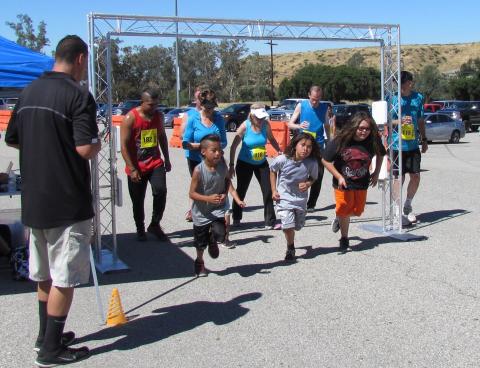 Several runners take off for the start of the Fun Run, a one-mile event during the sixth annual Soboba Trail Race on May 21 that included a 5K, 10K and 25K race 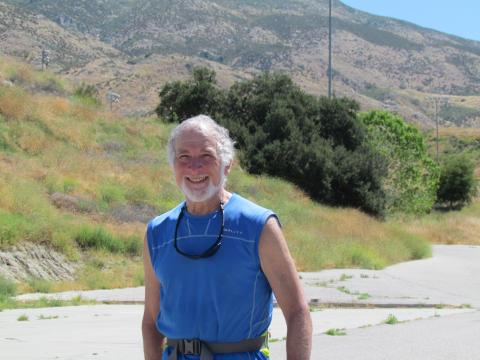 George Forman, 71, was one of many out-of-towners who ran the Soboba Trail Race for the first time 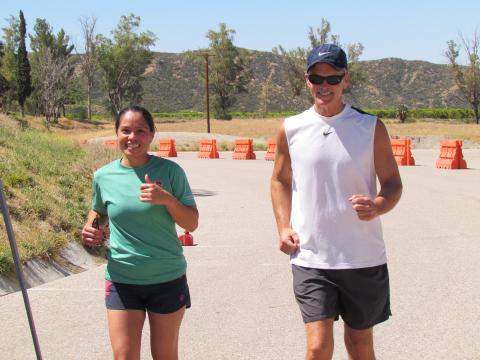 Ivy Castillo, left and Neil Frerichs ran the Soboba Trail Race for the first time and found the heat and the hills to be challenging 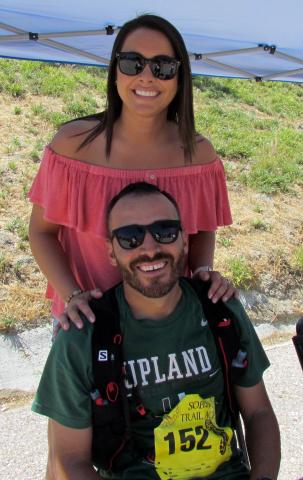 Angela Huerta congratulates her husband, Francisco, shortly after he completed a 25K run at the sixth annual Soboba Trail Race on Sunday, May 21 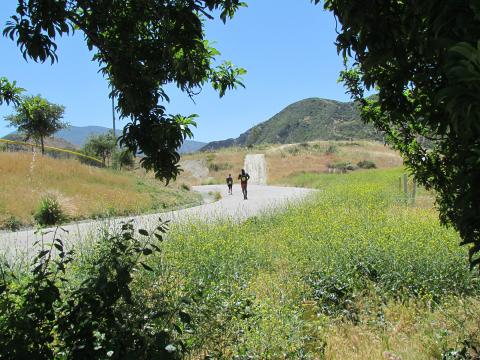