Being invited to play softball at the North American Indigenous Games in Toronto was exciting to Soboba Tribal Members Yawaywish (Yaway) MaMa Laupsa-Briones and Kaya Grace Ciccone-Cozart. Returning home with gold medals for Team California made the trip even more memorable.

With more than 5,000 athletes, 2,000 volunteers and a countless number of spectators and dignitaries, the NAIG is the largest continental sporting and cultural gathering of indigenous people. It took place in Toronto, Ontario, Canada from July 16 through 23.

Team California's 16U Female Softball team had to play five games before its gold medal match against Team Ontario, which ended with a 12-2 score.

Head coach Non Miguel, who has been coaching for community teams and reservation tournaments since 2003, said the idea to put together a team for the games began at the end of last year.

"We started thinking about all the girls we knew from neighboring reservations that we could possibly get to come try out for the team," said Miguel, who lives on the Morongo Reservation. "It was May when we knew we had enough girls to go."

Miguel held practices three Sundays a month at first but as travel ball season got underway it was more difficult to get all the girls to the same practices. Bunting and hitting were the skills/techniques he worked on the most with the team and it paid off.

"Our outstanding play of the series was when 11-year-old Eva Leivas came up to bat and we had bases loaded," Miguel recalled. "I talked to her before she went up to the plate and she said she wanted to bunt. So, with bases loaded, I told her I'm going to call a squeeze play. I told her she needed to bunt the ball toward first base. She got up there and on the first pitch she laid down the most perfect bunt down the first-base line, scored the runner on third and was safe at first. All the older girls were screaming for her so loud."

This isn't Miguel's first gold medal winning team, having taken a women's fast-pitch team to NAIG in 2005 in Denver and winning there. A member of that team, Jackie Nelson from Morongo, served as his assistant coach this year, handling all the pre-game prep.

Team California's manager was Cindy St. John, who is also from Morongo. She handled the scorebook, paperwork and all financial matters.

Yaway and Kaya were invited to join the team after tryouts were held. Yaway's dad, Jacob Briones and Kaya's dad, Jason Cozart are cousins and accompanied their daughters to Toronto.

"I had been to Canada in 1990 for the first Indigenous Games, which were held in Edmonton, Alberta," Cozart recalled. "We played in the 16U division for boys fast-pitch softball. Jacob was on that team as well. We did well and earned a silver medal."

Briones said the NAIG staff did a great job coordinating cultural workshops, dances and small gatherings throughout the week-long event. But the highlight of his trip was Yaway's first at-bat when she scored a homerun. Yaway agreed that was her favorite play of the games, too.

"I hit a home run, showing every team out there what California was made of," she said.

Briones has three other children but for now Yaway is the only one playing softball. Her older brother was a football player and her younger brother is now playing football and rugby. Her little sister is into soccer.

"So, if I'm not at work I'm usually at a game or practice or coming to or from," said Briones, who is an engineer with the Soboba Fire Department. "It's an amazing feeling to be able to give that support and opportunity to your children and watch them flourish."

Yaway is entering her sophomore year at Great Oak High School in Temecula and plays softball for the "Wolfpack."

"Currently, I am playing for a co-ed Fast-pitch league at Soboba and I also play with Soboba Women's Fast-pitch. I will be trying out for a couple of travel ball teams for this upcoming season," said Yaway, 15. "I have been playing softball for eight years. I love the thrill of making a difficult play or hitting a great hit. It's also given me the opportunity to meet wonderful people and to learn many teamwork and leadership skills."

The two positions Yaway plays most often are shortstop and third base. For Team California she played shortstop the entire time. Her stats at NAIG included 12 runs scored and 17 runs batted in (RBIs).

"Beside winning the gold medal, the highlight of being in Canada was the amazing experience of opening night," she said. "Seeing so many Native Americans in one place was incredible. We were given the opportunity to trade pins or any valuables we wanted. Having the confidence to trade with others, I was able to meet great athletes who travel far to play in the games. It was an unforgettable experience."

Cozart also enjoyed the wonderful opening ceremonies where dancers and singers from the Six Nations as well as other tribes performed. He said it was great to see everyone gathered together to celebrate sport and the spirit of competition.

"While there were other talented teams there, it was pretty clear from the start that Team California was the team to beat," said Cozart, who is head of table games at Soboba Casino. He has three daughters who all play softball.

Kaya will be playing softball at Hemet High School where she will be a freshman. She currently plays club ball with Firecrackers Perez/Casas 03 in Temecula. Her favorite part of the sport is meeting new people that also love to play.

Her regular position is catcher but she played center field for Team California.

"A highlight of the games was getting to hang out with the rest of my team," said Kaya, 14.

"These girls were the most outstanding girls to coach," Miguel said. "When they all finally got to be around each other as a team, the instant connection they all had with each other was just awesome. I would have to say with the past experiences these girls have playing they are most definitely, in my eyes, an elite team." 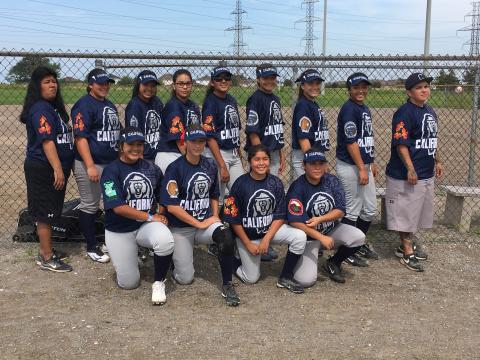 Team California at the 2017 North American Indigenous Games in Canada 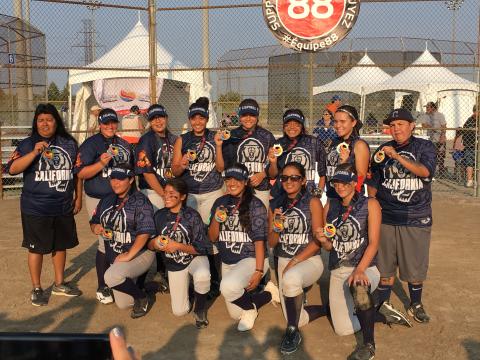 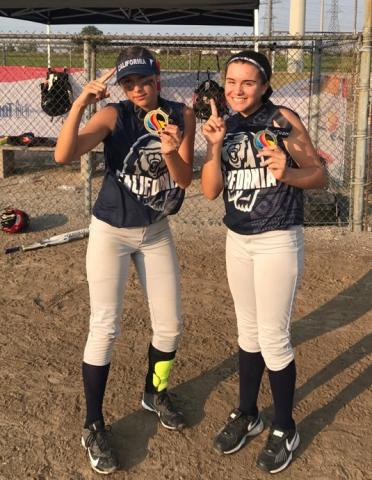