Spring Has Spring at Soboba Preschool

For the past two years, the Soboba Tribal Preschool has collaborated with the Riverside University Health System – Public Health to bring awareness about the value of nutrition to its young students. That partnership culminated with the county agency helping the school start a garden at its Soboba Indian Reservation location.

“Hosea Jones is a Health Education Assistant II with the Nutrition Education and Obesity Prevention (NEOP) program,” preschool director Dianne King explained. “She initiated the garden project last fall when she came in and offered an eight-week program for the kids on eating healthy.”

On Jones’ most recent visit to read to the kids about the importance of drinking water instead of sodas and sugary juices, she put King in contact with Ty Hall from the Kellogg Garden Products.

“We received 91 bags of donated soil, fertilizer and top soil which was more than enough for our garden,” King said.

Led by Landscaping Foreman Tony Rosalez, the Soboba Public Works Department constructed five wooden raised garden beds, each 8-ft. by 4-ft. Rosalez’s son, Shay, currently attends the preschool and his daughter, Treasure, graduated in 2010. Unlike containers, raised beds are bottomless, allowing for plants’ roots to extend into the native soil if needed, instead of becoming root-bound, which is common in traditional containers. The raised beds were filled with a loose, nutrient-rich garden soil, which helped with aeration and drainage prior to the kids adding seeds.

“Tony made all of the arrangements to get the irrigation going and prepared the planter boxes for the garden,” King said.

Anita Morillo, a former member of the culinary staff at the school’s kitchen, had a vision of farm-to-table foods for the students. King liked the idea and was eager to see the plan come to fruition.

The kindergartners learn about plant gasses in their science curriculum, so they are aware that plants take in and release oxygen and carbon dioxide. And with Jones’ many trainings, they know how important it is to put fruits and vegetables on their plates at meal time.

“I planted some strawberries because they are healthy,” said Gilbert Bentancourt, 6. “I plant a whole bunch of things at home like lettuce and cucumbers. I can help the earth; I’m going to save nature.”

“You have to bury the (strawberry) seeds, give it water and it has to be in the sun to make it grow,” said Anthony Torres, 6, about the new garden plants. “It will take about eight days to grow.”

Kindergarten teacher Cindy Lee said the nutrition program is tied to Riverside County’s Public Health program which provides books that match the curriculum of her class. She said for the past two years she has enjoyed Jones’ visits during which she shares posters, exercises and information with the children, all while she is dressed in a furry strawberry costume.

Jones said she loves visiting young children to explain the importance of healthy eating. She made her way around the planters to give each child a chance to dig and plant a few seeds for such crops as strawberries, squash, zucchini and pumpkins.

Noli Indian School science teacher, Jay Dagostino, was on hand to help the preschoolers get started. He also teaches agriculture at Noli and plans to bring his own students over to teach the classes how to care for their new garden.

“He currently manages the Noli garden and has a 4H club at Noli,” King said. “He brought over some seedlings to get our garden off to a good start and was very helpful with tips on how to keep it nourished.”

Rosalez said along with the seeds for children to watch things grow from scratch, a few starter plants were also added to a couple of the beds.

“James Shain is our main gardener at the preschool,” King said. “He will be working with the kindergartners to maintain the surroundings.”

After all the seeds were planted, King reminded the students it was now their responsibility to water them and take care of them. Although there are soakers to irrigate each box, she hopes children will enjoy taking watering cans out to the garden at the rear of the school and add a little more moisture during upcoming hot months. 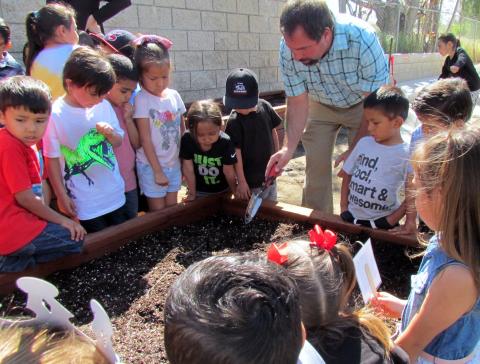 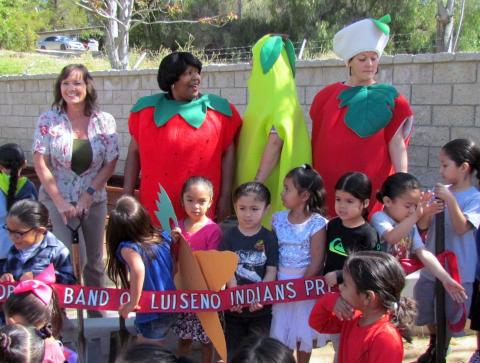 Mary Rose Morreo, center, was given the honor of cutting the red ribbon to officially open the Soboba Tribal Preschool garden on April 17. Her mom, Anita Morillo, launched the idea of farm-to-table food when she was a chef at the preschool’s kitchen. Standing behind Mary Rose to lend a hand are, from left, preschool director Dianne King, Health Education Assistant II Hosea Jones (strawberry), preschool teacher Melissa Arviso (pear) and classroom aide Amber Lopez (apple) 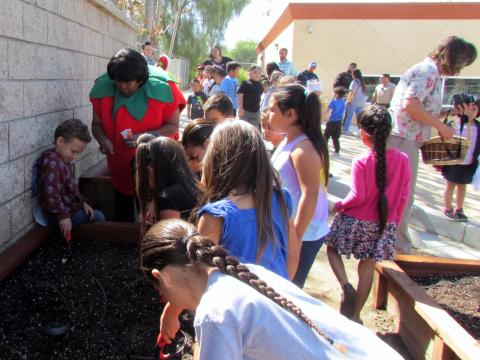 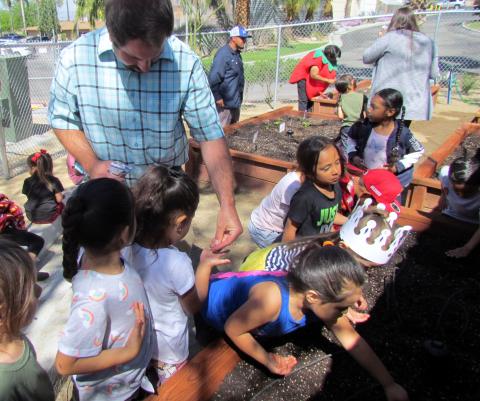